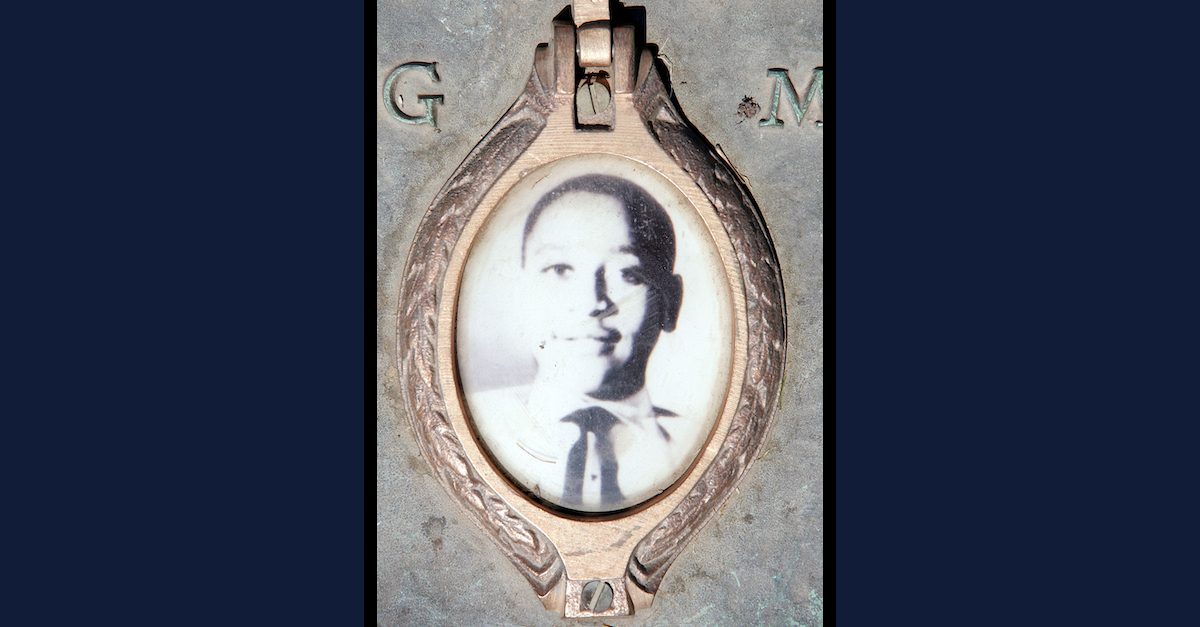 A photo of Emmett Till was included on the plaque that marks his gravesite at Burr Oak Cemetery on May 4, 2005 in Aslip, Illinois. (Photo by Scott Olson/Getty Images.)

A grand jury has refused to indict the white woman whose accusation set in motion the events that ended with the lynching and a subsequent open-casket funeral of Emmett Till in 1955, the Associated Press reported on Tuesday.

Carolyn Bryant Donham, now 87, accused the 14-year-old Black boy of making advances toward her in store in Money, Mississippi, in August 1955.  A cousin said Till, who was visiting the area from Illinois, whistled at the woman, the AP reported.  Donham also testified that Till “grabbed her and made a lewd comment,” according to the AP‘s retelling of the case’s tortured past.  (Till’s relatives denied that he grabbed Donham.)

A person who answered the phone at Richardson’s headquarters office in Greenville did not provide Law&Crime with a copy of the DA’s press release by the close of the day Tuesday.

The grand jury’s refusal to move forward with charges came despite the recent discovery of an unserved arrest warrant in a courthouse basement.

The warrant, dated Aug. 29, 1955, turned up in June, the AP previously reported.  It was not served when it was issued — reportedly because the sheriff at the time believed Donham needed to stay home to care for her two young children.  Donham was identified as “Mrs. Roy Bryant” on the document.

The AP noted that some warrants can go “stale” if not served and executed within a reasonable amount of time, citing University of Mississippi Law Professor Ronald J. Rychlak.  Rychlak suggested that a court would likely not honor the warrant even if a sheriff agreed to serve it.

Donham was once married to Roy Bryant.  He and his half-brother J.W. Milam were acquitted of murdering Till.  They later confessed to killing the boy in a magazine interview.

Till’s body was pulled from a river.  It had been weighted down by a 75-pound fan.

Donham’s unpublished memoir, which was obtained by the AP, reportedly says Donham tried to help Till by refusing to identify him as the person who allegedly bothered her when she was asked to do so in the middle of the night by her husband and Milam.  Donham reportedly claimed in the memoir that Till “volunteered that he was the one they were looking for,” the AP reported.

Till’s death has largely been viewed as the genesis of the the modern civil rights movement, CBS News recently noted.

Federal authorities exhumed Till’s body in 2005 after reopening the case in 2004, but they ascertained that the statute of limitations on any possible federal crime had long since expired.

“In February 2007, a Mississippi grand jury declined to indict anyone,” the AP said, “and the Justice Department announced it was closing the case.”

In December 2021, the DOJ summarized its re-investigation of the case this way:

In the summer of 1955, the 14-year-old Till traveled from Chicago to Money, Mississippi, to visit relatives. He stayed with family members in their home just east of Money. On Aug. 24, 1955, Till and approximately six other youths drove to a store in Money. A witness indicated that, contrary to long-standing belief about the events in and near the store, no one challenged Till to speak to or flirt with a white woman who was at the store. Nor did Till show a photo of a white girl to the men standing outside the store. Rather, Till bought some items in the store and left with one of his companions without incident. According to this witness, the woman then left the store, unhurried and undisturbed, at which time Till whistled at her. Till’s companions, aware of the dangers posed to Black men perceived to have violated the unwritten, racist code prevalent in the Jim Crow South, hurried to get Till away from the store.

A few days later, in the early morning hours of Aug. 28, Roy Bryant, his half-brother John William (J.W.) Milam, and at least one other person abducted Till from the home of his relatives. Three days later, a teenager fishing in the Tallahatchie River discovered Till’s brutally beaten body floating in the river. Till’s assailants had weighed him down with a 75-pound cotton gin fan, which they tied to his body with barbed wire.

The DOJ also said a “woman at the store,” who it did not identify, “testified under oath, but not in front of the jury, that Till had propositioned her and physically touched her hand, arm and waist while they were both inside the store.”

“In early 2017, new information emerged suggesting that the woman may have confessed to a professor, who later wrote a book about Till’s murder, that the account she provided to the state court in 1955 was untrue,” the DOJ went on.

That alleged recantation became troublesome, according to the DOJ’s most recent investigation. Its press release continued:

Specifically, the professor asserted that, during a 2008 interview with the woman, she handed him a transcript of her sworn 1955 testimony and said, “[t]hat part’s not true.” If credible, the professor’s assertion suggests that the woman lied in state court and confessed to having done so. The alleged recantation raised questions about whether the woman would be willing to acknowledge to federal authorities that her prior versions of events had been untruthful and whether she now would provide new and accurate information relating to the abduction and murder of Till.

When asked about the “alleged recantation,” the DOJ said the woman “denied to the FBI that she ever recanted her testimony and provided no information beyond what was uncovered during the previous federal investigation.”

“Although lying to the FBI is a federal offense, there is insufficient evidence to prove beyond a reasonable doubt that she lied to the FBI when she denied having recanted to the professor,” the DOJ concluded.  “There is insufficient evidence to prove that she ever told the professor that any part of her testimony was untrue. Although the professor represented that he had recorded two interviews with her, he provided the FBI with only one recording, which did not contain any recantation.”

News of the more recent grand jury’s declination to indict anyone over Till’s death was met with mixed reactions from Till’s relatives.

The Rev. Wheeler Parker, Jr., a cousin the AP described as “the last living witness” to the abduction, reportedly said (in part) that “the prosecutor tried his best” but that the “American justice system was and continues to be set up in such a way that [those involved] could not be brought to justice for their heinous crimes.”

Another of Till’s cousins, Ollie Gordon, reportedly told the AP that “[j]ustice is not always locking somebody up and throwing the keys away.”

“Ms. Donham has not gone to jail,” Gordon reportedly said. “But in many ways, I don’t think she’s had a pleasant life. I think each day she wakes up, she has to face the atrocities that have come because of her actions.”

Read the DOJ’s full analysis of its December 2021 decision not to pursue its own charges in the matter here: