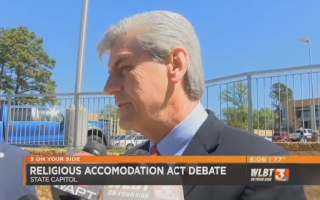 Governor Phil Bryant of Mississippi signed the Religious Liberty Accommodations Act into law on Tuesday, allowing individuals, including employers, owners of wedding-related businesses, and government employees, to refuse to conduct business relating to gay marriage or accommodation of transgender people because of a “sincerely held religious belief or moral conviction.”

Governor Bryant said in a statement that he signed the law “to protect sincerely held religious beliefs and moral convictions of individuals, organizations and private associations from discriminatory action by state government or its political subdivisions.” He did not make reference to individuals who may face discrimination as a result of the new law.

While the law is meant to keep people from being forced to act against their beliefs, it has come under fire from the LGBT community and its allies, who fear that it makes it permissible to discriminate against citizens who are exercising their constitutional rights. Bryant’s statement says the “bill does not limit any constitutionally protected rights or actions of any citizen of this state,” but allowing government clerks to refuse to grant marriage licenses to gay couples could certainly be an obstruction.

This could end up hurting the same individuals Bryant says he is protecting, as business owners who refuse to provide services to gay people could see a drop in customers. Business in North Carolina is already taking a hit after that state passed a law that forces transgender people to use restrooms designated for the gender of their birth. PayPal had announced plans to build a global operations center in North Carolina, but they issued a statement on Tuesday that they are cancelling those plans because of the new law.

The Mississippi law will go into effect on July 1, 2016. In the meantime, Reuters reported, organizations such as the ACLU are planning steps to fight it, which could include legal action.