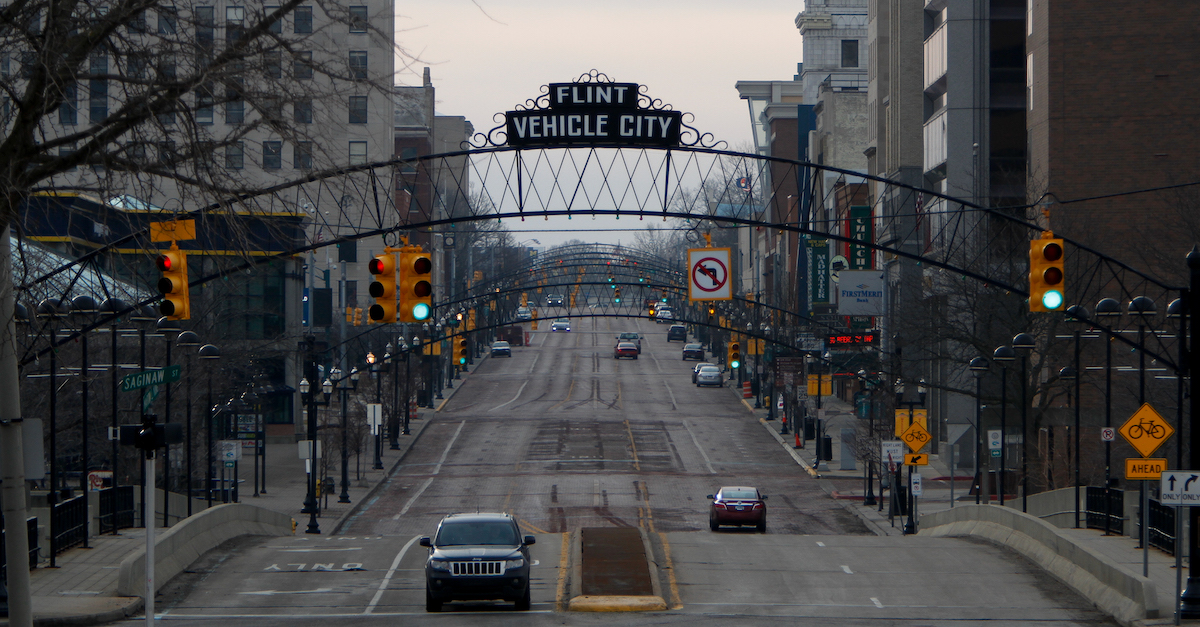 FLINT, MI – FEBRUARY 7: Saginaw Street in downtown is shown on February 7, 2016 in Flint, Michigan. Months ago the city told citizens they could use tap water if they boiled it first, but now say it must be filtered to remove lead. (Photo by Sarah Rice/Getty Images)

The Michigan Supreme Court has vacated the indictments of three state officials charged with crimes in connection with the Flint water crisis, finding that the judge who issued the indictments was not authorized to do so under Michigan law, and overruling a prior decision that denied preliminary examination hearings in such cases.

The ruling marks the latest blow against the state’s efforts to investigate — and hold accountable — those believed to be responsible for the disaster that left Flint residents scrambling to find safe drinking water. Following the 2014 decision to switch Flint’s water source from sources in Detroit to the Flint River, it was later determined that lead had leached into the pipes, exposing residents to unhealthy lead levels. The change was also suspected of causing a fatal outbreak of Legionnaires’ disease in the county that left 12 people dead.

Authorities at both the federal and state levels say that Flint now has clean water, although a Washington Post report from last year revealed that residents are still hesitant to drink it.

Michigan Attorney General Dana Nessel had secured indictments in 2021 against three people alleged to have played a role in the crisis: Nancy Peeler, the former manager of the Early Childhood Health Section of the state’s Department of Health and Human Services (DHHS); Richard L. Baird, the former “Transformation Manager” and senior advisor to former Governor Rick Snyder, a Republican; and Nicolas Lyon, a former director of the Michigan Department of Community Health and DHHS.

They were indicted pursuant to a Michigan law that allows a judge to act as a “one man grand jury” and issue criminal indictments. According to the ruling, the Michigan legislature enacted the statute specifically to address cases of government corruption and “conspiratorial criminal activity” because law enforcement agencies — bound by an “unwieldy and ineffective” 23-person grand jury under common law — were sometimes unable to “effectively and lawfully enforce the laws” against such criminality.

In its ruling Tuesday, the Michigan justices made their displeasure with the indictments clear.

“[F]or some reason, [Peeler, Baird, and Lyon] were not charged the way that almost everyone in Michigan is charged — with a criminal complaint issued by a prosecutor and followed by a preliminary examination in open court at which the accused can hear and challenge the prosecution’s evidence,” Chief Justice Bridget Mary McCormack wrote. “Instead, the prosecution chose to proceed with these cases using what have become known as the “one man grand jury” statutes[.]”

A Genesee County judge “considered the evidence not in a public courtroom but in secret, a Star Chamber comeback” before issuing charges, the justices wrote. “To this day, the defendants do not know what evidence the prosecution presented to convince the grand jury (i.e., juror) to charge them.”

Nessel had argued that the defendants weren’t entitled to a preliminary examination, during which prosecutors would normally be expected to make a showing of probable cause, because the judge issuing the indictment would have already made such a finding.

“But the argument confuses some basics,” the justices wrote, rejecting Nessel’s argument. “Probable cause to arrest (which MCL 767.4 requires and authorizes the judge to order) is different from probable cause to bindover (which must be found at a preliminary examination to bind the defendant over on felony charges).”

The justices noted that the probable cause required for a bindover is greater than what’s required for an arrest, and in doing so, overruled a 2018 Michigan Supreme Court decision that had held that the one-person grand jury rule served the same function as a preliminary examination.

The justices also ruled that a judge, on their own, cannot issue an indictment authorizing criminal charges against a defendant.

While the state legislature had, at one point, amended the laws to allow judges to issue indictments, it later removed that authority, the justices said.

“And the statute is clear about what it does authorize a judge to do,” the justices wrote in a close analysis of the statute. “If, after conducting the inquiry, ‘the judge shall be satisfied that any offense has been committed and that there is probable cause to suspect any person to be guilty thereof, he may cause the apprehension of such person by proper process[.]’ In other words, the judge may authorize an arrest warrant. The statute didn’t authorize the judge to issue an arrest warrant explicitly and issue an indictment at the same time implicitly.”

The justices also compared the one-man grand jury law to the statutes regarding grand juries made up of Michigan residents.

While the justices concluded that Michigan law does not allow a judge to issue a criminal indictment, Justice Richard Bernstein, in a concurrence, was even more pointed in his language, accusing Nessel of “invoking obscure statutes” to deprive Peeler, Baird, and Lyon of “their statutory right to a preliminary examination.”

Nessel’s argument — that the state legislature had given the Attorney General discretion to “opt out” of a preliminary hearing — is “quite alarming,” Bernstein wrote.

“[W]ere it true, the prosecution would have the power to decide whether to grant a defendant permission to probe and challenge the charges against them before being formally indicted,” Bernstein continued. “Such a result runs afoul of the basic notions of fairness that underlie our adversarial system. I do not believe we can tolerate such a procedural offense.”

Bernstein acknowledged that the ruling would only further delay justice to Flint residents, who he said have suffered “an unconscionable injustice.”

Calling the Flint water crisis “one of this country’s greatest betrayals of citizens by their government,” Bernstein noted that officials allegedly manipulated data evidence of water contamination and lied to residents.

“[T]he prosecution of these defendants must adhere to proper procedural requirements because of the magnitude of the harm that was done to Flint residents,” he wrote, insisting that following criminal procedure rules is “arguably most necessary in cases of great public significance, particularly where the charged crimes have been characterized as especially heinous and where the court proceedings are likely to be heavily scrutinized by the general public. In such cases, adherence to proper procedure serves as a guarantee to the general public that Michigan’s courts can be trusted to produce fair and impartial rulings for all defendants, regardless of the severity of the charged crime.”

“The tenets of our system of criminal procedure are only as strong as our commitment to abide by them,” he added. “The prosecution cannot simply cut corners in order to prosecute defendants more efficiently. To allow otherwise would be repugnant to the foundational principles of our judicial system.”

In an effort to place Flint in a larger historical context, Bernstein wrote:

In the end, such a prominent criminal prosecution will have a significant impact on the public at large. This criminal prosecution will serve as a historical record. Whether we realize it or not, courts provide historical context to consequential moments in history. What is happening before us cannot be understated. Former state officials, some of whom were elected, are being criminally prosecuted for their alleged roles in perpetrating an egregious injustice that resulted in the various ailments and even deaths of the people they served or represented. Future generations will look to this record as a critical and impartial answer to the question: what happened in Flint? For both their sake and ours, we should leave no question unanswered and no stone unturned.

Peeler and Baird had requested a preliminary examination, and Lyon had moved to dismiss. The justices granted all three requests and remanded the cases back down to the Genesee Circuit Court.

When asked for comment, a representative from Nessel’s office emailed Law&Crime a brief reply: “The prosecution team is reviewing the opinion from the court.”

Michigan Supreme Court Justice Elizabeth Clement did not participate in the decision due to her prior involvement as chief legal counsel for Snyder.