Michigan Judge Tosses Threat of Terrorism Charge Against 3 Men Accused of Plotting to Kidnap Gov. Whitmer, But Other Charges Remain 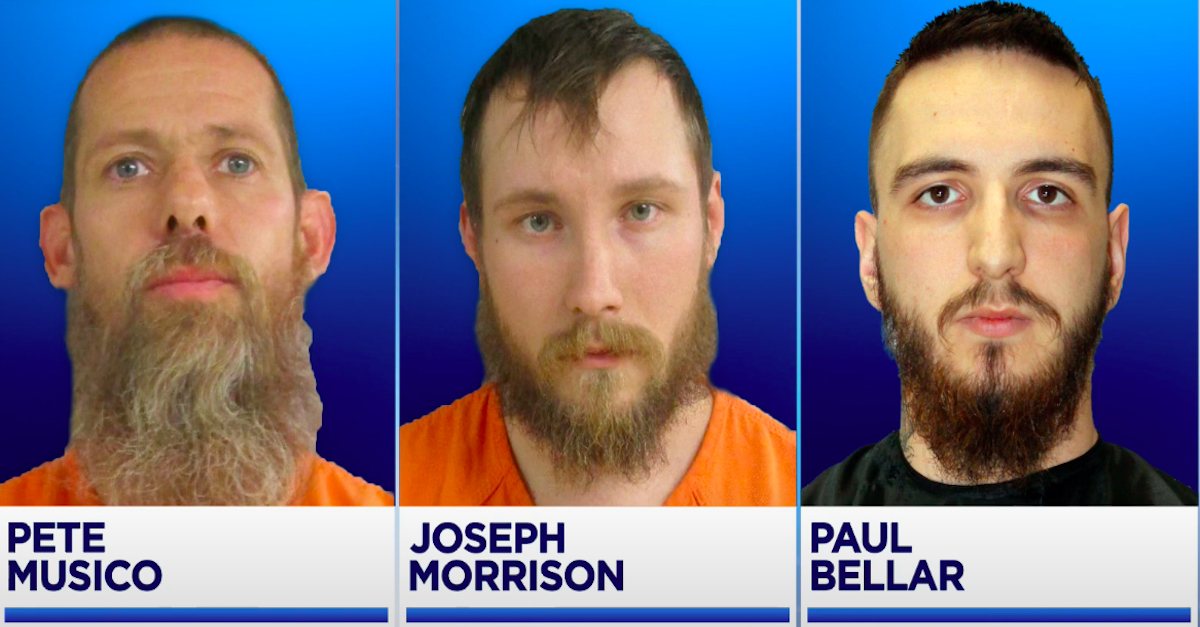 A county judge in Michigan on Monday ruled that three men accused of being linked to a militia group’s plot to kidnap and potentially assassinate Gov. Gretchen Whitmer (D) would not face threat of terrorism charges, the Detroit News reported.

Jackson County Judge Michael Klaeren of the 12th District Court dismissed the terrorism charge against Joseph Morrison, 42, and Pete Musico, 36, while declining state prosecutors’ request to add it to the charges already facing Paul Bellar, 21. The threat of terrorism charge carries a maximum possible sentence of 20 years in prison.

“There has to be some form of intent here to incite mayhem,” Klaeren said during Monday’s preliminary proceeding.

Klaeren did find, however, there was sufficient evidence for all three men to be tried on charges of providing material support for terrorist acts, gang membership, and using a firearm during a felony, the Associated Press reported.

“The defendants are joined at the hip here,” Klaeren said from the bench before issuing his ruling. “The prosecution did a good job in establishing who knew what and when.”

Citing to accusations that the three men allegedly allowed the militia—known as the Wolverine Watchmen—to use their properties as training sites for the planned attack, Klaeren said their actions evinced far more than just hyperbolic talk.

“The intent is so clear that these individuals were going to do more than spout off threats to each other,” he said.

He also noted that the defendants utilized a “multi-tiered vetting process, secret means of communication, required training and exclusive membership” and “repeatedly expose[d] their expertise to others” during at least seven prep and training sessions,” per the Detroit News.

Four other men have also been charged by state prosecutors for allegedly offering material assistance to the Wolverine Watchmen in furtherance of their kidnapping plot: Shawn Fix, Michael Null, William Null and Eric Molitor.

The FBI in October arrested and charged six members of the militia group—Adam Fox, Barry Croft, Ty Garbin, Kaleb Franks, Daniel Harris, and Brandon Caserta—alleging they began planning to target the first-term governor at her vacation home in response to stay-at-home orders aimed at curtailing the spread of the COVID-19 pandemic. The ensuing scheme entailed extensive plotting, training and equipment.

According to an FBI affidavit, the group’s members went on several surveillance trips, devised a strategy to hinder police response times by blowing up a bridge with explosive charges, and purchasing supplies—including an 800,000-volt taser.

Garbin entered a guilty plea to a conspiracy charge in January.