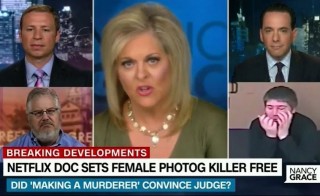 Brendan Dassey, who had been found guilty along with Steven Avery in the murder of Teresa Halbach, had his conviction overturned on Friday, and Nancy Grace was all over it on her show Monday night. Judge William Duffin had found that Dassey’s videotaped confession was involuntary, but Grace didn’t see it that way. Certainly, prosecutor Ken Kratz, who was her guest on the show, didn’t agree with the decision either. While those in favor of Judge Duffin’s decision insisted that police used improper methods to get information from Dassey, Grace and Kratz strongly disagreed.

Grace’s other guests insisted that Dassey’s confession was coerced because of the “totality of the circumstances,” between his low IQ, not having an attorney present in the room, and police supposedly making Dassey promises. Kratz disagreed. He said police specifically told Dassey to tell the truth, and that a magistrate acknowledged that no promises were made. “[T]elling the truth or imploring somebody to tell the truth is not the same as making promises, or making inducements, or threatening them,” Kratz said, “and absolutely is not rendering the statement involuntary.”