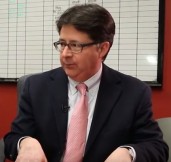 “This stuff sort of drives me nuts!” Dean Strang interjected. The typically calm and composed former trial attorney for Steven Avery, of Making a Murderer infamy, spoke with his most lively tone to date in an interview with Chicago’s WGN Radio.

In the weeks since the hit Netflix series debuted, various media outlets including Huffington Post, The New York Times have pointed out potentially incriminating evidence that filmmakers Laura Ricciardi and Moira Demos left out of the true crime documentary. The missing evidence includes: Steven Avery’s purchase of handcuffs or a shackling device, the critical claims of abuse by Avery’s ex-girlfriend Jodi Stachowski, and the sweat found under the hood of Teresa Halbach’s car.

The Novelty Handcuffs
Strang said they were pink, fluffy novelty handcuffs that did not have Halbach’s DNA on them. There is no suggestion that there were ever even used and they had nothing to do with anything in the trial. Strang went on to say there is nothing to support the lurid story the Manitowoc County deputies teased out of Brendan Dassey.

Jodi Stachowski
Strang also commented on Stachowski’s recounting of her own story. Avery’s and Stachowski’s prison sentences overlapped from before Halloween, when the murder took place, to the 16 months between Avery’s arrest and the end of the trial. This means all the conversations were recorded. As Strang said, “there’s not one word of him [Avery] telling her [Stachowski] the kinds of things she’s now claiming he told her.”

The Sweat Under The Hood of the Car
“There was no sweat, there was DNA under the hood,” Strang said. Steven Avery’s DNA was found in a minute quantity, but the DNA was not tested as blood or non-blood.

When the radio hosts praised Strang for the persuasion of his rebuttals, he humbly reiterated, “I’m just telling you what the evidence was at trial.”