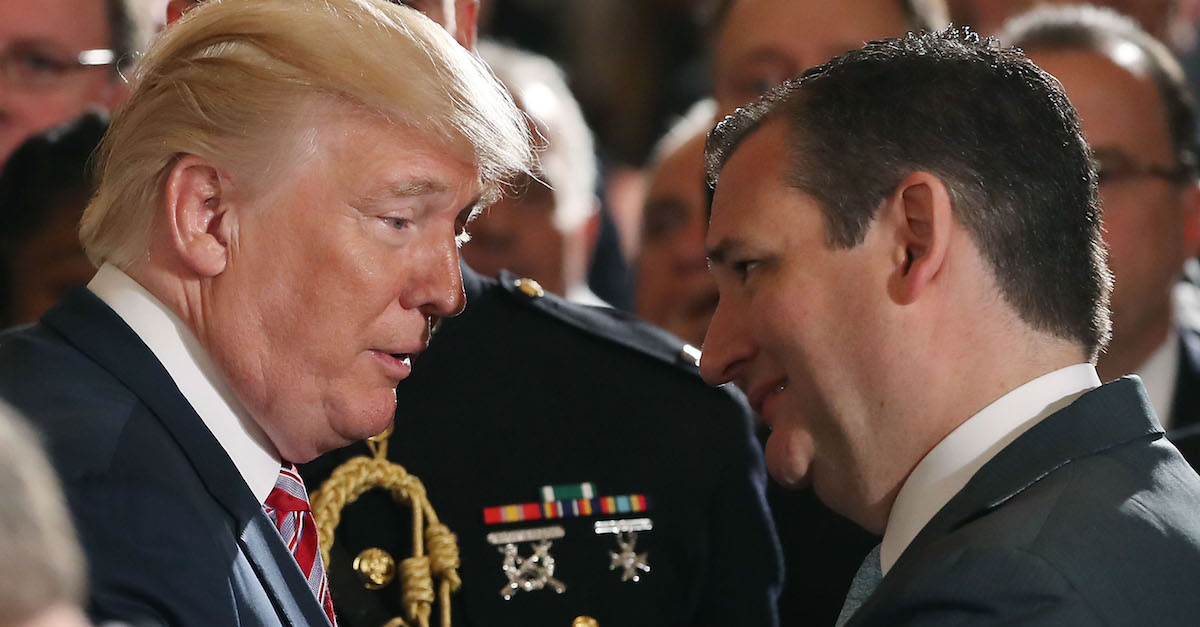 President Donald Trump pardoned conservative author, commentator and convicted felon Dinesh D’Souza on Thursday, sparking numerous thoughts across the country as to the potential motivations for doing so. Well, despite Trump saying that no one told him to pardon D’Souza (“Nobody asked me to do it” were the exact words), Sen. Ted Cruz (R-Texas) is taking at least some credit.

The Texas Tribune reported Friday that Cruz took it upon himself to go to bat for D’Souza.

“He had just pardoned Scooter Libby, who I think Scooter likewise had faced an unfair prosecution,” Cruz said. “I think that pardon was the right thing to do, and so in the car ride, I said, ‘You know, Mr. President, another pardon very much along the same lines of Scooter Libby would be Dinesh D’Souza, who I think was unfairly politically targeted.’ And the president agreed.”

The Texas Tribune noted that this is at odds with Trump’s claim that no one asked him to pardon D’Souza and that the Washington Post reported Cruz has lobbied for the pardon.

As Law&Crime mentioned Thursday, Cruz has been, we’ll say, skeptical that the criminal prosecution of D’Souza for a campaign finance violations was not politically motivated.

Cruz said in 2014 that the left would be outraged if the shoe was on the other foot.

“Dinesh D’Souza, who did a very big movie criticizing the president, is now being prosecuted by this Administration,” he said. “Can you image the reaction if the Bush administration had went, gone and prosecuted Michael Moore and Alec Baldwin and Sean Penn?”

Cruz later responded to the pardon by saying it made Thursday a “terrific day for Justice.”

A terrific day for Justice. @realDonaldTrump stood strong and did the right thing, and Heidi and I are celebrating with you and Dinesh. https://t.co/2RRbLaVu52

Law&Crime has reached out to Cruz for further comment.

It is worth mentioning that the road to a potential pardon could be as easy as calling Trump up on the phone and asking for it. One example would be Sylvester Stallone dialing Trump and asking for a Jack Johnson pardon, which Trump then granted one month later.

It’s also worth mentioning that, right or wrong, regardless of what Trump says or does with these pardons, ascribing sinister messaging to his decisions has and will continue to occur. Trump associates, including his longtime personal attorney Michael Cohen, former national security advisor Michael Flynn and former Trump campaign chairman Paul Manafort, are all currently facing serious legal troubles.

The crimes Trump associates are being probed for just so happen to mirror some of the crimes Trump is either absolving people of or reportedly considering pardons for.