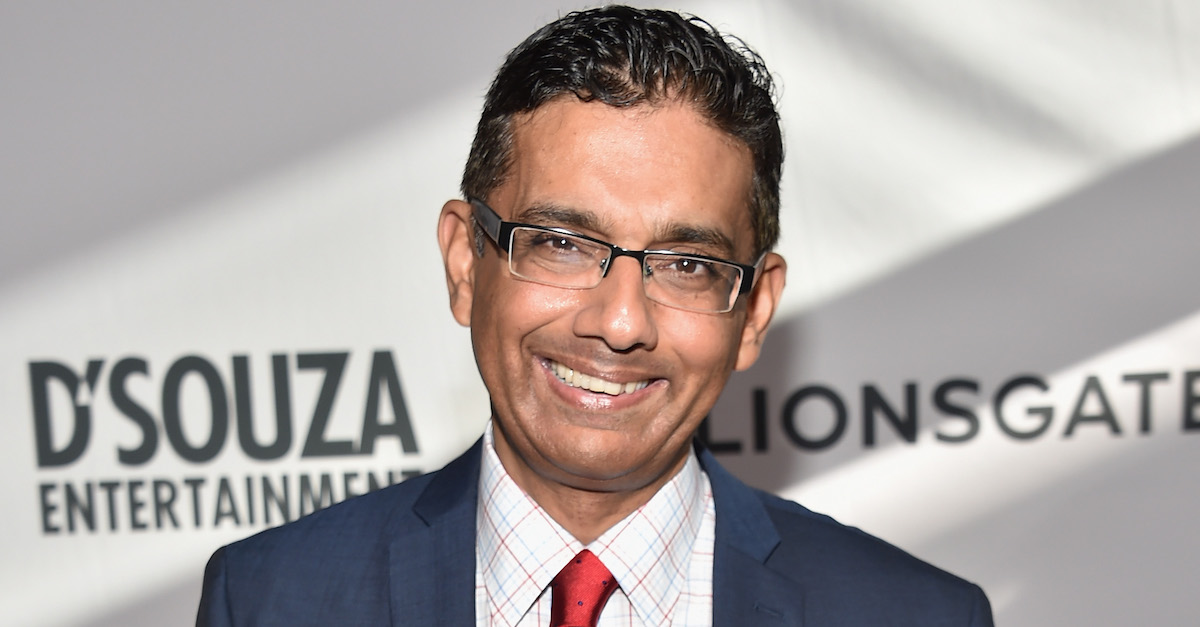 President Donald Trump announced Thursday that he is using his pardon power yet again, this time for conservative author and activist Dinesh D’Souza, who pleaded guilty in 2014 to breaking federal campaign laws by contributing sums of money through proxy donors. D’Souza reacted to the news by retweeting Trump’s tweet saying his was treated “very unfairly” and by advertising his new movie. Then he said thanks.

We would be remiss not to recall on an event such as this that D’Souza’s ex-wife of more than 20 years, Dixie Brubaker, was about as mad as anyone back in the day and even wrote to the U.S. District Judge Richard M. Berman to say been there, done that, and throw the book at him, please.

“I know Dinesh better than anyone and can attest to his flawed character and lack of truthfulness,” @DineshDSouza's ex-wife Dixie D'Souza, in a letter for his sentencing. pic.twitter.com/EgtFmu7Qwp

“I write in response to the sentencing memorandum and attachments submitted by my former husband, Dinesh D’Souza., in support of his upcoming sentencing hearing,” she wrote. “I was married to Dinesh D’Souza for more than 20 years and together with him for over 26 years.”

“I know Dinesh better than anyone and can attest to his flawed character and lack of truthfulness,” she continued. “Please accept this letter as my effort to correct the record Dinesh created by his false and misleading submissions to the Court regarding me, the extent and nature of his criminal conduct, and my relationship with our daughter, Danielle D’Souza.”

“I trust the court will carefully consider my letter and impose a fair, appropriate and just sentence,” she ended.

When Trump says D’Souza was being “unfairly” he probably probably means prosecutors went after D’Souza so aggressively because of politics (Barack Obama was the president and D’Souza had created and released an anti-Obama documentary before the 2012 election). D’Souza got five years probation, a felony conviction, and was made to admit that he “knew what he was doing was wrong and something the law forbids.”

Fox News’ Judge Andrew Napolitano said the reason Trump “correctly” said D’Souza was treated “unfairly” is that “historically this has not been treated as a criminal prosecution.”

“You over-contributed, the campaign kicks the money back, and you get fined. We don’t put you in jail. He was prosecuted aggressively for this,” he said. “Now, full disclosure, he’s been a friend of mine for 40 years. He is a brilliant scholar and analyst of the cultural woes of the United States, and all of his analyses, right in the face of Obama administration that prosecuted him. The president has done a marvelous act of justice. Not mercy, justice in this case. Most pardons are merciful. This is just.”

As NPR reported, the judge rejected the political prosecution claim by calling it “all hat, no cattle.” Former U.S. Attorney at the Southern District of New York, Preet Bharara also denied political motivation.

“As our office’s record reflects, we will investigate and prosecute violations of federal law, particularly those that undermine the integrity of the democratic electoral process, without regard to the defendant’s political persuasion or party affiliation,” he said. “That is what we did in this case and what we will continue to do.”

Texas Sen. Ted Cruz (R) memorably said “What about Michael Moore, Alec Baldwin and Sean Penn?” to say the left would be outraged if the shoe was on the other foot.

“Dinesh D’Souza, who did a very big movie criticizing the president, is now being prosecuted by this Administration,”  he said. “Can you image the reaction if the Bush administration had went, gone and prosecuted Michael Moore and Alec Baldwin and Sean Penn?”

Fast forward to 2018 and Cruz is saying today is a “terrific day for Justice.”

A terrific day for Justice. @realDonaldTrump stood strong and did the right thing, and Heidi and I are celebrating with you and Dinesh. https://t.co/2RRbLaVu52

D’Souza did argue he was being persecuted rather than prosecuted. D’Souza said as much as recently as 2017.

“There’s evidence in this case file, and there’s a lot more, that this was a political prosecution conducted by Bharara as a henchman for the Obama administration,” he told Fox News.

This is relevant because ex-wife also took issue with what she saw as D’Souza’s two-faced handling of his conviction. She asked if the real D’Souza was the “contrite” one who admitted he knew he did wrong or the one who goes on the “big screen” to document his martyrdom.

"Which is the real @DineshDSouza, the contrite one he states to the court or the irreverent, martyred one he portrays on the 'big screen' to the rest of America?"

President Trump has most recently pardoned legendary boxer Jack Johnson, Scooter Libby, and Joe Arpaio. Word on the street is that he is also considering pardons of Martha Stewart and former Illinois Gov. Rod Blagojevich.