Husband Told Cops that Chicago Prosecutor Kim Foxx Became ‘Physically Aggressive’ and Slapped Him over ‘Something That Was Posted on Facebook’: Police Report 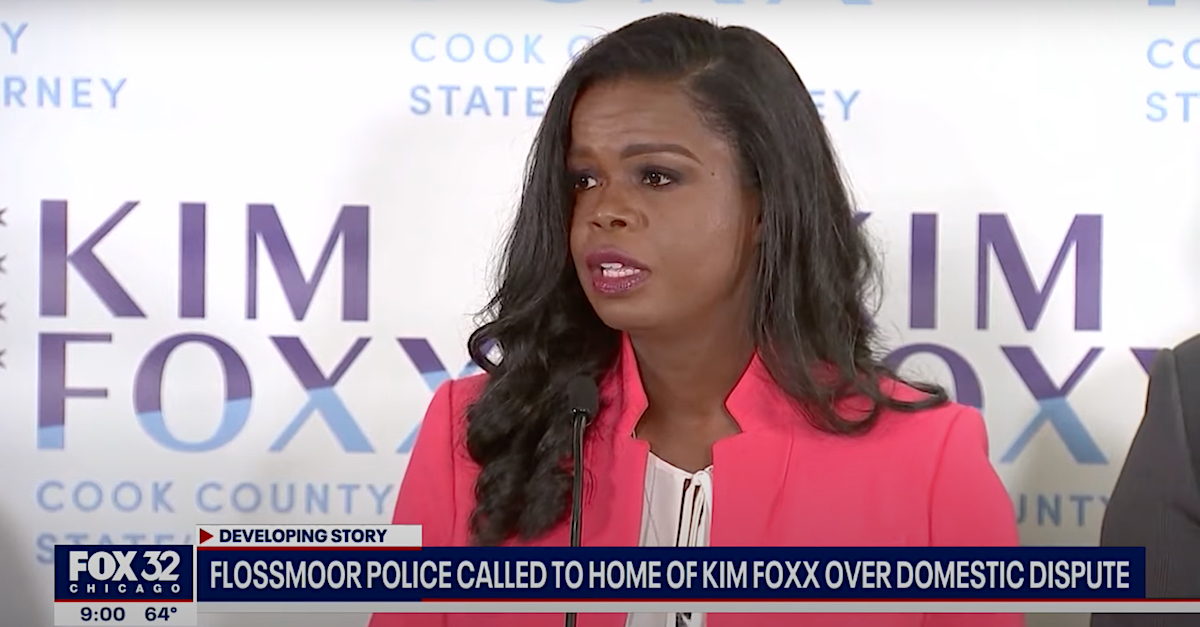 Cook County, Illinois State’s Attorney Kim Foxx (D) was the subject of a domestic disturbance call by her husband, according to police documents and multiple news reports.

According to police paperwork prepared by the Flossmoor Police Department, the husband accused the top prosecutor overseeing greater Chicago of being “physically aggressive” and that “he just wanted it to stop.”  However, the police wrote they found no physical evidence to corroborate the husband’s claims that the prosecutor struck him on the “left cheek.”

No arrests were made. 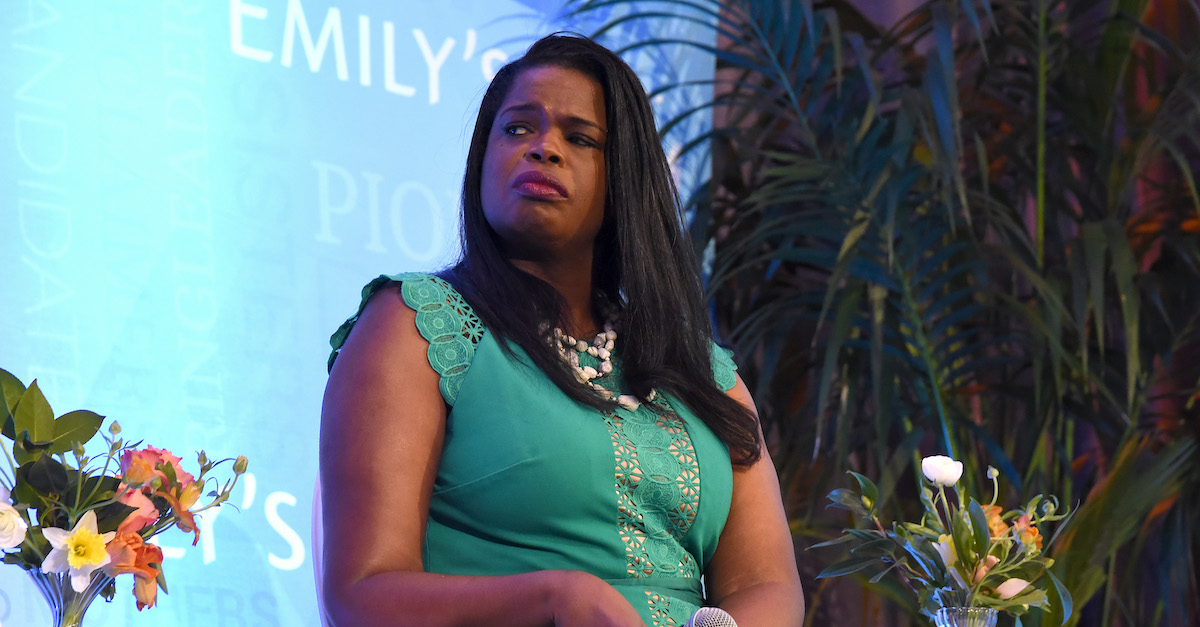 A copy of the police report published on the website CWBChicago says officers were dispatched to the Foxx family’s Flossmoor, Illinois home on Saturday, June 4 at 10:09 p.m.  The police report was also obtained by and/or reported by the Chicago Tribune, the Chicago Sun-Times, the New York Post, FOX News, and Chicago television stations WMAQ, WGN, WLS, WFLD, and WBBM, among other news organizations.

Husband Kelley Foxx called 911 to “report a domestic with his wife,” the police document indicates. The responding officers were told that there were not any injuries “yet” as they traveled to the Foxx home. 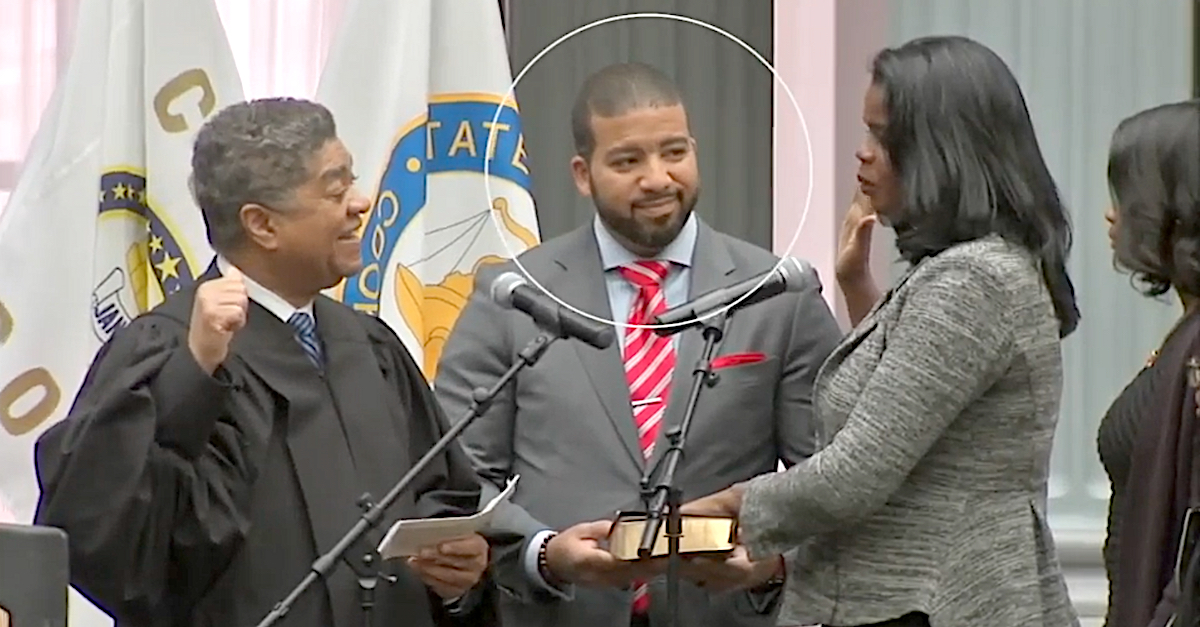 Kelley Foxx (circled in center frame) and Kim Foxx (right) were seen together in video taken at a swearing-in ceremony. (Image via a screengrab from WLS-TV file footage.)

Here’s how the events unfolded, according to the verbatim of the police report.  The document was penned by one Officer Cagle:

Kelley and Kimberly were standing on the front step to the home upon our arrival. I exited my patrol vehicle and activated my body worn camera. Sergeant Tencza walked with Kimberly away from the home and stopped by a vehicle parked in the driveway. Kelley was still standing near the front door to the home talking with Officer Estrada. I walked over to Officer Estrada to hear the complainant’s explanation of what happened. Kelley explained that Kimberly got mad about something that was posted on Facebook that he did. Kimberly asked him to leave and he refused. Kimberly then became physical. He explained that Kimberly blocked him from leaving a bathroom. Kimberly grabbed his collar and threw down his video game controller. He tried to turn on the TV and Kimberly snatched the controller out of his hand and threw the controller.

Kimberly was standing close enough to hear Kelley. While he was explaining what happened, I could hear Kimberly say “All that is true.” Kelley went on to explain that she slapped him. I asked where he was slapped and he said, “left cheek,” as he raised his hand to motion to his left cheek. I used my flashlight to see his left cheek. I did not observe any indicators to support his claim of being struck. There was no redness or swelling visible on his face. I explained that I did not see any marks on him and he responded he just wants to be left alone. I asked Kelley if he felt safe in the house. Kelley stated that he wanted to make sure someone understands what is happening here. I asked him to explain what is happening here meant and he said she is being physically aggressive. He added that he just wanted it to stop.

Officers then sought to speak with Kim Foxx and the couple’s daughter.

Sergeant Tencza spoke to Kimberly, who told him that she and her husband had an argument and she wanted him to leave. Sergeant Tencza walked over to the area where I was standing and spoke with Kelley. He repeated he just wants it to stop. “She can’t come in my personal space and put her hands on me.” Officer Estrada went into the home to speak to their 19 year old daughter [name redacted] about what happened with the incident. [The daughter] stated she heard a disagreement but could not tell what was going on and did not see anything.

Kelley explained to me that he needed to go pickup his other daughter from her job at Culver’s. Kelley left and I spoke with Kimberly. Kimberly explained that she did put her hands on Kelley but it was only to help guide him out of the house. She never slapped him. I asked Kimberly if she felt safe in the home and she said “I mean he’s not crazy.” Both Kimberly and Kelley stated they have been together for over 20 years and things have never been physical. Kimberly expressed that she felt Kelley called the police only to hurt her. I did not see any evidence to support an arrest in this incident. Neither Kimberly nor Kelley chose to leave the home for the evening. I provided Kimberly and Kelley with separate Domestic Violence Information sheets. This is the first time the Flossmoor Police have responded to a domestic call involving Kimberly and Kelley Fox [sic].

The report says that Richard Peck, “an investigator from Kimberly Foxx’s executive protection unit,” went to the police department and provided his contact information should the local constabulary wish to investigate further. The report further says that Officer Estrada, Officer Carden, Sergeant Tencza, and the author of the document (Officer Cagle) were all “wearing body worn cameras.” 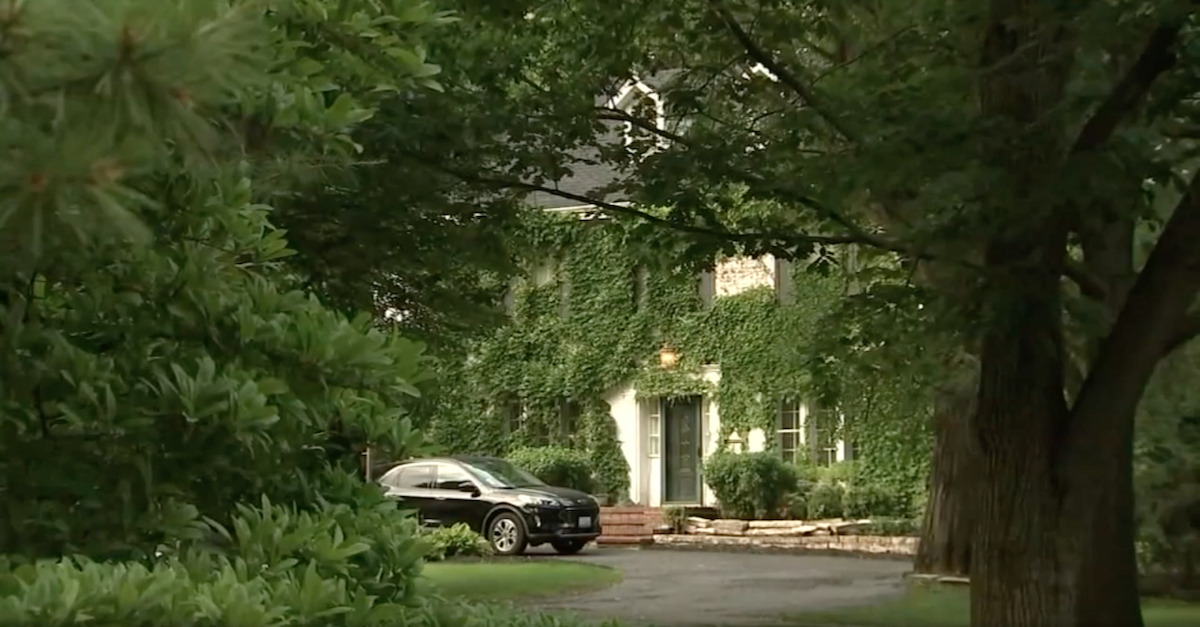 Police responded to the Foxx home in Flossmoor, Illinois, on the evening of Sat., June 4. (Image via WLS-TV screengrab.)

Chicago CBS affiliate WBBM said reporter Jermont Terry had “been digging all week” to figure out what really happened during the incident, but Terry reportedly encountered significant roadblocks in his quest for information.  The WBBM report says Flossmoor’s police chief failed to quickly respond to open records requests for the 911 call, the body camera footage, and the police report.  Eventually, the department released the paper report cited above but refused to release the body camera footage due to a purported need for “privacy” for the parties involved, WBBM indicated.

“This is a personal family matter, and we ask that you provide our family with respect and privacy,” both Kelley and Kim Foxx said in a joint statement to several of the aforementioned Chicago–area newsrooms.

WBBM said the State’s Attorney’s Office released a similarly worded missive:  “This is a personal family matter.  Please provide State’s Attorney Foxx and her family with respect and privacy.”

The website CWBChicago said that it learned “[a]fter business hours on Friday” that James P. Roache, the head of the State’s Attorney’s Office’s Bureau of Investigations, had “abruptly resigned.”  The website did not explain whether — or if — the resignation had anything to do with the domestic call.  Roache is not named in the Flossmoor police report as playing any role whatsoever in the case.

Under Illinois law (750 Ill. Comp. Stat. 60/303 to be precise), written police reports are mandatory when officers are called to investigate possible domestic disturbances.  Here is the statute:

(b) Every police report completed pursuant to this Section shall be recorded and compiled as a domestic crime within the meaning of Section 5.1 of the Criminal Identification Act.

Another section of Illinois law gives officers significant leeway when investigating domestic allegations.  Arrests are only required “where appropriate” under section 304 of the aforementioned statute.  Police departments are also required to promulgate written policies on how to handle domestic calls and to train officers on a specific schedule as to how to handle such matters under section 301.1 of the statute.

A spokesperson with Foxx’s office told the Chicago Sun-Times that if the police were to forward the domestic disturbance report to State’s Attorney’s Office led by Foxx, then “any conflicts would be referred to the Chief Ethics Officer who would make a recommendation based on the Rules of Professional Conduct” as to how the matter would unfold.