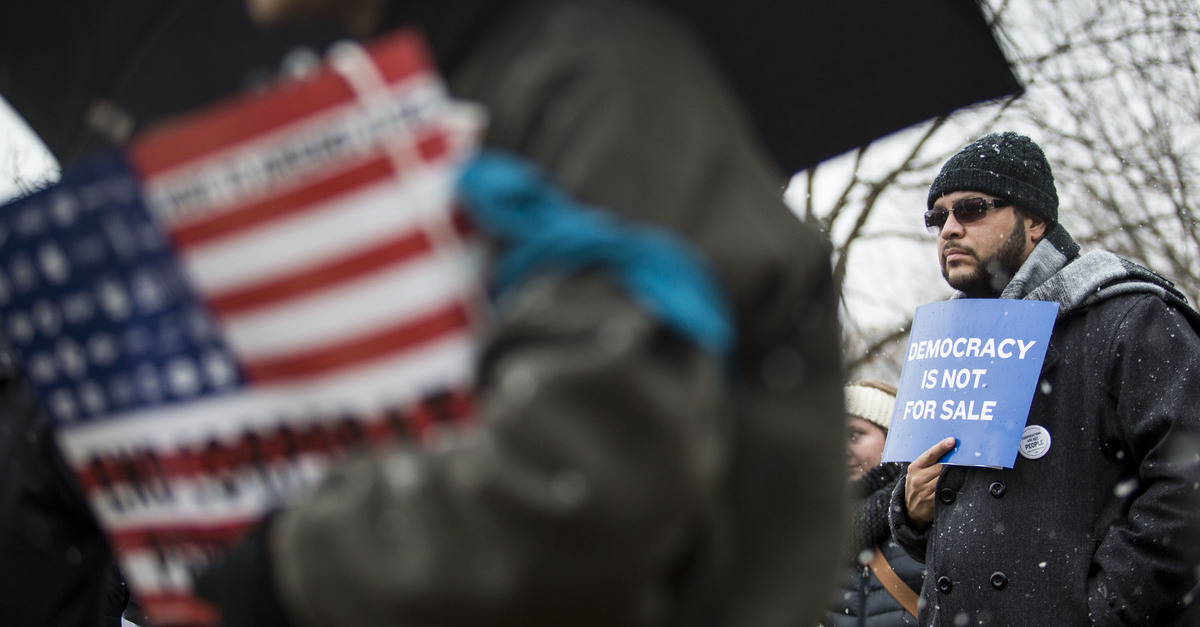 It’s been nearly 10 years since the Supreme Court unleashed a torrent of third-party spending on the American political system with the controversial Citizens United decision. And, now, as that anniversary nears, one nonprofit says it’s time for a constitutional amendment to reverse that ruling and kill the flood of corporate cash.

In 2010, the nation’s high court handed down Citizens United v. F.E.C., a 5-4 decision that eviscerated most of the Bipartisan Campaign Reform Act of 2002–a watershed series of campaign finance reforms commonly referred to as McCain-Feingold at the time.

Citing the First Amendment, the Supreme Court’s conservative majority held that: (1) the government cannot restrict the speech of state-created entities like corporations and non-profits or state-sanctioned entities like unions; (2) that spending money is a form of protected speech that cannot be restricted wholesale; and therefore (3) the government cannot seriously bar political spending by third-party organizations.

In his majority opinion, then-Supreme Court Justice Anthony Kennedy wrote: “If the First Amendment has any force, it prohibits Congress from fining or jailing citizens, or associations of citizens, for simply engaging in political speech.” Kennedy went on to argue that under the American system, the government is prohibited from regulating the “marketplace of ideas” or “rationing” speech and said it wasn’t the government’s business to determine whether legislators votes were being purchased via campaign contributions—saying: “There is no such thing as too much speech.“

The decision did, however, leave intact contribution limits to political candidates and prohibitions on campaign’s explicitly coordinating with such outside expenditure groups. But, reformers cautioned, the damage was done by allowing the tide of spending to flourish.

And, in the decade since, spending has ramped up apace. Nearly two billions dollars worth of outside corporate cash has found its way into the body politic. After the court revoked the heart of McCain-Feinfold, nearly half of that total spending has come in the form of undisclosed and untraceable “dark money.”

Various political groups have registered their discontent with the post-Citizens United landscape. American Promise is a nonprofit dedicated to overturning that Supreme Court decision by way of passing a 28th Amendment to the U.S. Constitution.

“The 28th Amendment would allow Congress and the states to set reasonable limits on the raising and spending of money by candidates and others to influence elections and ballot measures,” American Promise Managing Director Leah Field told Law&Crime. “An amendment creates the constitutional basis necessary to create legislation limiting the influence of big money in elections, and is a more permanent solution than can be offered by legislation alone. Like most amendments, the 28th Amendment creates the fundamental structure to enable the people and their representatives to enact legislation to limit dark money and unlimited election spending from distorting elections.”

Field went on to explain how the proposed change would affect candidates for public office:

Once an amendment to limit money in politics is ratified, congresspeople will no longer need to spend the majority of their time raising money. In the current system of unlimited election spending, fundraising becomes an ever-escalating arms race. With election spending limited, elected officials will be released from the “handcuffs” of big money, will no longer have to spend up to 70% of their time fundraising, and will be beholden to their constituents, not big money.

And the organization says they have been busy organizing allies to make those changes for quite some time.

“American Promise is working on a 10-year strategy to pass the Amendment by 2026,” Field noted. “Four years into our strategy, we have hundreds of thousands of supporters in all 50 states, more than 200 Amendment cosponsors in the House, more than 250 signers of the candidate pledge including more than a dozen 2020 presidential candidates, more than 800 cities and towns that have passed local resolutions, and 20 states (more than half the 38 needed to ratify) that have formally called on Congress to pass an amendment.”

Harvard Business School faculty member Malcolm Salter recently teamed up with the group as part of a campaign to commemorate the 10th anniversary of Citizens United with a renewed focus on activism. He provided his thoughts on the current state of the intertwining American system of business and government.

“Only campaign finance reform can contain the cancer that is attacking the body of democratic capitalism in the country today,” Salter said in comments to Law&Crime. “That cancer is called crony capitalism.”

“Crony capitalism is a very particular kind of money-making,” the Harvard Business Professor continued. “Crony capitalism works with informal collusion among industries, their regulators and Congress. It results in policies and investments that serve private corporate interests at the expense of the public.’

“American consumers pay between 64 and about 94 percent above the world prices for sugar–and the tax-paying public gives over $3 billion a year in subsidies to the sugar industry,” Salter said. “Why? The answer is, at least partly, because in 2018, the sugar industry spent over $7 million in campaign contribution to congressional candidates and over $12 million in lobbying. There are signs of such cronyism in dozens of other U.S. industries.”

Salter then leveled a broader critique:

The Cato Institute estimates that the federal government spends at least $100 billion annually just on tax breaks and subsidies. Such deals rely on targeted campaign contributions and massive lobbying operations. Seventy to 80 percent of funding for congressional campaigns comes from large contributors–mainly wealthy individuals and corporations. And, since 2000, businesses and trade groups have spent 60 times more on lobbying than labor. This is truly a picture of an American oligarchy at work.

“Many business leaders now believe that cronyism must be arrested,” Salter continued.

The long-serving business professor, who has been at Harvard since 1967, doesn’t cut the typical profile of a liberal crusader–and made an appeal across the aisle.

“No significant regulation of crony capitalism will occur without a major change in our approach to campaign financing–period,” Salter said. “This is why I believe conservatives and progressive should join together in reform. A constitutional amendment is difficult for sure. But there may not be any other viable route.”