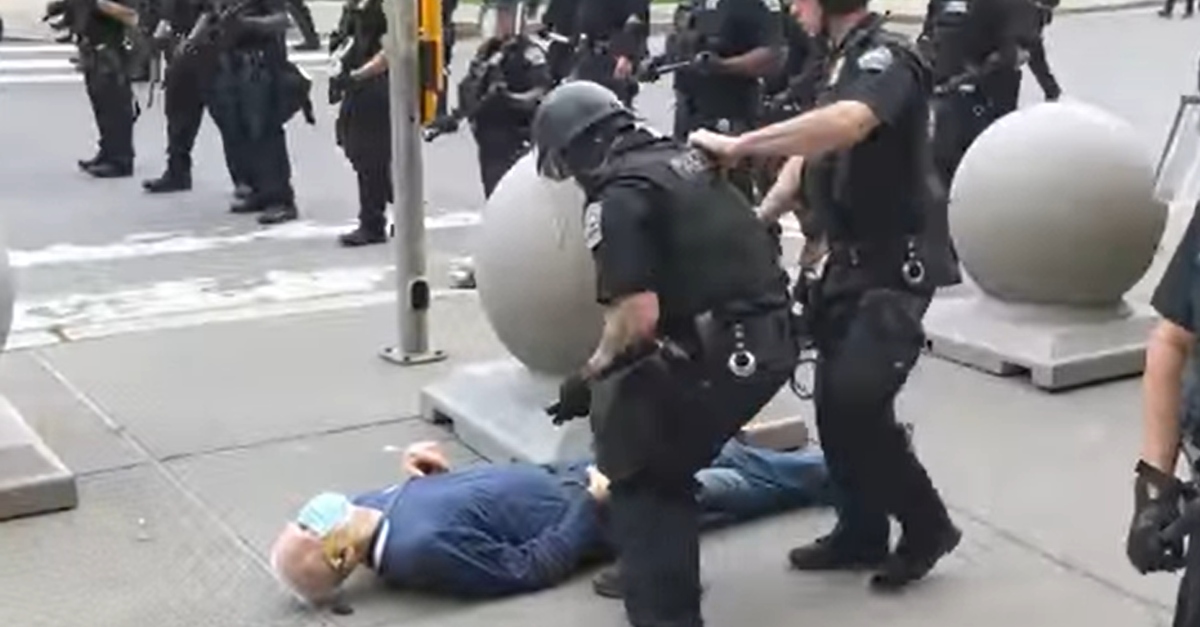 Two members of the Buffalo Police Department (BPD) were arrested and charged with second-degree assault for allegedly pushing a 75-year-old protester to the ground during demonstrations against police brutality sparked by the murder of George Floyd.

Officers Aaron Torgalski and Robert McCabe were arraigned via videoconference and released on their own recognizance Saturday after both entering not guilty pleas.

Video obtained by local NPR affiliate WBFO showed a large group of police from the department’s emergency response team clearing demonstrators from a square in front of City Hall when a protestor named Martin Gugino approached officers. In the recording, Gugino has a very brief verbal exchange one of the officers before he is pushed by what appears to be two of the officers. Gugino fell backwards, landing hard on the concrete; blood began pooling around the back of his head almost immediately as he laid motionless.

In its initial statement released Thursday, Buffalo Police said that Gugino “tripped and fell,” but the department retracted that statement hours later and announced that officers Torgalski and McCabe had been suspended without pay.

“Once the department became aware of additional video from the scene, they immediately opened an investigation,” a spokesperson for the city and police department, Mike DeGeorge told ABC News.

Upset with the suspensions, the remaining 57 members of the emergency response team resigned from this particular detail in protest — but not from the department generally.

“Our position is these officers were simply following orders from Deputy Police Commissioner Joseph Gramaglia to clear the square,” Buffalo Police Benevolent Association President John Evans said. “It doesn’t specify clear the square of men, 50 and under or 15 to 40. They were simply doing their job. I don’t know how much contact was made. He did slip in my estimation. He fell backwards.”

Gugino’s attorney Kelly V. Zarcone issued a statement Friday evening saying his client is “a longtime peaceful protester, human rights advocate, and overall fan of the US Constitution,” adding that he is in “serious but stable condition” and remains “alert and oriented.”

Erie County District Attorney John Flynn on Saturday said the officers were charged because they committed a crime. He also illustrated how he believed the events should have unfolded for Gugino.

“If he was violating a curfew, if he was being disorderly, you turn him around, handcuff him, and take him away arrested. It’s as simple as that,” Flynn said (according to NBC News). “You don’t take a baton and shove it; along with the officer next to him using his right hand to shove him and knock him down, and crack his head, his skull on the concrete.”

“If I have any credibility as a public official, I need to be consistent. These officers violated the law. The facts are there. The charges are there. And that’s what they’re faced with,” Flynn said according to reporter Jeannie McBride of Spectrum News, a regional cable channel.

Erie Co. DA John Flynn on 2 #Buffalo Police Officers charged with assault:
“If I have any credibility as a public official, I need to be consistent. These officers violated the law. The facts are there. The charges are there. And that’s what they’re faced with.”@SPECNewsBuffalo https://t.co/nnJF2wctYs

Flynn also said that because of Gugino’s age, the assault charges against the officers are felonies.

UPDATE: In another sign of solidarity, dozens of BCP officers greeted Torgalski and McCabe with cheers and applause as they exited the courthouse Saturday afternoon.

Buffalo police officers applauded by their colleagues as they leave the courthouse pic.twitter.com/t9DGC07ijZ

Editor’s note:  this piece has been updated to correct a spelling error.