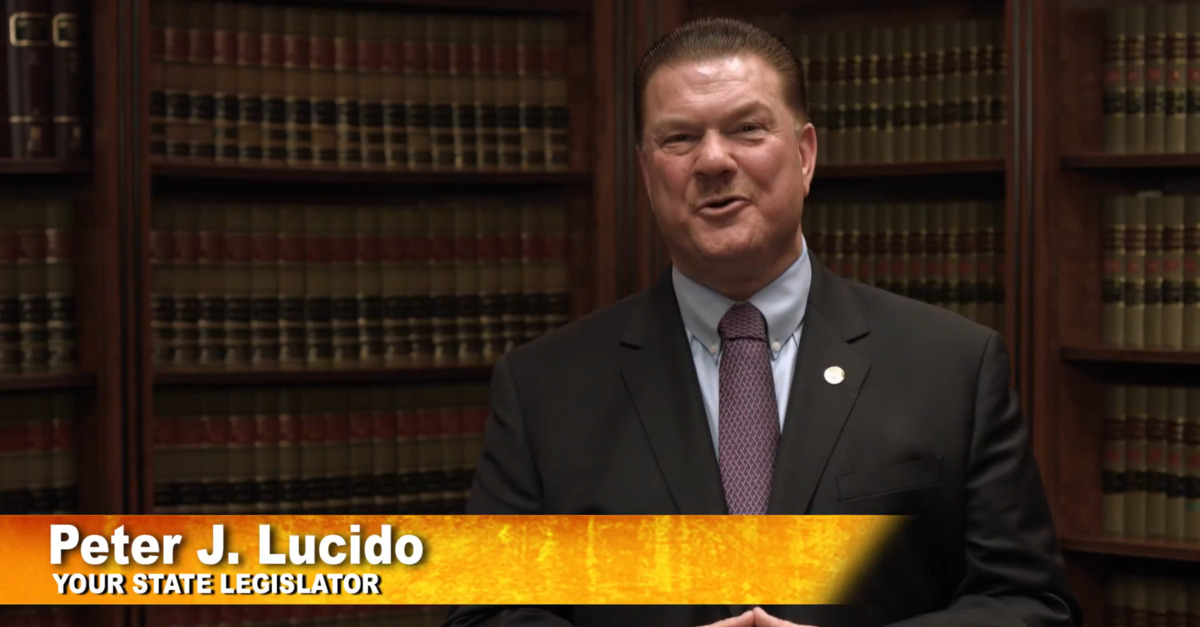 A Republican State Senator in Michigan caused an uproar leading to a sexual harassment investigation after telling a female reporter that a group of schoolboys “could have a lot of fun with you.”

State Sen. Peter J. Lucido made the comments to Michigan Advance reporter Allison Donahue on Tuesday. Donahue was waiting outside the Michigan Senate Chamber in order to quiz Lucido about his alleged involvement and membership in a Facebook group opposed to Democratic Gov. Gretchen Whitmer, in which members had reportedly posted violent comments and memes directed at Muslims and Democrats–including Detroit Rep. Rashida Tlaib (D-Mich.).

Lucido dodged the question–explaining to the reporter that he first wanted to honor students of his alma mater who had also gathered outside the chamber the day.

Donahue described the exchange that occurred immediately after:

As I turned to walk away, he asked, “You’ve heard of De La Salle, right?”

I told him I hadn’t.

The teenagers burst into an Old Boys’ Network-type of laughter, and I walked away knowing that I had been the punchline of their “locker room” talk.

“Except it wasn’t the locker room; it was the Senate chamber,” Donahue’s report continues. “And this isn’t high school. It’s my career. I’m 22 years old and one of the youngest current Capitol reporters. The senator’s insinuating comments about the ‘fun’ I might have with a group of teenage boys was belittling and it came from a place of power.”

Leaders of both parties in the Wolverine State denounced Lucido’s scandalous comments.

“Sexual harassment has no place in the Michigan Senate,” Republican Senate Majority Leader Mike Shirkey and Democratic Senate Minority Leader Jim Ananich said in a joint open letter addressed to the leader of the Senate Office Building. “We take these allegations very seriously and trust that you will take appropriate action to resolve this matter.”

“Senator Lucido’s comments do not represent De La Salle nor the values and conduct we instill in our young men,” the school said via Twitter. “We are very sorry the reporter was put in this position and we have met with the boys who were on the tour to discuss the improper nature of this situation.”

According to the Detroit Free Press, Lucido was initially defiant–saying he had nothing to apologize for—implausibly insisting that he was “not talking about anything sexual,” but rather was “geeked up about the boys coming there.”

“I was there to have some fun,” the Republican told the outlet. “It was blown out of proportion.”

After the reprimand from his own party and old school, however, Lucido changed his tune.

“I apologize for the misunderstanding yesterday and for offending Allison Donahue,” Lucido later tweeted after that bipartisan reprimand and resulting media onslaught.

But then, on Wednesday afternoon, Lucido had yet another story to tell.

This time he claims to have been misquoted.

“I said, ‘We’re going on the (Senate) floor to have some fun; you’re welcome to join us,’” the Free Press noted.

“I want to bring them on the floor; you’re welcome to come and join us,” Lucido said he told a local radio host—who he also now claims to have been misquoted by. “You’re welcome to have some fun with us.”

The Michigan Advance is standing by Donahue’s account. The outlet’s Editor-in-Chief Susan Demas said Lucido’s ever-shifting responses are evidence the GOPer is “lying” and has “low moral character.”

As for the sexual harassment investigation? The results may never see the light of day.

“The Business Office is only subjected to the release of financial documents,” Michigan Senate spokesperson Amber McCann told the Free Press. “So they will maintain that policy. That’s all they have to release. It’s not a precedent in the Senate to release personnel files.”

Lucido had previously expressed his interest in a gubernatorial bid—directing ire against Whitmer and citing her alleged vulnerability against a challenge from him. That professed ambition now looks a bit out of reach.