George Conway: Former Trump Lawyer Told Me the President Would ‘Talk Himself into Jail’ if Allowed to Speak to a Prosecutor 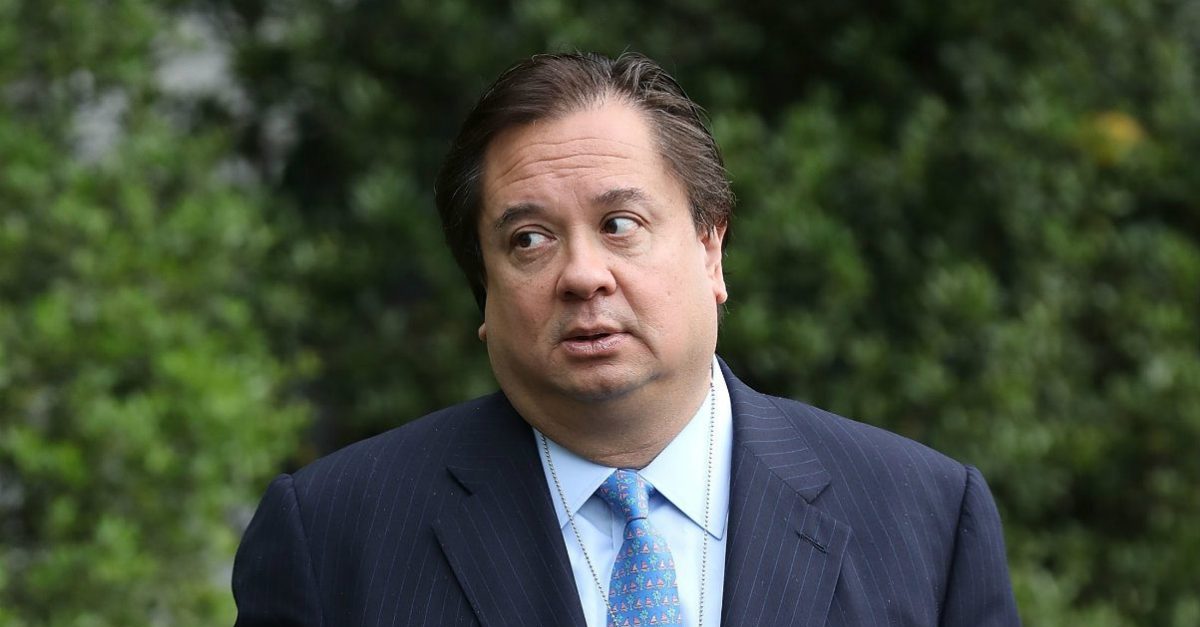 George Conway, a noted Trump nemesis and the attorney husband of White House counselor Kellyanne Conway, penned a brutal op-ed in The Atlantic on Thursday arguing that President Donald Trump is patently incapable of properly executing the duties of the office. The lengthy piece included an anecdote involving a lawyer who has represented Trump in business disputes; that lawyer, per Conway, essentially said that if the president was allowed to talk to a prosecutor Trump would “talk himself into jail.”

Clocking in at more than 11,000 words, Conway’s thoroughly piece pulls from several books on Trump’s presidency and concludes that the president is unfit for office.

“It would take entire books to catalog all of Trump’s behavioral abnormalities and try to explain them—some of which have already been written. But when you line up what the Framers expected of a president with all that we know about Donald Trump his unfitness becomes obvious,” Conway wrote.

Conway recounted numerous examples and anecdotes to paint a portrait of Trump as a man so detached from reality that he lacks the ability to act in a way that doesn’t add to his self-imposed legacy of grandeur, even if this has objectively negative consequences.

“The president isn’t simply volatile and erratic, however—he’s also incapable of consistently telling the truth. Those who work closely with him, and who aren’t in denial, must deal with Trump’s lying about serious matters virtually every day,” Conway wrote before providing a specific example.

“Trump simply can’t dial down the lying, or turn it off—even, his own attorneys suggest, when false statements may be punished as crimes. A lawyer who has represented him in business disputes once told me that Trump couldn’t sensibly be allowed to speak with Special Counsel Robert Mueller, because Trump would ‘lie his ass off’—in effect, that Trump simply wasn’t capable of telling the truth, about anything, and that if he ever spoke to a prosecutor, he’d talk himself into jail.”

According to Conway, the catalogue of instances exemplifying the President’s most narcissistic and sociopathic tendencies stands as a testament to how Trump views the office and why that disregards the Framers of the Constitution’s expectations of the nation’s chief executive.

“Indeed, Trump’s view of his presidential powers can only be described as profoundly narcissistic, and his narcissism has compelled him to disregard the Framers’ vision of his constitutional duties in every respect,” Conway continued, noting that Trump has “repeatedly used executive powers, threatened to use executive powers, or expressed the view that executive powers should be used to advance his personal interests and punish his political opponents.”

“That’s when Trump’s behavioral and psychological characteristics should—must—come into play. From the evidence, it appears that he simply can’t stop himself from putting his own interests above the nation’s. Any serious impeachment proceedings should consider not only the evidence and the substance of all impeachable offenses, but also the psychological factors that may be relevant to the motivations underlying those offenses,” Conway concluded. “But if Congress does its job and presents the evidence, those who are in denial won’t be able to ignore the problem any longer. Not only because of the evidence itself, but because Donald Trump will respond in pathological ways—and in doing so, he’ll prove the points against him in ways almost no one will be able to ignore.”