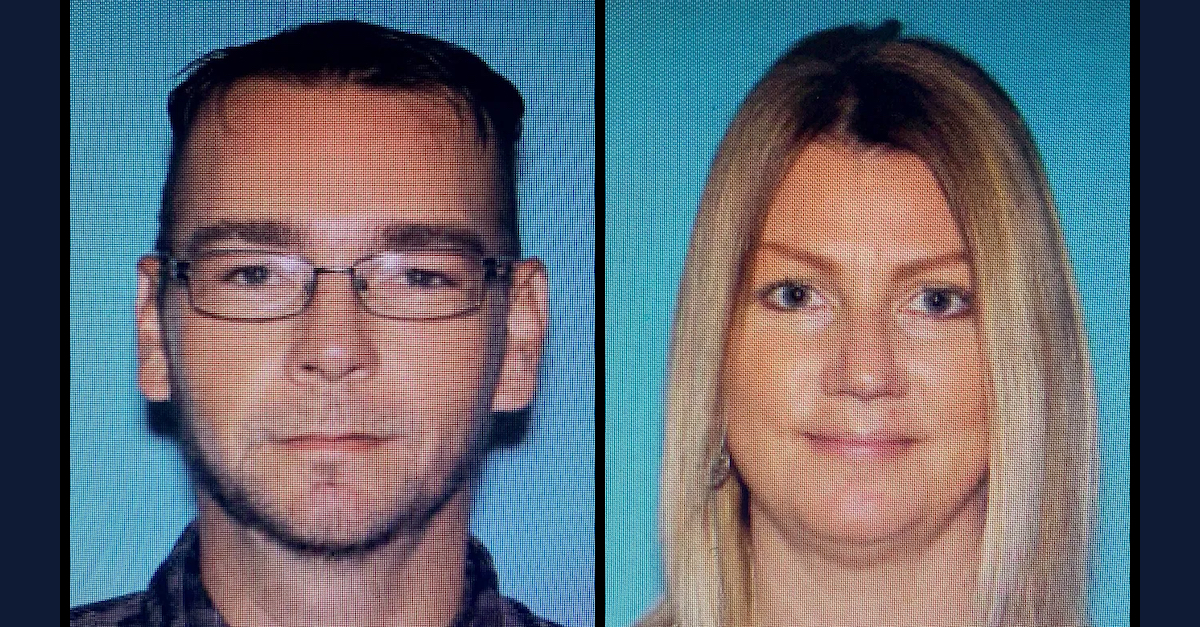 The Oakland County, Mich. Sheriff’s Office issued an alert for James and Jennifer Crumbley on Friday — the same day prosecutors charged the couple with four counts of involuntary manslaughter each.  Authorities believe the father and mother provided the 9mm Sig Sauer handgun that their son Ethan Crumbley, 15, allegedly used to kill four people at Oxford High School just days after the gun’s purchase.

“The Crumbleys are driving a black 2021 Kia Seltos SUV with the Michigan Plate DQG 5203,” deputies said at 3:55 Friday afternoon on Facebook. “Please call 911 immediately if you have information about their whereabouts.”

The U.S. Marshals Service said it “adopted” the search for the duo and that a “Fugitive Apprehension” team out of Detroit was on the case.

The US Marshals have adopted the case of the search for James and Jennifer Crumbley, the parents of the accused Oxford HS (Mich.) shooter. The USMS Detroit Fugitive Apprehension team is working in conjunction with the Oakland County Sheriff’s Office on the search.

Citing a law enforcement source, CNN reported Friday evening that the couple withdrew $4,000 from an ATM in Rochester Hills, Mich., and shut off their cell phones — thus preventing law enforcement from tracking them by pinging their mobile devices.

As the night wore on, U.S. Marshals indicated that a $10,000 reward had been authorized for information leading to the Crumbley parents.

Late into the night, several Detroit television stations, including NBC affiliate WDIV, began to report that police had located the Crumbley vehicle. ABC affiliate WXYZ said that the SUV turned up in the 1100 block of Bellvue.  The search focused in that area of the Motor City, about ten minutes east of Downtown, as Friday night spilled into Saturday, the local reports indicated; WXYZ said a “large police presence” was conglomerating around East Layfayette Street — a street which crosses Bellevue — between E. Lafayette St. and E. Grand Boulevard.

The car belonging to the Crumbleys believed to be found in Detroit. Right now, police searching the area for them. @clickondetroit @Local4News pic.twitter.com/HuSYsCqfkd

Officers are searching a wide area for the Crumbleys. @clickondetroit @Local4News pic.twitter.com/vRooQCbybG

The couple’s attorneys claimed earlier Friday that James and Jennifer fled town “for their own safety” after the shooting on Tuesday, Nov. 30, and and were making their way back to face the charges, both CNN and several local television stations reported throughout the day.

“On Thursday night we contacted the Oakland County prosecutor to discuss this matter and to advise her that James and Jennifer Crumbley would be turning themselves in to be arraigned,” attorneys Shannon Smith and Mariell Lehman said in a statement to several newsrooms. “Instead of communicating with us, the prosecutor held a press conference to announce charges. The Crumbleys left town on the night of the tragic shooting for their own safety. They are returning to the area to be arraigned. They are not fleeing from law enforcement despite recent comments in media reports.”

Two attorneys working with the parents of the Michigan school shooting suspect say the couple aren’t fleeing, but left town days ago “for their own safety” and will return for their arraignment https://t.co/86ihu51U5d

Stories about the couple’s whereabouts repeatedly changed as Friday progressed.  According to Lansing television station WLNS, Oakland County Sheriff Michael Bouchard confirmed that the couple’s attorneys sought to connect the suspects to law enforcement, but when detectives sought to arrest the couple after prosecutors filed the charges, the couple was nowhere to be found.

The sheriff’s office said later that an attorney for the couple could reach neither James nor Jennifer by phone or by text message, according to WLNS. Citing Oakland County Undersheriff Michael McCabe, CNN similarly said one of the attorneys representing the couple “had not actually talked with the parents.”

WLNS said that the parents were expected to turn themselves in at about 2:00 p.m. Friday. The couple was supposed to then face a judge for the first time at 4:00 p.m. The requisite courthouse — presumably Michigan’s 52nd District Court, Division 3, in Rochester Hills where the couple is charged — closed at 5:00 p.m. without the Crumbleys appearing, the Detroit News reported.

McCable also told the Detroit News that he didn’t even know the prosecutor chose to file charges until he heard about it from reporters — raising questions about the level of coordination (or lack thereof) between the county prosecutor and the county sheriff’s department in their handling of the high-profile case.  Some of the sparring between the law enforcement agencies played out on CNN throughout the night.

This story continues to develop.  It has been updated significantly since its initial publication.