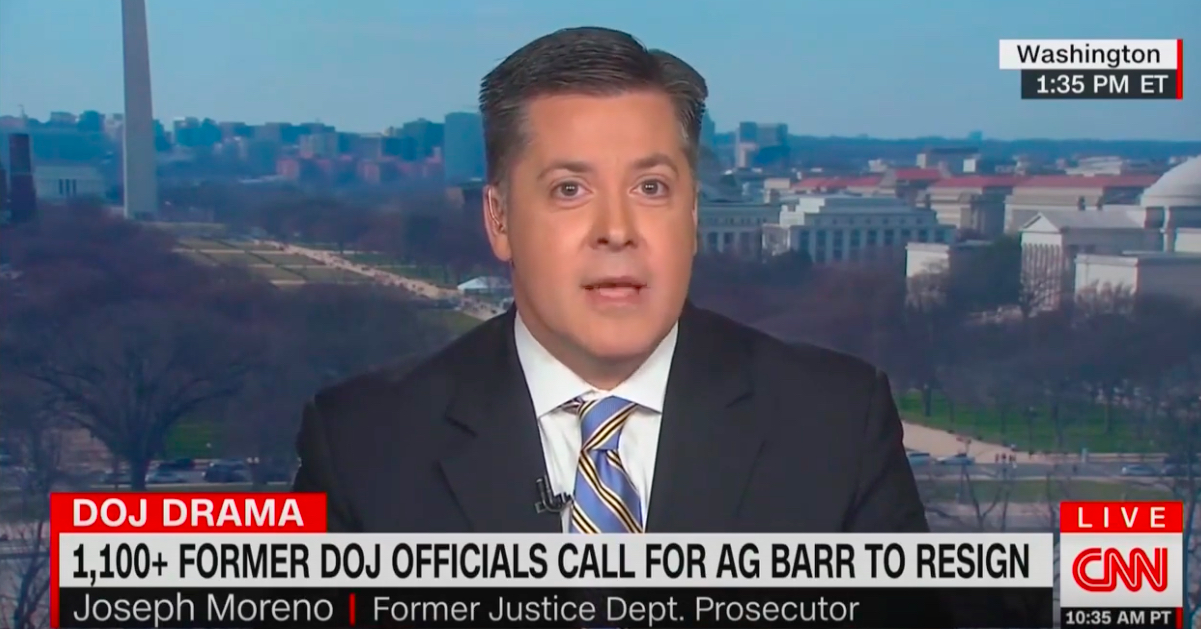 The Justice Department’s seemingly political decision to intervene on behalf of longtime Donald Trump friend and advisor Roger Stone was met with swift backlash by DOJ veterans, sparking a bipartisan coalition of over 2,000 former prosecutors to sign on to an open letter calling for Attorney General William Barr’s resignation. But one former federal prosecutor is saying that the situation isn’t as dire as some of his former colleagues claim.

Asked whether he agreed with the position of his one-time colleagues, former federal national security prosecutor Joseph Moreno said that while the situation is serious, it does not pose a critical threat to maintaining an impartial DOJ.

“I certainly reviewed [the letter] and I have a heck of a lot of respect for the 1,000 or so individuals that signed this letter – I’ve got a lot of former colleagues on there – and look, I understand what they’re saying [and] I completely respect their position,” Moreno said to CNN’s Bianna Golodryga on Monday.

Over 1,000 former prosecutors have signed a letter calling for AG Barr to resign. I respectfully disagree. Thank you to @cnn and @biannagolodryga for having me on today to discuss. pic.twitter.com/hW57PaxcCq

“I’m not quite there. I think that the attorney general has an extremely difficult position and I think that statements he made like the one last week to ABC News where he said, ‘Look, the tweets have to stop, you’re making it impossible to do my job,’ that’s important,” Moreno said.

Moreno has already said that the resignation of the prosecutors on the Stone case had “seriously shaken” the public’s confidence in the justice system, but called for the recent developments to be put in proper perspective.

“Now I get it. Some people might say that’s too little too late, but I think under the circumstances – and you have to look at the history here – the significant cases against people the president was close to did move forward,” he said, specifically citing special counsel Robert Mueller’s investigation into Russian interference in the 2016 election and Trump obstruction.

Moreno concluded by saying that the severity of the current situation is being exaggerated by those calling for Barr’s resignation or impeachment.

“While this change to the sentencing recommendation – for many people – may seem like ‘wait a minute, that’s a bridge too far,’ I think in the big scheme of things this issue is being blown out of proportion,” he said.