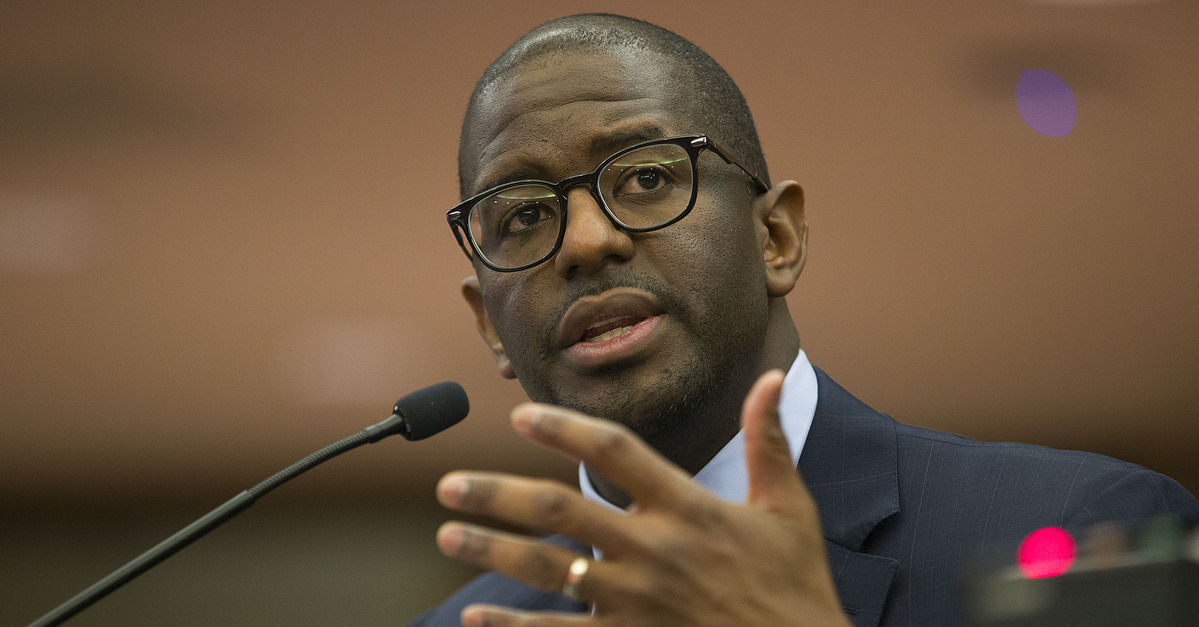 Florida’s losing Democratic Party 2018 gubernatorial candidate Andrew Gillum was involved in a so-called “crystal meth incident” during the wee hours of Friday morning, according to authorities in Miami Beach.

A police report alleges that Gillum was vomiting and “inebriated” while another man in a hotel room was overdosing on methamphetamine. Ultimately, authorities were called in order to save the man’s life.

Police say that a man named Aldo Meijas claims he gave another man named Travis Dyson his credit card information to rent a hotel room for the trio. Dyson apparently took drugs and eventually went into cardiac arrest—prompting a call for EMS. Police arrived later and attempted to speak with Gillum, but he was allegedly too far gone to be of help.

Gillum’s involvement in the situation is not being viewed as criminal—nor is the underlying incident being investigate as a criminal matter at present.

The news, however, is likely to send shockwaves through the Florida and national political establishment and press. Gillum lost a razor-thin election to Republican Governor Ron DeSantis in the Sunshine State during the 2018 wave midterm election.

That wave, of course, largely failed to materialize in Florida but Gillum was notably endorsed by both Sen. Bernie Sanders during the Democratic Primary—catapulting to victory as a progressive—then later, in the general election, by Sanders’s 2016 rival Hillary Clinton.

Gillum’s agonizingly close loss was largely attributed to his campaign tacking to the center following Clinton’s endorsement—but in defeat national Democrats anointed him a rising star nonetheless. That image and stature is now severely jeopardized.

Miami Beach Mayor Dan Gelber was apprised of the drug incident but has yet to release an official statement, according to Florida Politics.

In a statement, Gillum denied ever using meth.

Gillum statement: "I was in Miami last night for a wedding celebration when first responders were called to assist one of my friends. While I had too much to drink, I want to be clear that I have never used methamphetamines."

The police report reads, in full:

Officers then made contact with two other males who were inside of the hotel room: Aldo Mejias (complainant) and Andrew Gillum (involved other). Mr. Mejias stated the following to officers: Mr. Mejias provided his credit card information to Travis Dyson to rent a hotel room for the night; Mr. Mejias was to meet Mr. Dyson later in day. Travis Dyson rented the room at approximately 1600 hours on 03/12/2020. Mr. Mejias arrived at the hotel at approximately 2307 hours, where he discovered Travis Dyson and Andrew Gillum inside the room under the influence of an unknown substance. Per Mr. Mejias, Mr. Dyson opened the hotel room door and immediately walked over to the bed and collapsed in a prone position. Mr. Mejias observed Mr. Gillum inside of the bathroom vomiting. Mr. Mejias stated that he observed Mr. Dyson having difficulty breathing, prompting him to wake him up. Mr. Dyson then began vomiting on the bed and immediately collapsed again. Mr. Mejias began conducting chest compressions on Mr. Dyson and proceeded to contact police fire rescue.

Officers then attempted to speak to Mr. Gillum. Mr. Gillum was unable to communicate with officers due to his inebriated state.

MBFR (r1) responded a second time to the hotel reference a welfare check on Mr. Gillum. Fire rescue stated that he was in stable condition and his vitals were normal (mbfr incident #2020-4952).

Officer Pascual (2049) responded to Mt. Sinai to check on the welfare of Mr. Dyson. The registered nurse at Mount Sinai (Judith) stated that Mr. Dyson was conscious and in stable condition.

The three small baggies of suspected narcotics were impounded at the Miami Beach Police station property and evidence unit for destruction.

Mr. Gillum left the hotel room and returned to his residence without incident.

A copy of that report is available below: