Feds Charge Five Accused of Spying on Dissidents for China. One Target Was Tiananmen Square Protester Now Running for Congress. 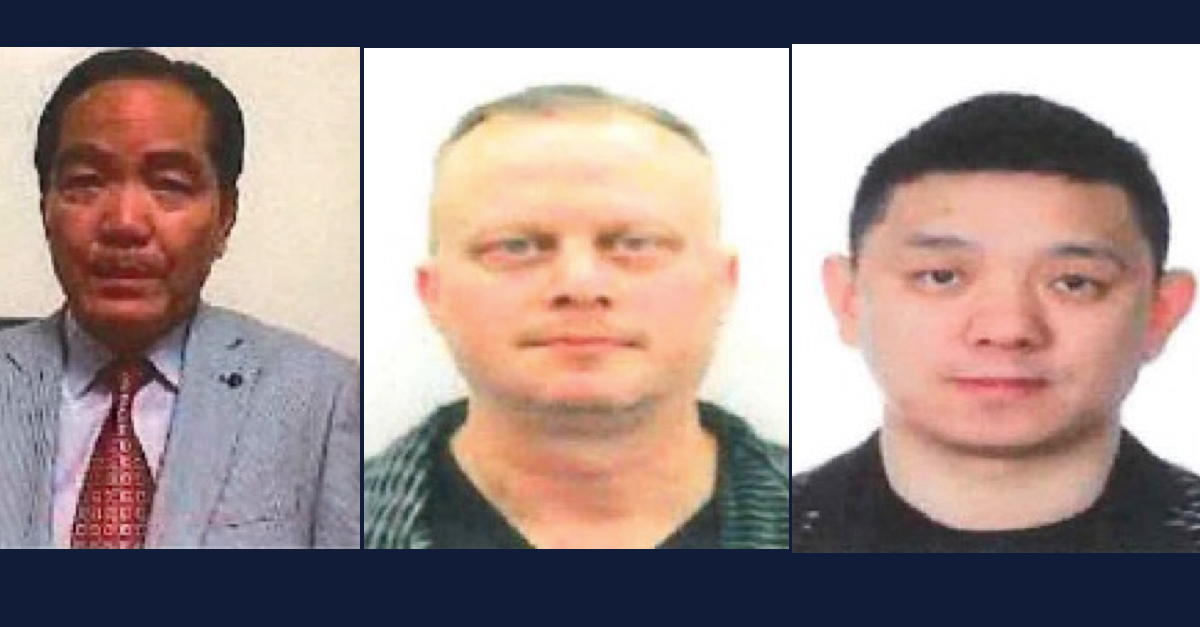 A congressional candidate in New York, an artist, and pro-democracy activists were all targets of a scheme by Chinese officials to silence critics of that country’s repressive regime.

Federal prosecutors unveiled three separate complaints against five defendants on Wednesday, alleging that they engaged in “various crimes related to efforts by the secret police of the People’s Republic of China (PRC) to stalk, harass and spy on Chinese nationals residing in Queens, New York, and elsewhere in the United States,” according to a press release.

According to prosecutors, all the defendants “allegedly perpetrated transnational repression schemes to target U.S. residents whose political views and actions are disfavored by the PRC government, such as advocating for democracy in the PRC.”

Wednesday’s complaints are meant to “serve notice” to foreign intelligence agencies that “efforts at suppression within our borders will not be tolerated,” said Assistant Director Alan E. Kohler Jr. of the FBI’s Counterintelligence Division at the press conference Wednesday.

FBI officials compared the charges to other recent arrests in transnational repression cases, including the indictment in January of four Belarusan government officials in connection with the plot to divert a Ryanair Flight in order to arrest dissident journalist Roman Protasevich. In July of 2021, the FBI announced kidnapping conspiracy charges against Iranian intelligence officials for an alleged plot to kidnap a U.S. journalist and human rights activist.

“Beat Him Until He Cannot Run for Election.”

Prosecutors say that Qiming Lin, 59, while working on behalf of the PRC’s Ministry of State Security (MSS), hired a private investigator to “disrupt the campaign of a Brooklyn resident currently running for U.S. Congress (the Victim), including by physically attacking the Victim.”

The target was a student leader of the pro-democracy demonstrations in Tiananmen Square in 1989. He escaped to the U.S., served in the U.S. military, and became a nationalized citizen. According to prosecutors, he announced his intention to run for Congress in the November 2022 general election.

The complaint doesn’t identify the victim, but it appears to be Yan Xiong, who came to the U.S. in 1992 and has announced his intention to run for Congress as a Democrat representing part of Long Island.

According to the complaint, Lin hired a private investigator and allegedly explained that he was working with unidentified individuals in the PRC to stop the victim from being elected to Congress. Lin asked the investigator to find private information about the target, including his name and phone number. Lin also asked for derogatory information, asking to “dig up things from 1989 to now . . . To see if there are any flaws before participating in the election now,” according to the complaint.

If derogatory information could not be found, the investigator was to “manufacture something” and encouraged the investigator to “go find a girl … or see how he goes for prostitution, take some photos, something of that nature,” prosecutors say.

In December 2021, Lin suggested that the investigator physically injure the candidate.

According to prosecutors, Lin said in a voicemail:

You can start thinking now, aside from violence, what other plans are there? Huh? But in the end, violence would be fine too. Huh? Beat him [chuckles], beat him until he cannot run for election. Heh, that’s the-the last resort. You-you think about it. Car accident, [he] will be completely wrecked [chuckles], right? Don’t know, eh, whatever ways from all different angles. Or, on the day of the election, he cannot make it there himself, right?

Shujun Wang, 73, was a founder of the Hu Yaobang and Zhao Ziyang Memorial Foundation, a Queens-based organization dedicated to honoring former leaders of the Chinese Communist Party who advocated for reforms and were ultimately forced from power.

According to prosecutors, Wang’s position in the organization was just a front: since at least 2015, he was working under the direction of four MSS handlers and secretly provided PRC officials with information about prominent activists, dissidents, and human rights leaders, according to the complaint.

“Although Wang is a member of the pro-democracy Memorial Foundation, the investigation has revealed that he has been acting as an agent of the PRC government, using his position with the Memorial Foundation and within the Chinese diaspora community in the New York metropolitan area to collect information about U.S.- based dissidents and to pass that information to the PRC government,” the complaint said.

Alleged victims included people and groups in New York and elsewhere that the PRC considers “subversive,” such as Hong Kong pro-democracy activists, advocates for Taiwanese independence, and Uyghur and Tibetan activists.

One democracy activist in Hong Kong who Wang reported was jailed in April 2020 on political charges. Other activists had been listed on a handwritten document Wang allegedly carried with him when he traveled to New York from the PRC in April 2019.

Wang allegedly communicated with the MSS officials through electronic “diary” entries in what appears to be a shared calendar or email account.

“While operating under the direction and control of MSS officials, Wang communicated the information he gathered through ‘diary’ entries, which he sometimes referred to as ‘William’s diary,'” the complaint says. “While WANG sometimes sent messages containing ‘diary’ entries to his MSS handlers and other PRC officials via email, he also saved them in draft email form to allow others to access the account and read the ‘diary’ entry without the message being sent.”

The complaint alleges that “MSS officers or persons working with them accessed Wang’s email account to retrieve the substance of the “diary” entries.

The complaint also accuses Wang of lying to federal law enforcement during an interview in Queens in August of 2017, when he “falsely den[ied] that he had contacts with PRC officials or the MSS when in fact he had been secretly reporting on U.S. residents to the MSS. Wang later admitted much of his criminal conduct to an undercover member of law enforcement and during a subsequent interview with agents.”

In the third complaint released Wednesday, Fan “Frank” Liu, 62, Matthew Ziburis, 49, and Qiang “Jason” Sun, 40, allegedly hatched a plot to bribe an IRS agent to release the tax documents of a pro-democracy dissident. They are also accused of spying on a dissident artist.

Liu is president of what prosecutors describe as a “purported media company based in New York City.” Ziburis is a former correctional officer for the State of Florida and a bodyguard, and Sun is a PRC-based employee of an international technology company.

Liu, at Sun’s direction, allegedly hired a private investigator to bribe an IRS employee to get the federal tax returns of one dissident.

“The private investigator was cooperating with law enforcement, and no Internal Revenue Service employee received a bribe payment,” the FBI press release said, adding that the defendants planned to publicly disclose the dissident’s potential tax liabilities in order to discredit him.

Liu, Sun, and Ziburis also allegedly planned to destroy the work of a dissent artist who is critical of the PRC government.

Although prosecutors do not name the artist, the complaint includes a picture matching a report of the destruction of Weiming Chen‘s artwork “CCP Virus.”

Ziburis apparently accessed Chen by posing as an art broker, according to the complaint.

“[W]hen you sit down together have table meeting or lunch or dinner, they will ask your background & who your boss, you can say: my [boss] is very rich Jewish man & head of Jewish community, he Donate money to support few democratic presidents & speaker of house, especially Nancy Pelosi,” Liu allegedly instructed Ziburis ahead of his meeting with Chen in California, adding that Ziburis should tell the artist that his “boss” wants to build a “democratic museum” in New York or Washington.

Ziburis surreptitiously installed surveillance cameras at the artist’s workplace and in his car; the live video feed and location data went directly to Sun in the PRC, according to the complaint.

The defendants also allegedly planned to use Liu’s “purported” media company as a cover for “mock media sessions” which were designed to “elicit answers that were intended to humiliate or discredit the dissidents,” according to the FBI.

Liu appeared before U.S. Magistrate Judge James R. Cho on Wednesday and denied the allegations. He was released on $30,000 bond and was placed on electronic monitoring.

Ziburis and Wang were also scheduled to appear.

Read the complaints, below.