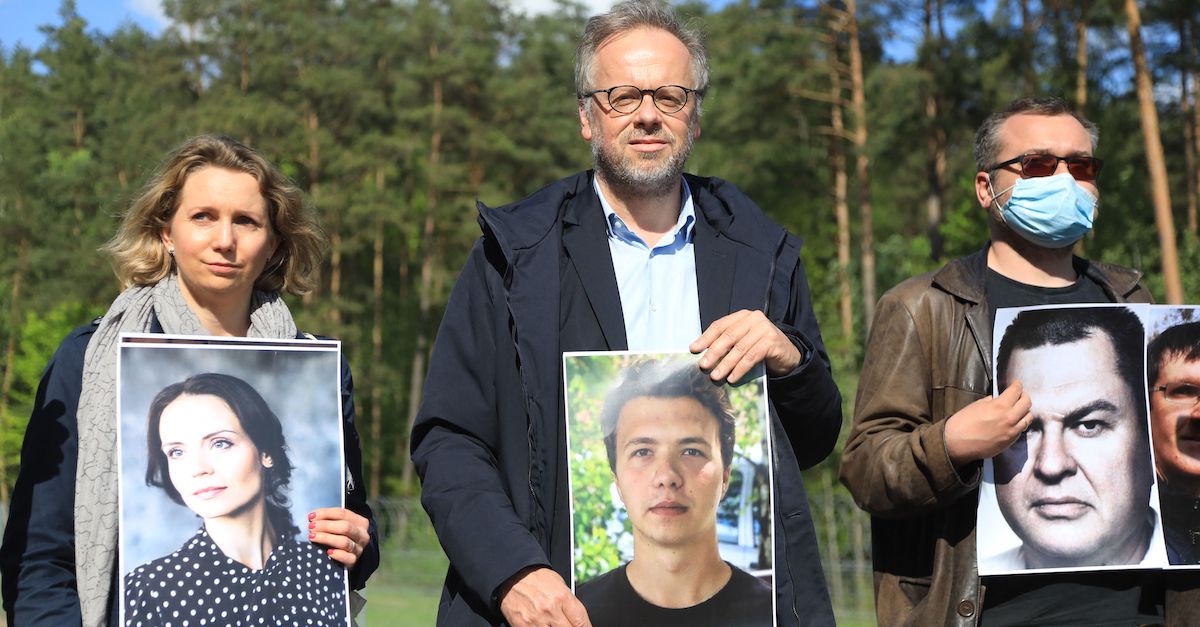 Secretary General and Executive Director of Reporters Without Borders (RSF) Christophe Deloire poses with a photo of detained Belarus journalist Roman Protasevich (C) to protest against the arbitrary detention of Protasevich and nearly twenty other reporters during a visit to the Lithuanian-Belarus border in Salcininkai, Lithuania on May 27, 2021. (Photo by PETRAS MALUKAS / AFP)

U.S. grand jury has indicted four Belarusian government official for “airline piracy” on Thursday in connection with last year’s brazen plot to divert a Ryanair Flight in order to arrest a dissident journalist.

On Sunday, May 23, 2021, Belarusian strongman Aleksandr G. Lukashenko reportedly ordered a fighter jet to intercept a Ryanair plane heading from Athens, Greece, to Vilnius, Lithuania, while the plane was over Belarusian air space. Belarusian air traffic control authorities falsely claimed the more than 100-passenger flight had a bomb threat, the indictment says.

“There was, in fact, no bomb on board the aircraft,” the indictment, unsealed Thursday, notes. “Belarusian government authorities fabricated the threat as a means to exercise control over the Flight and force it to divert from its course toward the original destination of Vilnius, and instead land in Minsk.”

There, authorities detained dissident journalist Roman Protasevich, in what has been called a “state hijacking.”

“Since the dawn of powered flight, countries around the world have cooperated to keep passenger airplanes safe,” Manhattan U.S. Attorney Damian Williams wrote in a statement. “The defendants shattered those standards by diverting an airplane to further the improper purpose of repressing dissent and free speech.”

All four defendants—based in Belarus, which does not have an extradition treaty with the United States—remain at large.

Prosecutors note that Belarusian authorities knew Protasevich, whose name is disguised in court papers as “Individual-1,” was on that flight.

The indictment contains extensive details about the alleged bomb threat the prosecutors say the Belarusian officials concocted, supposedly seeking an already-declared cease fire in fighting between Israel and Hamas.

“We, Hamas soldiers, demand that Israel cease fire in the Gaza Strip. We demand that the European Union abandon its support for Israel in this war. We know that the participants of Delphi Economic Forum are returning home on May 23 via flight FR4978. A bomb has been planted onto this aircraft,” the supposed threat read, according to the indictment.

But a cease fire already had been reached on May 21, 2021, two days before the email claimed by Belarusian authorities, prosecutors note.

The FBI noted that the charged conspiracy, beyond implicating the safety and security of dissidents globally, makes air travel more perilous.

“Not only is what took place a reckless violation of U.S. law, it’s extremely dangerous to the safety of everyone who flies in an airplane,” the bureau’s director Assistant Director Michael J. Driscoll said. “The next pilot who gets a distress call from a tower may doubt the authenticity of the emergency—which puts lives at risk.”

Four U.S. citizen were on board the aircraft, which prosecutors noted in charging the airline piracy statute, which carries a 20-year minimum sentence.