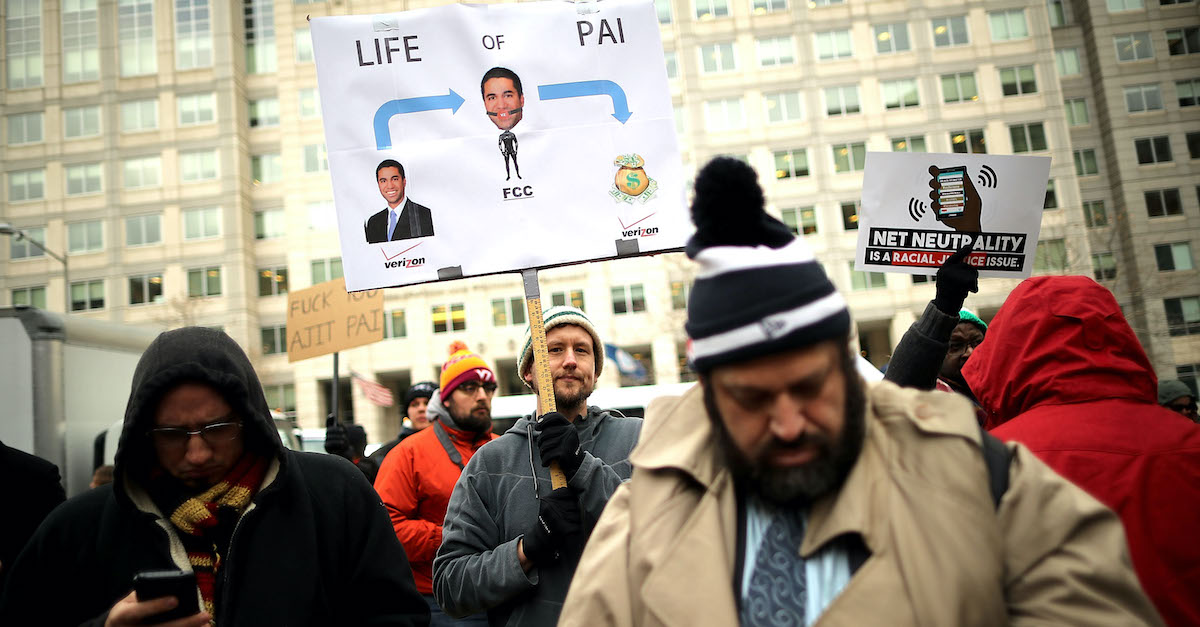 Demonstrators rally outside the Federal Communication Commission building to protest against the end of net neutrality rules on December 14, 2017 in Washington, D.C.

A federal judge in California on Tuesday ruled that the state’s landmark net neutrality law can go into effect, handing a major defeat to the telecom industry which had backed overturning the regulation.

State lawmakers passed the legislation in 2018, but later that year the DOJ under then-President Donald Trump filed a lawsuit to block SB-822, the nation’s most stringent network neutrality bill which would prevent internet service providers (ISPs) from speeding up, slowing down, or otherwise altering internet access by throttling bandwidth or censoring content for end users. The Biden administration dropped Trump-era opposition to SB-822 earlier this month, as Law&Crime reported.

“I don’t find the plaintiffs have demonstrated a likelihood of success on the merits at this stage of the litigation,” Mendez said, according to a report from Courthouse News. “This is not the type of pervasive regulatory system that left no room for state law.”

According to a report from the Hollywood Reporter, the recent winter storm that caused havoc in Texas leaving millions without power for days appeared to play a significant role in Judge Mendez’s ruling, as the Lone Star state had spent decades deregulating the industry hoping that increased competition would result in lower prices for consumers.

“Let’s say SB-822 is enjoined,” the judge reportedly said to one of the attorneys representing the telecom industry. “And [thanks to the recent repeal of federal net neutrality rules], there is no power by the FCC to regulate your clients. Why shouldn’t a court be concerned if there is no regulation over ISPs?”

Mendez added that Congress should be the branch of government responsible for giving broadband providers more certainty regarding how they can manipulate internet access, not the judiciary.

Mendez also apologized to both parties for not issuing a written opinion, saying the bench ruling was necessary due to the continued lack of resources in the Eastern District of California court system.

SB 822 is the strongest net neutrality law in the nation. We worked incredibly hard to pass this law, overcoming massive corporate opposition. California can now fully protect an open internet.

California state Sen. Scott Wiener (D-San Francisco) said Tuesday’s ruling was “a huge victory for open access to the internet, our democracy and our economy.”

“The internet is at the heart of modern life. We all should be able to decide for ourselves where we go on the internet and how we access information,” said Wiener, who also noted on Twitter that he authored the net neutrality law. “We cannot allow big corporations to make those decisions for us.”