Likening the Florida governor’s measure to backlash against desegregation in the American South, a federal judge, a federal judge blocked Gov. Ron DeSantis’s (R) expansive definition of a riot in a passionate and historically sweeping ruling on Thursday.

This past May marked the 60th anniversary of the Freedom Rides, when a diverse group of 13 activists headed south on Greyhound and Trailways buses from Washington, D.C. to protest segregation.

Another peaceful protest on a bus some five years earlier is where the Northern District of Florida’s Chief U.S. District Judge Mark E. Walker begins his 90-page opinion.

“On May 27, 1956, Wilhelmina Jakes and Carrie Patterson, two Black students from Florida Agricultural and Mechanical University in Tallahassee, boarded a local city bus,” the ruling begins. “They sat in the only available seats, which were in the “whites-only’ section. The two women refused to move when ordered to do so, and the bus driver called in the police.”

Jakes and Patterson were arrested and charged with “inciting a riot.”

So were the Freedom Riders who arrived at Tallahassee Airport in 1961, the judge notes.

“What’s Past Is Prologue”

It is in this pantheon that Judge Walker, a Barack Obama appointee, places the plaintiffs in this case, a coalition of racial justice advocates led by the Dream Defenders.

“What’s past is prologue,” the judge wrote, quoting William Shakespeare. “Now this Court is faced with a new definition of ‘riot’—one that the Florida Legislature created following a summer of nationwide protest for racial justice, against police violence and the murder of George Floyd and many other people of color, and in support of the powerful statement that Black lives matter.”

The DeSantis-backed HB1 envisioned felony punishment based on what the judge found to be an unconstitutionally nebulous definition of a riot.

The DeSantis administration tried to cast doubt on that by arguing that one of the groups, Chainless Change, promoted a “Juneteenth Black Joy Celebration” in West Palm Beach in observance of the national holiday, not fearing the new law. 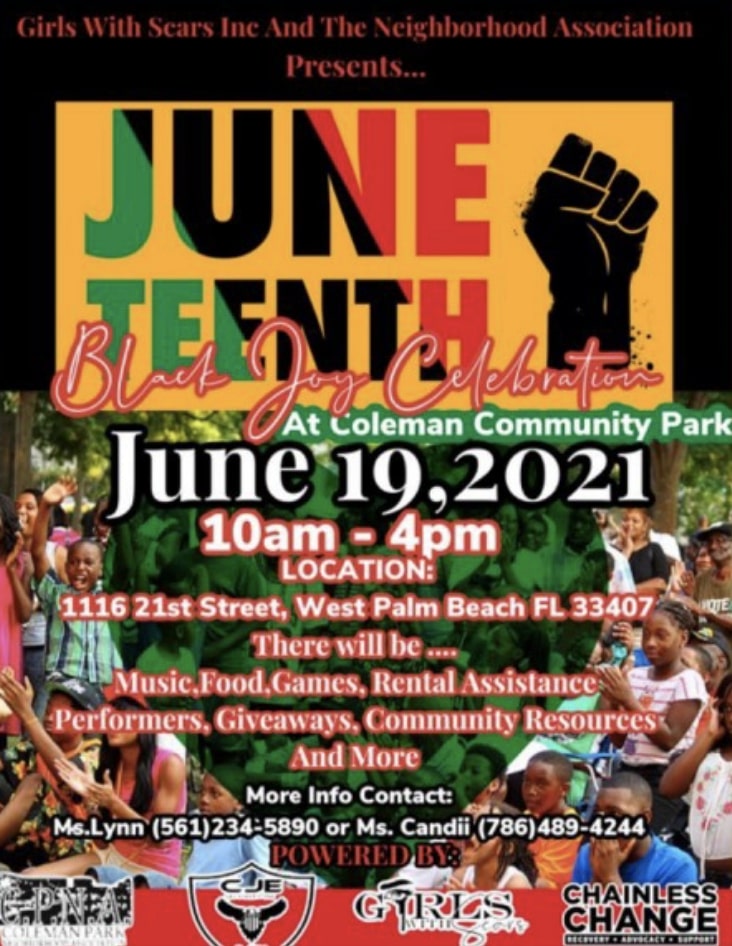 This is the Facebook promotion for a Juneteenth gathering that Gov. DeSantis claimed showed the anti-riot law did not have a chilling effect.

For Judge Walker, the governor’s would-be counterpoint may have left a different impression than he might have intended.

“It should go without saying that a public gathering of Black people celebrating ‘Black joy’ and release from bondage does not automatically equate to a protest—or something that the Governor apparently implies should be chilled by the new riot law if plaintiff Chainless Change’s claimed injury is to be believed,” Walker wrote.

“If Governor DeSantis included this particular post to imply that any gathering of Black people in a public space is a de facto protest, plaintiffs’ concerns about the how the statute’s new definition of ‘riot’ will be enforced are indeed well-founded,” he added in a footnote.

“Next Time, It Could Be Their Ox Being Gored”

Judge Walker emphasized that his order does not strike the definition of “riot” from the Florida statutes, nor does it block every aspect of HB 1. The ruling’s “narrow relief” preliminarily enjoins the governor and three sheriffs from enforcing Florida’s law against “rioting” as defined by a specific section of the law: 870.01(2).

“This definition of ‘riot’ casts a broad net,” the ruling states. “Though plaintiffs claim that they and their members fear that it will be used against them based on the color of their skin or the messages that they express, its vagueness permits those in power to weaponize its enforcement against any group who wishes to express any message that the government disapproves of.”

“Thus, while there may be some Floridians who welcome the chilling effect that this law has on the Plaintiffs in this case, depending on who is in power, next time it could be their ox being gored,” Walker added.

Walker emphasized that his injunction will take effect “immediately,” without a stay should the governor appeal.

“This Court is also not saying that the Florida Legislature is unable to expand upon the common-law definition of a riot, or that it is not allowed to enhance the crime, or that it cannot enact tougher penalties for rioting,” he wrote. “It is the Florida Legislature’s prerogative to enact such policies. But it must do so within the bounds of the Constitution. In this case, it has failed to do so.”

Gov. DeSantis’s spokeswoman Taryn Fenske said they “vehemently disagree” with the decision, which they plan to appeal to the 11th Circuit.

“There is a difference between a peaceful protest and a riot, and Floridians do not want to see the mayhem and violence associated with riots in their communities,” she told Law&Crime in an email.

Judge Walker’s ruling details the history of the “protest” and “riot” dichotomies being blurred, particularly in the context of racial justice demonstrations. The crux of the order aims to restore the defamation of the latter category, and the judge ends it with the same literary and historical flourish where he began.

“Though what’s past is prologue, this Court need not give it any power beyond providing context for the case now before it,” he wrote. “A critical part of that context, which has not yet been discussed, is that following Ms. Jakes’s, Ms. Patterson’s, and the 1961 Freedom Riders’ arrests under Florida’s anti-riot laws, the rule of law ultimately prevailed.”

“And so too, with this Court, the rule of law prevails,” he added.