The defense case of Lev Parnas began on Tuesday afternoon with testimony by a director of a pro-Trump super PAC that received a six-figure donation from the former Rudy Giuliani associate’s business.

Prosecutors original planned to call Ahearn as a government witness, alleging that the donation was illegally funneled through a straw donor.

The government reversed course in the middle of their case, which opened and wrapped in less than a week.

Parnas’s defense subpoenaed and called Ahearn, who agreed to testify through court-ordered immunity.

“Yes, because of where we are and accusations being made, I thought that immunity was a good idea,” explained Ahearn, who said before the jury entered that he would “potentially” invoke his Fifth Amendment rights if not immunized.

A longtime political operative, Ahearn cut his teeth in politics working on John McCain’s campaign in 2008. He has also worked with such figures as ex-New York City Mayor Michael Bloomberg and former Rep. Nan Hayworth (R-N.Y.).

When he first met Parnas, Ahearn had been working with America First Action, and he told a jury that he learned of the defendant’s existence through a mutual contact: Stephen Katz, a former New York legislator behind a cannabis venture for pets. Specifically, the business involved CBD products for dogs.

Parnas said that he could steer Ahearn to the likes of the Robert Pereira, the billionaire property developer.

A once-omnipresent Republican mover and shaker, Parnas flaunted his associations to the rich and powerful during the time of former President Donald Trump’s first impeachment. Bondy mentioned some of those connections during his questioning, including Florida energy magnate Harry Sargeant and ex-Energy Secretary Rick Perry.

During another event at the Trump International Hotel, Parnas tried to interest Trump and his son, Donald Trump, Jr., in having the Republican party support cannabis legalization as a midterm election strategy, secretly recorded video showed.

Ahearn conceded under Bondy’s questioning that he helped craft certain questions Parnas asked about marijuana for this event.

During the height of Trump’s impeachment scandal, the House Judiciary Committee released WhatsApp messages exchanged between Parnas and Ahearn, including ones appearing to discuss what members of the Trump family should tweet. 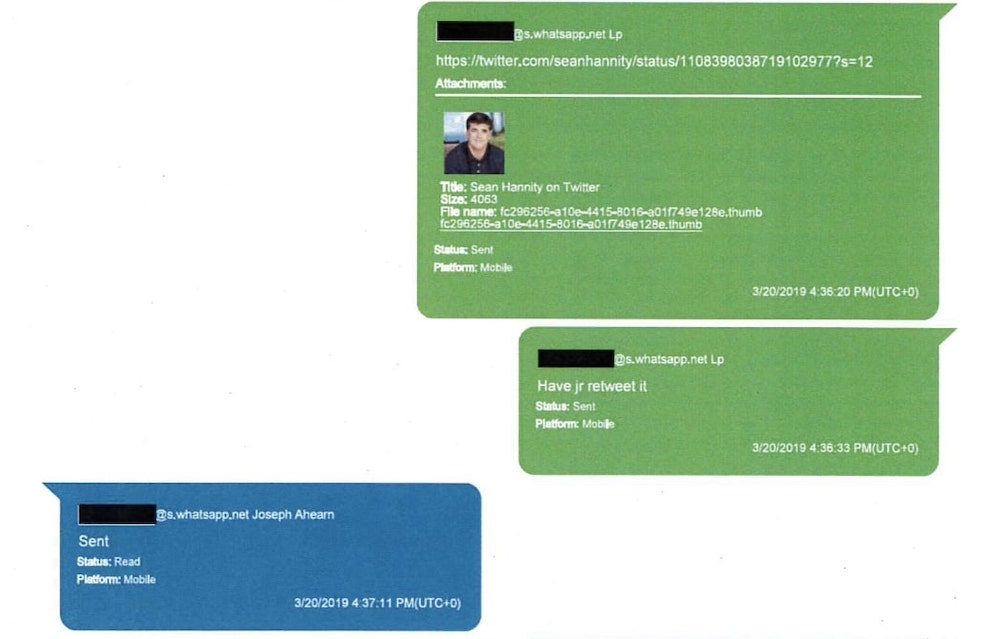 Though Parnas’s case was originally associated with Trump’s Ukraine scandal, that two-year-old episode has barely registered at his trial. The prosecution’s case has focused on Parnas’s alleged conspiracy to funnel money from Russian investor Andrey Muraviev. The government claims Parnas and his alleged co-conspirator Andrey Kukushkin tried to ingratiate politicians to their side with this money to support their cannabis businesses.

The first indictment accused Parnas of being a part of the attempt to oust former U.S. Ambassador to Ukraine Marie Yovonavitch, in order to remove an obstacle from a plot to manufacture dirt against that then-candidate Joe Biden.

The superseding indictment omitted those details, and the tale of intrigue that gripped Washington two years ago barely registered as the government opened and closed its case.

Ahearn was the sole defense witness to be called before the close of proceedings on Tuesday.

On Wednesday, the defense team is expected to decide whether Parnas will testify on his own behalf.

(Photo from Timothy A. Clary at AFP via Getty Images)