Donald Trump Jr. Hints at Possible Setup by Robert Mueller Down the Road 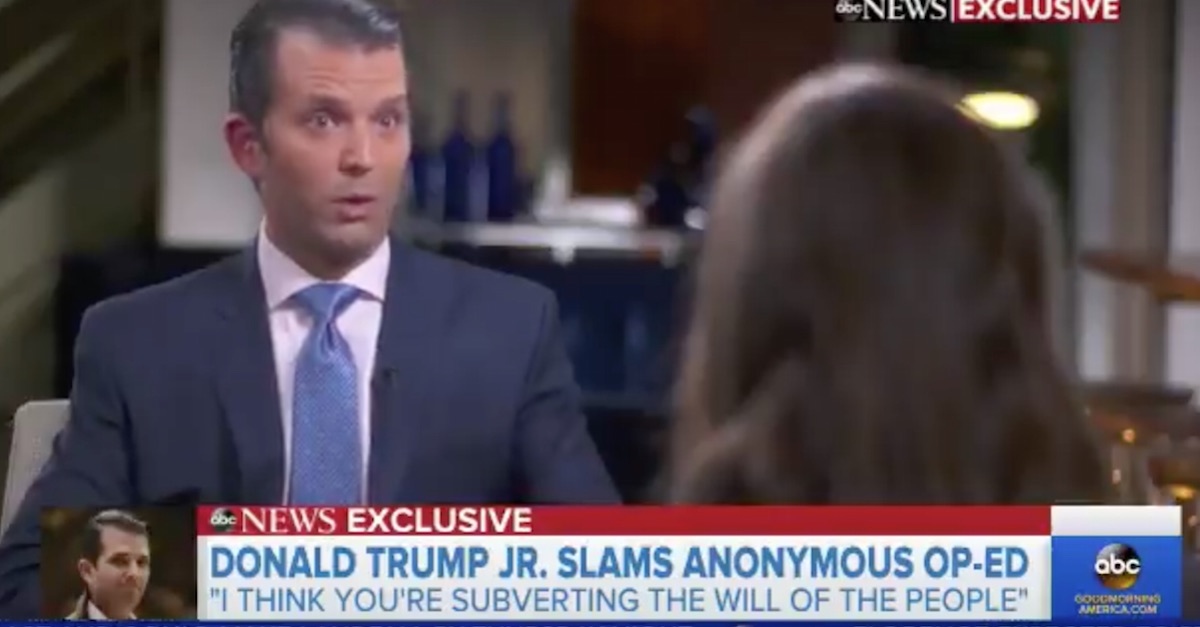 In an exclusive ABC News interview published Tuesday, Donald Trump Jr. gave his thoughts on a couple of matters of recent note, plus some things yet to come. One thing he noticeably didn’t rule out, as he suggested it in the first place, is that special counsel Robert Mueller may “try something.”

That sure sounds like Trump Jr. expects a setup.

ABC’s Tara Palmeri asked Trump Jr. if he’s worried about legal trouble down the road because of that 2016 Trump Tower meeting with a Russian lawyer and his ensuing testimony about it.

He said that he’s “not worried about it” because “I know what I did.”

“That doesn’t mean they [Mueller Probe] won’t try to do something,” he said. “[I’ll] deal with it as it comes.”

He said the investigation has been “very rough” on him, but maintains he’s “done nothing that anyone else wouldn’t do in that position, in my opinion.”

Sticking with the theme of a setup, he suggested “there will never be a conclusive end” to the Mueller investigation because of Democrat partisanship.

Another topic Trump Jr. was asked about was whether he thought the anonymous op-ed penned in the New York Times by a “senior official” in the Trump administration amounted to a crime.

“I imagine this is a very low-level person,” he said. “That’s pretty disgusting, that’s pretty sad.”

“Perhaps it’s a disgruntled person who’s been thrown out because they didn’t deliver on what they were supposed to do,” he speculated.

“What’s the crime, though?” Palmeri asked.

“I think you’re subverting the will of the people. To try to control the presidency, while not the president … you have millions and millions of Americans who voted for this,” he answered.

You can watch a snippet of the interview below.

EXCLUSIVE: Donald Trump Jr. says he believes the New York Times op-ed penned by an anonymous senior administration official was written by a “very low-level person" and that the Justice Department should investigate the author https://t.co/4PhvkL0UvD pic.twitter.com/9jqncd8FaO