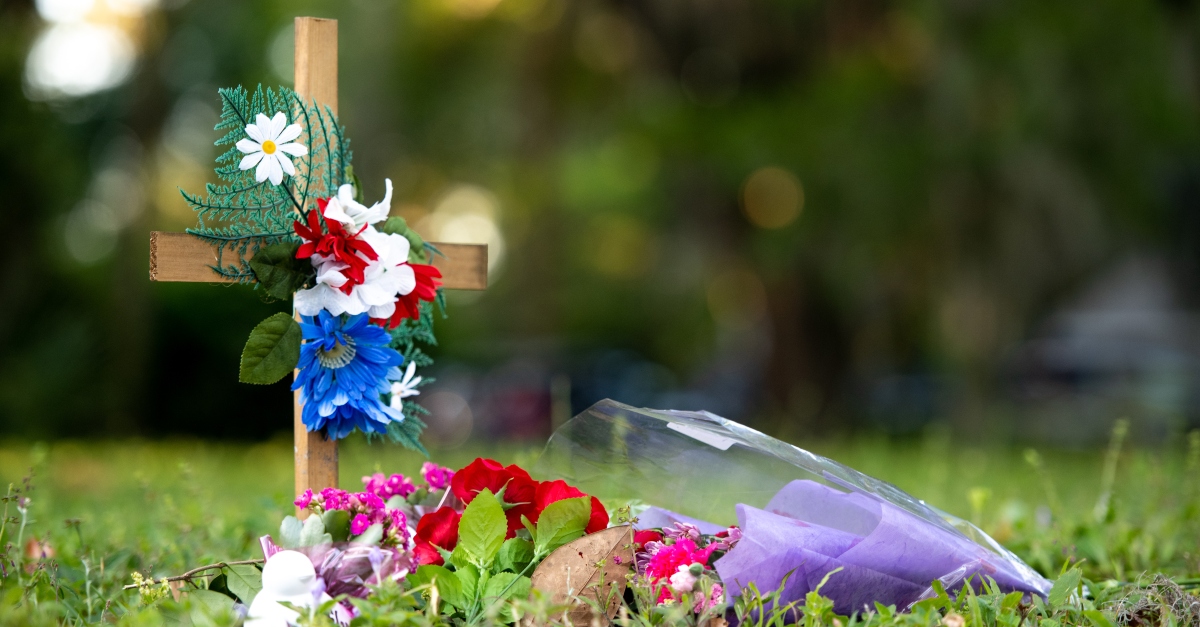 Cross and flowers near where Ahmaud Arbery was shot and killed.

A spokesperson with the Department of Justice says the department is examining whether hate crime charges should be brought in the Ahmaud Arbery case.

“We are assessing all of the evidence to determine whether federal hate crimes charges are appropriate,” Kerri Kupec said in a statement released Monday. “In addition, we are considering the request of the Attorney General of Georgia and have asked that he forward to federal authorities any information that he has about the handling of the investigation. We will continue to assess all information, and we will take any appropriate action that is warranted by the facts and the law.”

Georgia does not have a hate crime statute.

Arbery was shot and killed February 23 in Brunswick, Georgia. The case landed on a fraught cultural fissure. The alleged victim was black, and the duo implicated in his death–Gregory McMichael, 64, and alleged shooter Travis McMichael, 34–are white. The elder McMichael allegedly told cops that they confronted Arbery because they believed he was the suspect in a recent string of burglaries, and that Travis opened fire in self-defense. Over two months passed without an arrest, but video of the incident went public. Footage sparked an outcry and spurred action from authorities. It apparently showed that the McMichaels instigated the confrontation by trying to block Arbery with a pickup truck.

Now the father-son duo are charged with murder and aggravated assault. They’ve been denied bond. They could not be immediately reached as of press time. Before the arrests, they declined to comment on the shooting.

Law&Crime host and analyst Brian Buckmire, a New York-based defense lawyer unaffiliated with the case, has argued that the facts do not rise to the level of a hate crime, and it’s unlikely that the McMichaels would’ve been charged with one even if Georgia had the relevant statute.

“Race is 100-percent a factor in the killing of Ahmaud Arbery,” Buckmire wrote in a column published Sunday. “Few can argue Arbery would have died if he was white. Few can argue that the McMichaels would have been free for almost three months if they were not white. But those are issues of prejudice, racial profiling, cross racial identification and a county that appears to be more concerned about taking care of its own than upholding justice.”

“Taking the stance that Travis and Gregory McMichael should not be prosecuted for a hate crime is not a suggestion that we should remove the issues of race from the murder of Ahmaud Arbery,” Buckmire explained. “Rather, it is to focus on the goal of seeking justice in the court in an unjust killing.”