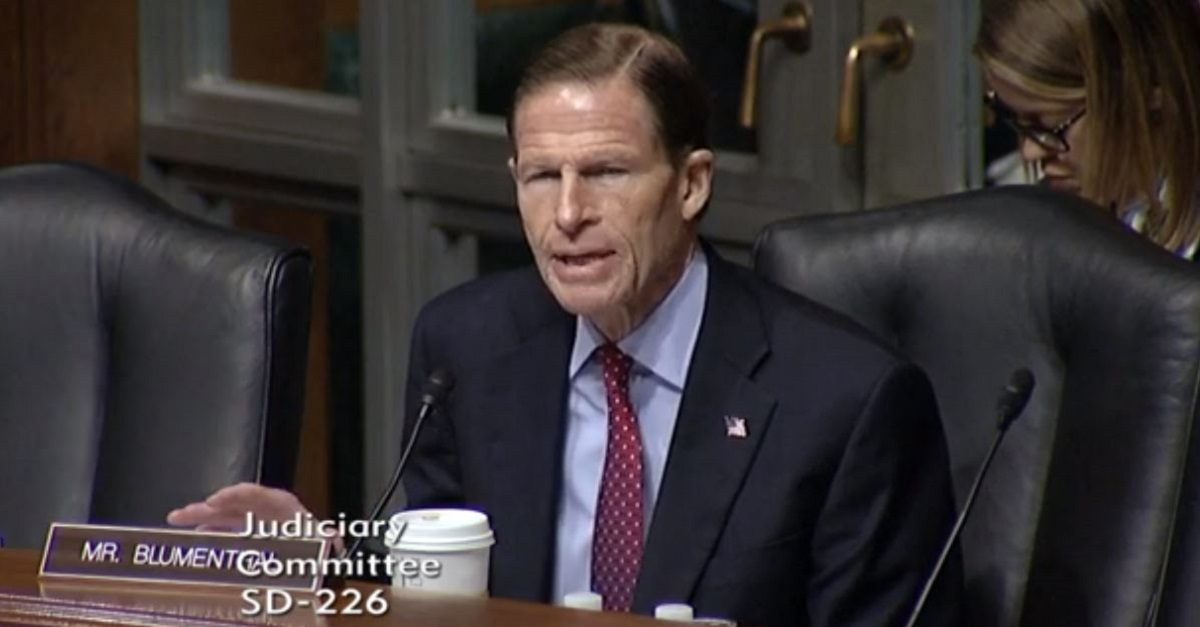 U.S. Deputy Attorney General nominee Jeffrey Rosen‘s confirmation hearing had been going fairly smoothly, but things took a turn when it was time for Sen. Richard Blumenthal (D-Conn.) to ask questions. Blumenthal tried to grill Rosen about whether or not he would support the full release of Special Counsel Robert Mueller‘s Russia report, and went as far as to threaten not to vote for him if he doesn’t. It didn’t work at all, as Rosen told him it’s not really a question for someone in his position, and that Blumenthal’s question itself was too simplistic.

As soon as it was his turn, Blumenthal said he wanted Rosen to support the release of the full Mueller report. U.S. Attorney General William Barr said he plans to release a version next week with information such as secret grand jury information and intelligence sources and methods redacted. Democrats want all of it.

“I want your commitment here that you will support full and release of that report to the United States Congress without redactions or edits of any kind,” Blumenthal stated.

Rosen responded by trying to say that it’s not up to him, but he didn’t get very far. The grand jury information in particular is deemed secret by the Federal Rules of Criminal Procedure, with courts only authorized to order disclosure in specific circumstances. In theory, the Justice Department could request such an order, but that’s not the job of the Deputy Attorney General. During a separate hearing on Tuesday, Barr cited a recent court decision about this, implying that such a request would likely be denied.

“Well, Senator, I’d like to say this respectfully, but uh, if I’m confirmed I would be the Deputy Attorney General and I’d be working for the Attorney General,” Rosen said before being cut off.

“I’m asking for your views, I understand your position,” Blumenthal said. “I want your commitment that you personally, as the second in command of the United States Department of Justice will support full release of that report.”

“So, uh, Senator,” Rosen began, only for Blumenthal to interrupt by saying, “It’s a yes or no question.”

“It’s really not,” Rosen shot back. “There are circumstances where ‘yes’ or ‘no’ is itself misleading, so I’m not trying to be evasive but I’m trying to avoid saying something that by its incompleteness would be misleading because I’m sure you don’t want that. So you’re talking about a situation–,” Rosen said, but that’s as far as he got before being interrupted again.

“Let me just tell you, Mr. Rosen,” Blumenthal said, before recalling the time that outgoing Deputy AG Rod Rosenstein was asked during his confirmation hearing about appointing a Special Counsel. At the time, Rosenstein wouldn’t commit to doing so (even though he later appointed Mueller), and Blumenthal voted against him.

“And I will vote against you if you fail to commit that you will respect the institutional authority and obligation of the United States Congress to review that report,” Blumenthal warned. “Will you support complete and total disclosure?”

Rosen said he values and respects the relationship between Congress and the Executive Branch, “but I’ve indicated pretty clearly that I’ve had no involvement in the Mueller proceedings,” and that he’s not currently a part of the Justice Department.

Blumenthal, acknowledging that he wasn’t getting anywhere, then cut Rosen off and moved on to a different question.