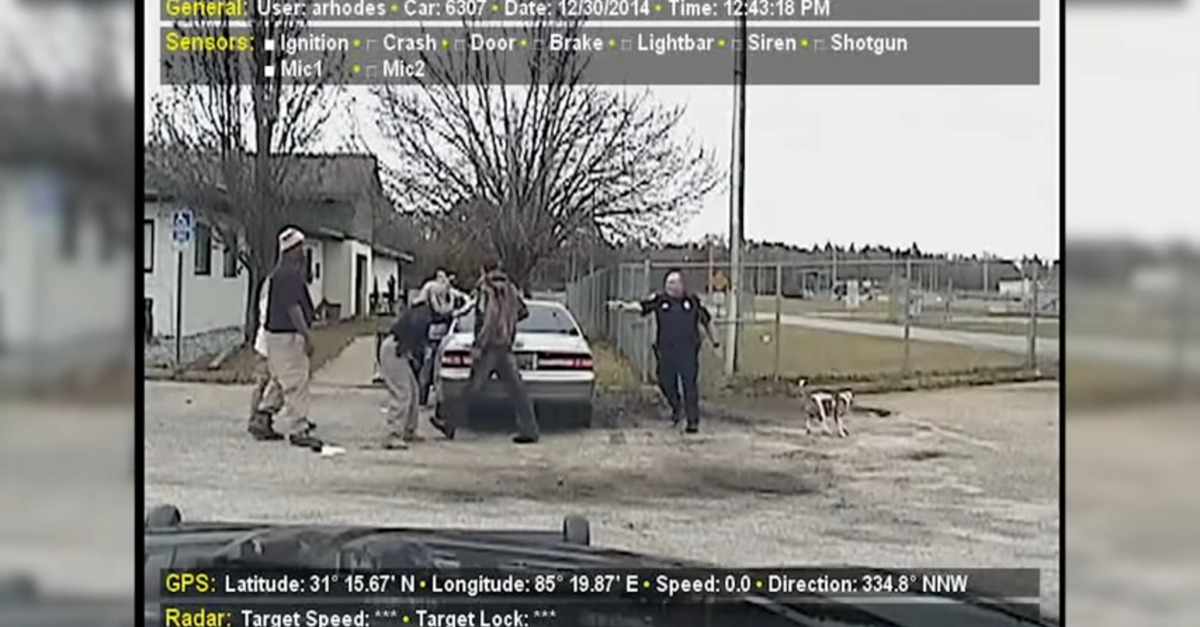 A federal appeals court on Thursday declined to grant qualified immunity to an Alabama police officer who shot and killed a man “without warning” for failing to show identification after he attempted to help a stray dog his family found in a parking lot.

Robert Earl Lawrence was shot in the stomach by Dothan Police Sergeant Adrianne Woodruff and he bled out on the pavement “on the next to last day of the year” in 2014. His three young children and his girlfriend were in the car–screaming while it happened.

Prior to his death and altercation with police, Lawrence, reportedly a sovereign citizen, was just trying to help the dog his family found near the local Walmart by taking it to the Dothan Animal Shelter.

“The receptionist told Lawrence that they accepted dogs only from residents of Houston County,” the court notes. “He told her that he was from nearby Geneva County but had found the dog in Houston County. She agreed to take the dog but asked for his identification. He refused to provide it, claiming that being required to do so would violate his federal privacy rights.”

A brief argument ensued and Woodruff entered the room–reiterating the shelter’s policy about accepting strays and advising Lawrence to fill out an intake form. He declined and left the shelter, “carrying the dog with him,” saying he would just leave the animal on the road.

Woodruff followed Lawrence out and warned him that dumping the dog would be considered a crime. She also copied down his tag number–in line with a policy for people who threaten to dump animals the shelter refuses to take in. As Lawrence got into his car, Woodruff grabbed him from behind and said “You’re not leaving.”

He didn’t try to leave but instead argued with Woodruff as his girlfriend recorded the incident. The sergeant asked Lawrence for his driver’s license and instead he gave her a document called an “Affidavit of Identity” that is used by sovereign citizens as a form of protest against police identification requests. Woodruff apparently took this document to mean that Lawrence did not have a driver’s license and the two continued arguing as back-up arrived.

The decision highlighted an “insult” from the cop:

After more argument, Sergeant Woodruff asked Lawrence, “Do you know how foolish you sound?” She also insulted him: “You’re so smart, you got half your teeth in your mouth.” (Some of Lawrence’s front teeth were missing.) He responded, “Oh, so now you’re going to humiliate me because of my poor hygiene . . . .” And so the argument went.

Lawrence eventually got out of his car to accuse Woodruff of violating the U.S. Constitution and to ask for his “Affidavit of Identity” back. The sergeant shouted back: “You’re not driving out of here without a driver’s license! Which part of that don’t you understand?”

Eventually, Officer Alan Rhodes arrived and after a brief back-and-forth, attempted to handcuff and arrest Lawrence who shouted: “Don’t touch me!”

“Rhodes grabbed Lawrence and tried to turn him around to handcuff him,” the decision notes. “They struggled and Rhodes put him in a chokehold. Sergeant Woodruff joined in the tussle to assist Rhodes, and the two of them held Lawrence with his back pushed against the rear driver’s side door of the car.”

Notably, Eleventh Circuit Court of Appeals Judge Ed Carnes describes the man’s resistance in the following terms: “Lawrence would not submit and resisted –– not aggressively, but vigorously.”

Amid the ensuing struggle, a Taser was used repeatedly. But the weapon failed to strike its mark on the first effort. Rhodes gained control over Lawrence, however, and averred in deposition testimony that he was not going to let him go until another officer arrived–even though the Taser apparently struck the officer’s own leg a few times.

Initially, Rhodes had attempted to use the Taser by firing it at Lawrence but the dead man’s jacket stopped the firing prong function from working. Woodruff was then passed the Taser and successfully used it against Lawrence. A third officer then intervened in the scuffle. Seconds later, Woodruff shot and killed Lawrence.

According to the sergeant:

Lawrence used his one free arm and hand to grab her wrist and twist it and in that way got the taser away from her. Her story is that after gaining control of the taser, Lawrence turned it around in his hand so that his finger was on the trigger and pushed it toward Rhodes’ leg. It was then that Officer [Renee] Skipper grabbed onto the taser and tried to pull it away from Rhodes’ leg.

Video evidence in the record appears to contradict Woodruff’s account of those final and fatal moments [emphasis in original]:

The video shows that Officer Skipper stepped in and grabbed something, although it is not clear whether it was the taser or Lawrence’s arm. The video apparently shows (and for defeating summary judgment…that is close enough) that while Woodruff was tasing or attempting to tase Lawrence, Skipper raised her arm, and both Lawrence’s arm and Woodruff’s arm followed it upward. From that, a jury could reasonably find that until the moment when Woodruff let go of the taser or of Lawrence’s hand and reached for her service weapon to shoot him, he did not have control of the taser; instead Woodruff and Skipper both had a hold of the taser or of Lawrence’s hand that was grasping at it.

“A jury could reasonably discredit Woodruff’s contrary testimony in favor of that interpretation of the video,” Carnes reasoned. “Or a jury could reasonably credit her testimony over that interpretation of the video. Considering both the deposition testimony of the officers and the video evidence, as we said in another excessive force case: ‘There is material evidence in the record supporting both accounts.'”

Woodruff applied for the controversial doctrine of qualified immunity in an effort to have the lawsuit against her–which was filed by Christopher Cantu, the executor of Lawrence’s estate–dismissed on summary judgment.

After a lengthy analysis, and using the summary judgment standard that views the evidence in the light most favorable to the plaintiff, the court determined that she was not entitled to such protections.

Again the decision, at length:

[T]he use of lethal force was so obviously excessive that any reasonable officer would have known that it was unconstitutional, even without pre-existing precedent involving materially identical facts….Lawrence was not committing a dangerous felony, or even a non-dangerous one. He was just trying to drop off at an animal shelter a stray dog he had found in a parking lot earlier that day.

The underlying crime for which he was being arrested was, at worst, driving without a license, the maximum punishment for which is a $100 fine. The only flight he engaged in was running around his car on two occasions when he managed to break loose from the officers who were trying to handcuff him. He did resist being handcuffed and arrested, but not violently. He never punched, hit, or kicked any of the officers or attempted to do so. He never tried to harm any of them in any way.

“While being held by an officer who outweighed him by 75 pounds, another officer tased him at least twice in the abdomen,” Carnes continues. “When he grabbed at the taser in an attempt to avoid being tased again, he and two of the three officers struggled over it, but Lawrence never gained control of it. At that point the officer who had been tasing him let go of the taser, drew her firearm, and fatally shot him without warning, all in the space of three seconds.”

Cantu v. City of Dothan by Law&Crime on Scribd