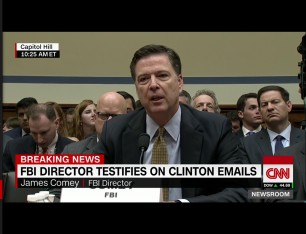 FBI Director James Comey testified on Thursday before the House Committee on Oversight and Government Reform Committee.  In a surprising turn of events, Congressman Jason Chaffetz announced that he would be sending a referral to the FBI to investigate whether Hillary Clinton lied under oath during her testimony before the Select Committee on Benghazi in October 2015.

Early on during Committee Chairman Jason Chaffetz’s opening questions, he asked Director Comey if the FBI investigated whether Hillary Clinton lied under oath.

“Not to the FBI, not in a case we are working,” Director Comey replied.

Congressman Chaffetz then clarified that he was referring to her testimony before the Select Committee on Benghazi in October 2015.

“Did you review the documents where Congressman Jim Jordan asked her specifically, and she said ‘There was nothing marked classified on my emails either sent or received,’” Congressman Chaffetz asked.

“I don’t remember reviewing that particular testimony,” Director Comey replied.  “I am aware of that being said, though.”

“Did the FBI investigate her statements under oath on this topic?” Congressman Chaffetz asked.

“Not to my knowledge — I don’t think there has been a referral from Congress,” Director Comey replied.

“Do you need a referral from Congress to investigate her statements under oath?” Congressman Chaffetz asked.

“Sure do,” Comey replied.

Congressman Chaffetz then left no doubt that the FBI would have one, very soon.

There has been speculation about whether Congress would move forward with action on this issue from almost the moment Director Comey’s press conference on Tuesday morning.  It now appears as though we have an answer to that question.