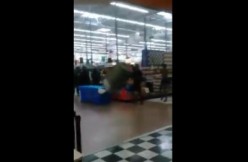 30 people were linked to a Sunday brawl at a Walmart in Gates, New York. It allegedly started after two 17-year-old girls made fun of a 24-year-old woman’s dress, NBC News reports.

Video of the incident was posted Tuesday to Facebook. In it, you can see someone throwing a garbage can, people screaming, police intervening, etc. (Warning for language.)

“The adults jumped right in with the kids and this is what it turned into,” he told WHEC.
–