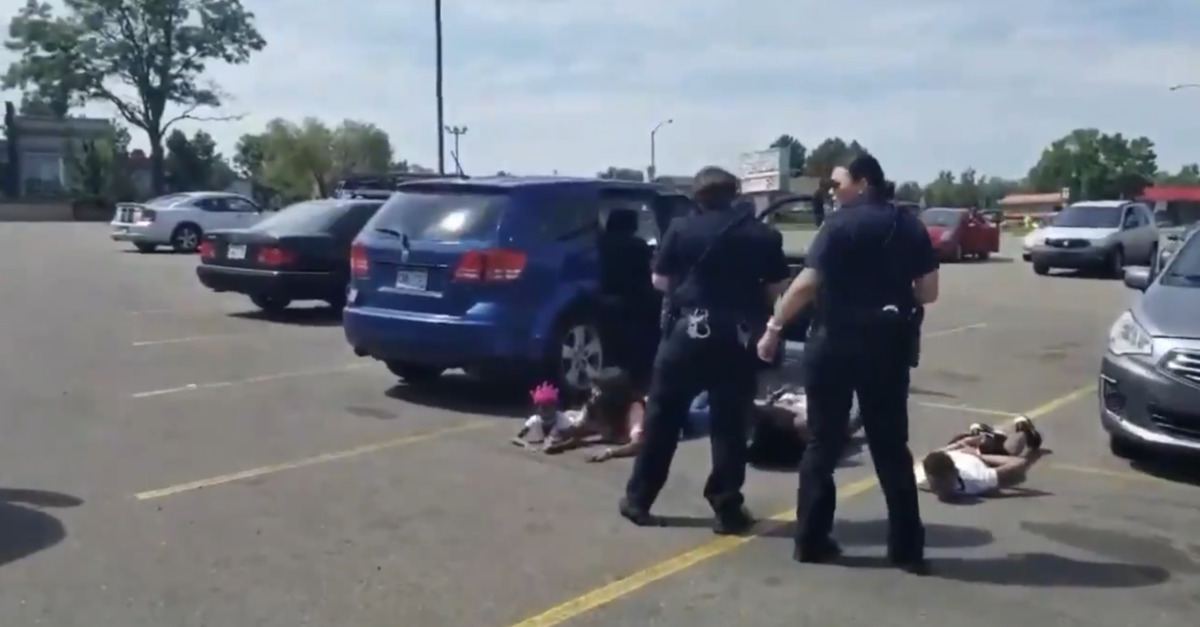 Numerous police officers arrived on the scene as a Black family of five in a sport utility vehicle (SUV) was stopped, handcuffed, detained at gunpoint on the ground in a shopping center parking lot on Sunday because they were allegedly mistaken for a stolen motorcycle from out-of-state.

“I want my mother!” the smallest child, 6 years old and wearing a pink crown, cries out as the police detain the family. Another fear-stricken child repeatedly pleaded for her sister.

Aurora PD pulls over a family for a suspected stolen vehicle. Police got   the family out of the van at gunpoint and cuffed them face down on the concrete. They check the plates, but it turns out they were looking for a stolen motorcycle, not a van. https://t.co/TjRFKzWXik

“There’s no excuse why you didn’t handle it a different type of way,” Brittney Gilliam said. Gilliam told local NBC affiliate KUSA-TV that she was taking her daughters and nieces out for a spa day.

“You could have even told them ‘step off to the side let me ask your mom or your auntie a few questions so we can get this cleared up.’ There was different ways to handle it,” she said.

Multiple videos of the incident have been viewed millions of times as of this writing–prompting the Aurora Police Department to apologize for their widely criticized behavior.

Wow! This innocent Black family was detained at gunpoint by @AuroraPD officers today — down on a hot concrete ground for a mistakenly identified stolen vehicle. They were pulled over and all placed in handcuffs, even their 6-year old child!! #DrivingWhileBlack pic.twitter.com/dgRx3JSmeO

“Wow, whole family of kids,” one man filming the stomach-churning episode says. “They got kids out of the car. Wow. They got a whole family pulled out. This is horrible. What the fuck is going on? They got a baby girl on the floor. This is fucking absurd.”

Jennifer Wurtz shot the most popular video of the incident.

“Why are you now placing these children on the ground face into the concrete?” she asks. “It’s hot! In front of all of us? Screaming at them. They are telling you they are hurt.”

Police eventually responded–telling her to back away because she was interfering in an investigation, according to The Denver Post.

That investigation either went awry or was suspect from the start.

Police claim they mistook the SUV for a stolen motorcycle because the minivan-style vehicle with Colorado plates had the same license number as the allegedly stolen bike with Montana plates. It’s unclear why police ran the family’s plates to begin with.

The Aurora Police Department most recently attained notoriety for its behavior after Elijah McClain’s in-custody death. The 23-year-old Black massage therapist, his sister said, was walking and listening to music on his headphones in the moments leading up to the fatal encounter with law enforcement on August 19, 2019.

Months later, Aurora cops took a selfie at the McClain memorial site, with one of the then-officers apparently imitating the chokehold that was used on McClain.

“It’s like they don’t care,” Brittney Gilliam’s 14-year-old niece Teriana Thomas said of the department, according to KUSA. “Who am I going to call when my life is in danger?”

Police leadership has since called the incident “traumatic.”

“We first want to offer our apologies to the family involved in the traumatic incident involving a police stop of their vehicle yesterday.” Interim Police Chief Vanessa Wilson said in a statement. “We have been training our officers that when they contact a suspected stolen car, they should do what is called a high-risk stop. This involves drawing their weapons and ordering all occupants to exit the car and lie prone on the ground.”

“But we must allow our officers to have discretion and to deviate from this process when different scenarios present themselves,” the police chief’s statement continued. “I have already directed my team to look at new practices and training. I have called the family to apologize and to offer any help we can provide, especially for the children who may have been traumatized by yesterday’s events. I have reached out to our victim advocates so we can offer age-appropriate therapy that the city will cover.”

The department later changed their story a bit–suggesting the stop initially occurred because Gilliam’s vehicle was reported stolen earlier this year.

“The confusion may have been due, in part, to the fact that the stopped car was reported stolen earlier in the year,” a statement said. “After realizing the mistake, officers immediately unhandcuffed everyone involved, explained what happened and apologized.”

But according to Gilliam’s attorney, Aurora Police themselves returned Gilliam’s vehicle to her after it was stolen in February.