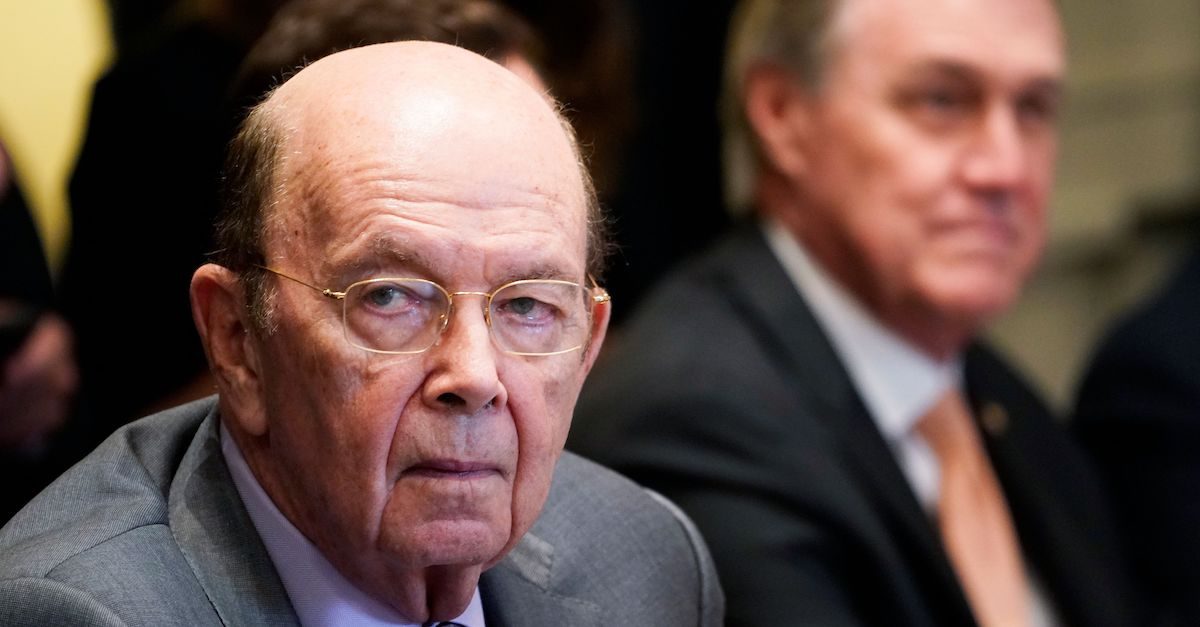 Calls for Wilbur Ross’s resignation intensified Monday following a New York Times report that the Secretary of Commerce threatened to fire top officials at the National Oceanic and Atmospheric Administration (NOAA) after the agency’s Birmingham office contradicted President Donald Trump’s incorrect claim that Alabama was going to be hit by Hurricane Dorian.

Ross reportedly phoned NOAA acting administrator Dr. Neil Jacobs from Greece on Friday and instructed Jacobs to “fix the agency’s perceived contradiction of the president,” three people familiar with the interaction told the Times. According to the report, after Jacobs objected to Ross’s demand, he was told that NOAA’s politically appointed employees would all be fired if the situation was not rectified.

I miss the days when officials resigned on principle rather than carry out clearly wrong orders https://t.co/PSenJGxhgG

Still others quipped that they didn’t anticipate Ross making an “appearance in this episode.”

Must say I was not expecting a Wilbur Ross appearance in this episode.

Rick Hasen, a professor of Law and Political Science at UC Irvine also weighed in on Ross’s reported intervention, writing, “Trump Commerce Secretary Wilbur Ross, Who Lied About His Reason for Including A Citizenship Question on the Census, Pressured NOAA Officials on Trump Misstatement about Alabama Hurricane.”

The controversy began with Trump’s September 1, tweet which said that Alabama was “most likely to be hit much harder than anticipated.” That was corrected by the National Weather Service’s Alabama division, which tweeted: “Alabama will NOT see any impacts from [Hurricane Dorian]. We repeat, no impacts from Hurricane [Hurricane Dorian] will be felt across Alabama. The system will remain too far east.”

Despite his false assertion being publicly corrected, Trump persistently argued that his initial claim was true, even going so far as to display a National Hurricane Center map of the storm’s predicted path which had apparently been altered with a black sharpie marker to include Alabama in its trajectory.

“From Wednesday, August 28, through Monday, September 2, the information provided by NOAA and the National Hurricane Center to President Trump and the wider public demonstrated that tropical-storm-force winds from Hurricane Dorian could impact Alabama. This is clearly demonstrated in Hurricane Advisories #15 through #41,” the statement said last Friday.

“The NWS Forecaster(s) corrected any public misunderstanding in an expert and timely way, as they should,” McLean wrote. “There followed, last Friday, an unsigned press release from ‘NOAA’ that inappropriately and incorrectly contradicted the NWS forecaster. My understanding is that this intervention to contradict the forecaster was not based on science but on external factors including reputation and appearance, or simply put, political.”

A Department of Commerce spokesperson told Law&Crime on Monday that the New York Times report was not true.

“The New York Times story is false,” the spokesperson said. “Secretary Ross did not threaten to fire any NOAA staff over forecasting and public statements about Hurricane Dorian.”

Editor’s note: this story was updated after publication to add a statement from a Commerce spokesperson.