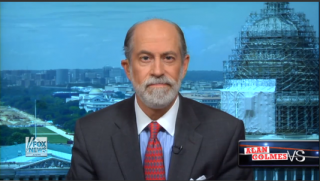 As Ted Cruz’s comments on surveilling Muslim communities have picked up steam in the media, it may be his recent appointment of Gaffney that’s the more disconcerting story. Gaffney, a former Reagan administration Pentagon official, has been accused by the Southern Poverty Law Center (SPLC) of being one of the nation’s leading Islamophobes.

One has to think, is Cruz following Gaffney’s lead? Is Gaffney the brain behind Cruz’s latest Muslim neighborhood surveillance policy? Cruz’s refusal to adopt Trump’s Muslim-ban is axiomatic, after all he is a Harvard Law graduate and a Constitution-clinger who knows such an act would be illegal, but Cruz’s Muslim-surveillance proposal is ludicrous for the same reasons, and its timing is serendipitous with Gaffney’s arrival at Cruz camp.

When Donald Trump proposed his temporary ban on Muslim-Americans entering the country in December, he referenced a 2015 survey commissioned by the Center for Security Policy, a think tank founded by Gaffney, which concluded that a quarter of U.S. Muslims supported violent jihad against the U.S. The Hill denounced the Center for Security Policy as an “extremist think tank.” As Heidi Cruz recently said, “You probably know by now that most of the things Donald Trump says have no basis in reality.” Trump is terrifying in many respects, but Cruz is arguably more so because he’s surrounding himself with people who are not only based in reality (i.e., have spent time in the White House), but believe in the abhorrent and discriminatory principles Americans are taught to deride.

While Trump owns a monopoly on headline-making extremism, it’s Cruz who has aligned himself with the xenophobic and bigoted rhetoric that has permeated the Republican party and our body politic this election cycle. Trump’s main advisor is his mirror—think Narcissus admiring his reflection. Cruz’s new advisor believes that President Obama is a Muslim. Gaffney has stated that when he met Ted Cruz in 2012, then a conservative rising star running for Senate, he informed him of the threat Sharia law posed to America and the FBI’s investigation into the Holy Land Foundation—the largest Islamic charity in the U.S.—as a Muslim Brotherhood-linked organization. “I hope that some of that went into his decision to introduce legislation to designate the Muslim Brotherhood as a terrorist organization,” Gaffney said.

In fact, Gaffney’s rhetoric is so inflammatory that he was banned by the preeminent Conservative Political Action Conference (CPAC). That’s one hell of a precedent to set. The neo-conservative vowed to boycott the event in 2011 because, Gaffney claimed, the Muslim Bortherhood had “infiltrated” its ranks. Responding to Think Progress at CPAC 2011, Gaffney warned that Grover Norquist, the anti-tax activist and influential Republican strategist, was spearheading “active measure” campaigns within the conservative establishment on behalf of the Muslim Brotherhood. “I believe the conservative movement is being subjected to a concerted Muslim Brotherhood infiltration effort,” Gaffney said.

The inane foreign-policy team employed by Ted Cruz is not specific to Gaffney either — former CIA officers Fred Fleitz and Clare Lopez and former Army Special Forces Master Sergeant Jim Hanson round out the unhinged, each also an employee of the Center for Security Policy.

Hanson defended the arrest of 14-year-old Muslim high school student Ahmed Mohamed for bringing a homemade clock to school in 2015. He claimed the controversy was an “influence operation” by the Council on American-Islamic Relations, described the clock as similar to “an Iranian-made IED trigger used to kill U.S. troops in Iraq,” and claimed it “was half a bomb.” Fleitz claims that contrary to the consensus of the U.S.’s 16 intelligence agencies — that Iran has still not made the decision to build a nuclear weapon — Iran does have nuclear weapons, saying intelligence officials “continue to deny that an Iranian nuclear weapons program exists.” And as for Lopez, she also believes Iran already has nuclear weapons and further that the Obama administration is complicit. “If Iran wanted to be nuclear, that was fine with this administration. I really think that’s their policy,” she said.

For all of Trump’s indiscretions, and there are many, Cruz is the candidate stacking his presidential campaign with anti-muslim conspiracy theorists, and for that, maybe he’s the one to fear.

We reached out to the Ted Cruz Campaign, but they were not immediately available for comment.