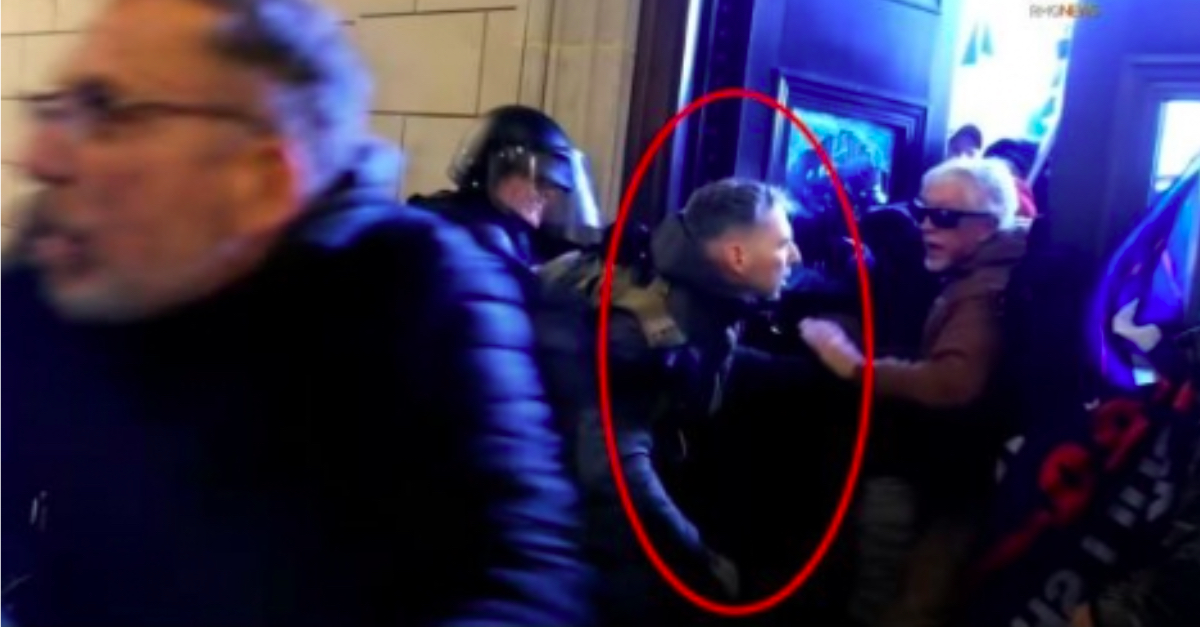 An active-duty Marine Corps officer stationed at the Quantico base in Virginia was arrested on Thursday in the commonwealth and charged with five federal crimes in connection with the Jan. 6 siege of the U.S. Capitol, including allegedly assaulting a police officer, the Department of Justice announced Thursday afternoon.

According to the charging documents, Major Christopher Warnagiris, 40, of Woodbridge, was initially captured on security camera footage “violently” entering the Capitol Building through the East Rotunda doors by pushing through a line of Capitol Police officers. Once inside the building, video and photographs show him returning to the doors and trying to thwart the officers’ efforts to prevent more rioters from getting through by physically pushing and pulling them away from their positions, prosecutors say.

During the struggle, several officers moved from outside of the doorway to the inside in an attempt to better hold off the mob trying to break through, including an officer identified as “Officer A.W.” who was trying to hold one of the swinging doors closed, prosecutors say.

“Officer A.W. tried to pull one of the doors shut as [Warnagiris] continued to try to push it further open,” the affidavit states.

Authorities say they were able to identify Warnagiris after a member of the public who had worked with him for approximately six months recognized him from photographs posted on the internet and filed a report with the FBI on March 16. Agents then traveled to Quantico where they interviewed another of Warnagiris’s co-workers, who authorities say also positively identified him as the individual in the photographs.

Warnagiris has been charged with five federal crimes, including: assaulting, resisting or impeding certain officers; obstruction of law enforcement during civil disorder; obstruction of justice; violent entry and disorderly conduct on Capitol grounds; and knowingly entering a restricted area without authority.

He was scheduled to make his initial appearance at 2 p.m. on Thursday in the U.S. District Court for the Eastern District of Virginia. The case will then be prosecuted by the U.S. Attorney’s Office for the District of Columbia and the DOJ National Security Division’s Counterterrorism Section.

Law&Crime reached out to the Marine Corps for comment on the Warnagiris case.

Marine Corps spokesman Maj. J. A. Hernandez confirmed that Warnagiris is an active-duty Marine and said the following in a statement:

The Marine Corps is clear on this: There is no place for racial hatred or extremism in the Marine Corps. Our strength is derived from the individual excellence of every Marine regardless of background. Bigotry and racial extremism run contrary to our core values.

There is a multi-layered, policy-based approach to screening new and potential Marines for aberrant thinking and behavior. One-on-one interviews are conducted between each prospective accession and the recruiter’s immediate supervisor, then the Marine Liaison at the Military Entrance Processing Site, and finally by MEPS personnel. Every tattoo an applicant may have is screened for content to ensure it is not indicative of a gang or extremist affiliation. Furthermore, upon shipping, recruits and candidates are directly observed by a team of Drill Instructors and Officers responsible for ensuring they mirror our core values before earning the title Marine.

The Marine Corps Prohibited Activities and Conduct (PAC) Prevention and Response Policy, Marine Corps Order 5354.1E was revised to align with the DOD Instruction 1020.03. The PAC order updates, consolidates, and aligns existing and newly created policy prohibiting harassment, unlawful discrimination, any type of abuse: hazing, bullying, ostracism, retaliation, wrongful distribution or broadcasting of intimate images, and certain dissident and protest activity (to include supremacist activity). All of these negative behaviors now fall under one policy known as “prohibited activities and conduct” or “PAC.”

Participation with hate or extremist groups of any kind is directly contradictory to the core values of honor, courage, and commitment that we stand for as Marines and isn’t tolerated by the Marine Corps. We are proud of the fact that Marines come from every race, creed, cultural background and walk of life. We expect every Marine to treat their fellow Marines with dignity and respect. Those who can’t value the contributions of others, regardless of background, are destructive to our culture, our warfighting ability, and have no place in our ranks.

Over the past 13 years, Warnagiris has mostly been stationed in North Carolina, Virginia, and Washington, D.C. He was stationed in Oklahoma in 2003 and 2010.

The Marines said his current assignment is in the Marine Air-Ground Task Force Staff Training Program, Training and Education Command.