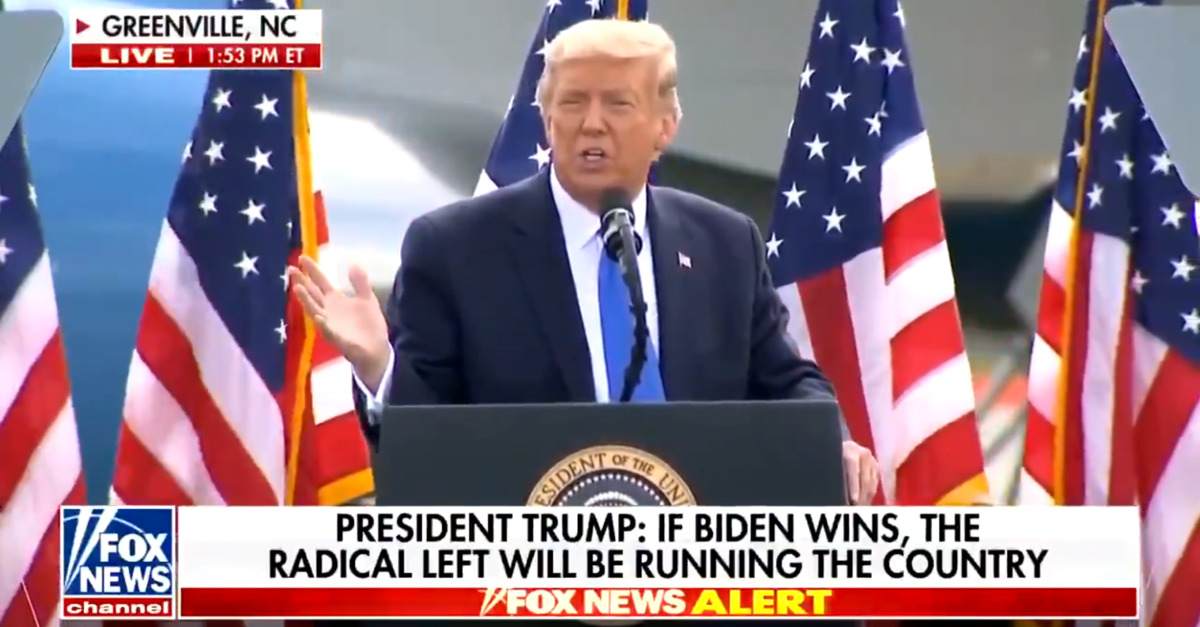 President Donald Trump boasted about the killing of Michael Forest Reinoehl during a campaign rally on Thursday. Critics and legal experts immediately condemned the speech as a glorification of political violence and an attack on the U.S. Constitution.

Trump: We sent in the US Marshals, took 15 minutes and it was over… They knew who he was, they didn’t want to arrest him and 15 minutes that ended pic.twitter.com/fJA5BsJVeF

“We sent in the U.S. Marshals, took 15 minutes and it was over,” Trump said to wild cheers. “We got him. They knew who he was, they didn’t want to arrest him and 15 minutes [sic] that ended.”

MSNBC talk show host Chris Hayes said it was obvious that the president was bragging while admitting that an extrajudicial killing had occurred.

“He’s not just admitting to an extra-judicial killing, he’s bragging about it,” he tweeted.

“I am sorry, is this this the president of the United States of America admitting to having carried out a domestic assassination?” Defending Rights & Dissent Policy Director Chip Gibbons said via Twitter. “Because that is what it sounds like…”

Reinoehl was killed in a shower of bullets fired by federal agents under mysterious circumstances in early September. He was pronounced dead on the scene in Lacey, Washington–having been wounded while still in his car before attempting to exit and then crumpling onto the ground.

All but one of the witnesses say law enforcement did not identify themselves–or even initiate communication with Reinoehl–before unleashing their first torrent of bullets.

Authorities said they did nothing wrong during the 37-bullet fusillade. They said that federal agents gave Reinoehl “commands to stop and show his hands” while they attempted to execute an arrest warrant over the alleged late August murder of Aaron “Jay” Danielson, a supporter of the far-right group Patriot Prayer.

Other discrepancies in the case have emerged as well on the matter of whether or not Reinoehl actually had a gun in his hands when he authorities opened fire. Federal agents at first claimed that Reinoehl “produced a firearm” but did not explain what that meant.

Officers then alleged that Reinoehl had a .380 pistol in his possession and pointed it at them just before he was killed. That explanation subsequently morphed slightly into the claim that Reinoehl was reaching for his gun at the time of his death. The government now says Reinoehl was attempting to “manipulate” the gun in his waistband just before his death. The various and competing claims and characterizations, thus far shrouding the full factual story of the shooting circumstances, got an unsolicited jolt on Thursday in the form of the president’s cavalier endorsement of Reinoehl’s death.

“Either he’s taking credit for something to look cool to his audience, or he’s confirming the conspiracy theories are true, and I really don’t know which way this one goes,” mused attorney and legal journalist Mike Sacks via Twitter.

“Just the President of the United States casually admitting that federal law enforcement officers intentionally violated the Fourth and Fifth Amendments,” he tweeted.

Others were worried about the general impact on the U.S. Constitution.

I think the ‘they’ here is Portland or Oregon authorities. In any event, there now seems to be some doubt around the circumstances of the shooting, which would seem like ample reason to shut up about it. It’s also DOJ business which the AG has asked president not to discuss https://t.co/tVJlwHqQik

Again, it appears Trump is referring to the state/local authorities knowing who the suspect was and being unwilling to act. I don’t see him as saying the USMS went in to kill the suspect. https://t.co/OqJjmwmbXp

But Trump’s Thursday comments were redolent of his initial response to the death of a man who described himself on social media as “100% Antifa.”

“This guy was a violent criminal,” Trump said in a mid-September interview with Fox News. “And the U.S. Marshals killed him. I will tell you something, that’s the way it has to be. There has to be retribution when you have crime like this.”

In a Sept. 4 statement released after Reinoehl was killed, Attorney General Bill Barr said the “streets of our cities are safer with this violent agitator removed.”

“[T]he actions that led to his location are an unmistakable demonstration that the United States will be governed by law, not violent mobs,” he added.