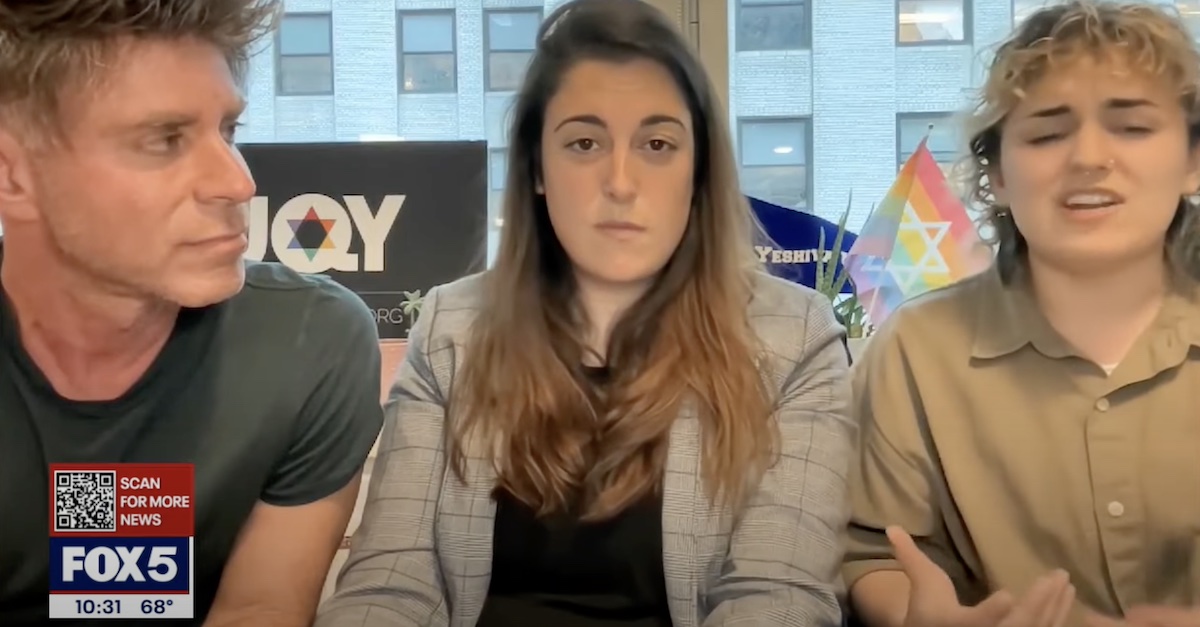 Yeshiva University students discuss the importance of an LGBTQ club on campus.

Yeshiva University in New York City has asked the Supreme Court of the United States to step in and protect it from a court order requiring the school to allow an LGBTQ club on campus on the grounds that complying would violate the school’s religious beliefs. At issue in the case is not only the scope of “religious freedom” under the First Amendment, but also the criteria for an institution being considered “religious” for legal purposes.

Yeshiva is an Orthodox Jewish private research university in New York which consists of four undergraduate schools, a law school, and a graduate school offering several programs. When undergraduate students sought to establish a “Pride Alliance” group on campus, the school refused on the basis that such a group would violate the school’s religious tenets.

A group of students and alumni filed a complaint against the school with the New York City Commission on Human Rights alleging anti-LGBTQ discrimination in violation of New York law. Yeshiva defended its actions by arguing that — as a religious institution — it was exempt from the city’s human rights law.

The case proceeded to litigation, and New York Supreme Court Justice Lynn Kotler ruled against Yeshiva on the basis that when the school was incorporated, it was not organized not as a religious institution. Kotler wrote that “Yeshiva’s organizing documents do not expressly indicate that Yeshiva has a religious purpose,” and called the school’s arguments against the club “overblown.” Kotler added that whether a school with a religious affiliation is exempt from human rights laws depends on the school’s own organizing documents. Yeshiva had a chance to declare itself a religious school, and it opted not to do so, explained Kotler.

Kotler then directed the school to allow the school’s Pride Alliance “full equal accommodations, advantages, facilities, and privileges afforded to all other student groups at Yeshiva University.”

Lawyers for the Becket Fund for Religious Liberty, representing Yeshiva, filed an emergency application with SCOTUS for a stay pending appeal on Monday.

“When secular authorities try to tell Yeshiva University that it is not religious, you know something has gone terribly wrong,” Becket VP and senior counsel Eric Baxter said in a statement on the case. “The First Amendment protects Yeshiva’s right to practice its faith. We are asking the Supreme Court to correct this obvious error.”

The emergency application was filed before Justice Sonia Sotomayor (who is the justice assigned to the Second Circuit). Petitioners are asking the high court to block Kotler’s ruling from going into effect — and more.

“Alternatively,” the filing said, “the Court should treat this application as a petition for a writ of certiorari, grant the writ, and set the appeal for immediate briefing and argument.”

The petitioner school described itself as “the world’s premier Torah-based institution of higher education,” and pointed out that “All Yeshiva undergraduate students are required to engage in intense religious studies, with many receiving up to four and a half hours of Talmud instruction each day.” Further, the school operates in a faith-based manner with separate men’s and women’s campuses, and religiously based dress and behavior codes. “Yeshiva has determined, based on consultation with its Roshei Yeshiva—who opine on Jewish law for Jews all over the world—that an official Pride Alliance club, as described by Plaintiffs and as understood by the culture at large, would be inconsistent with Yeshiva’s religious environment and Torah values,” said the school.

Yeshiva went on to quote George Washington in its argument that the case is an example of religious freedom “gone terribly wrong”:

In 1790, President George Washington wrote to the Jewish community in Newport, Rhode Island, of his wish that the “Children of the Stock of Abraham” would continue to enjoy the goodwill of their fellow citizens, such that each could “sit in safety under his own vine and figtree, and there shall be none to make him afraid.” National Archives, From George Washington to the Hebrew Congregation in Newport, Rhode Island (Aug. 18, 1790), https://perma.cc/55Q7-JZ6K. Yet when the secular authorities of New York purport to overrule the religious authorities at Yeshiva—and when the civil courts insist the First Amendment has nothing to say about the matter—something has gone terribly wrong.

Yeshiva’s petition not only asks the justices to stay the lower court’s ruling, but also asks that it overrule Employment Division v. Smith — the 1990 ruling authored by the late Justice Antonin Scalia which held that the State of Oregon could withhold employment benefits for employees who violated state drug laws by ingesting Peyote during a religious ceremony.

The justices have already granted certiorari in another somewhat similar case in which a Christian website designer claims she is being “forced” by the Colorado Anti-Discrimination Act to support same-sex marriage.

“The Torah guides everything that we do at Yeshiva—from how we educate students to how we run our dining halls to how we organize our campus,” Yeshiva University President Ari Berman said in a statement.  ”We care deeply for and welcome all our students, including our LGBTQ students, and continue to be engaged in a productive dialogue with our Rabbis, faculty and students on how we apply our Torah values to create an inclusive campus environment. We only ask the government to allow us the freedom to apply the Torah in accordance with our values.”