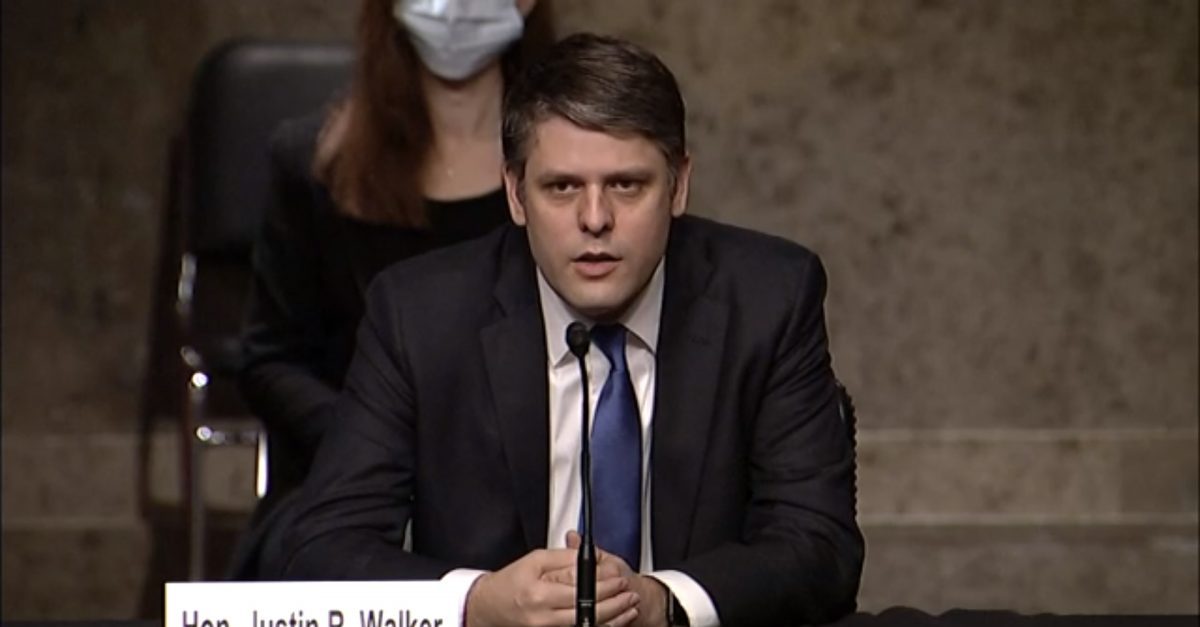 A federal appeals court in Washington, D.C., struck a blow for the First Amendment in a Tuesday opinion by a conservative judge — and noted protégé of Justice Brett Kavanaugh — appointed to two separate benches by former President Donald Trump.

U.S. Circuit Judge Justin R. Walker penned the majority opinion in the case stylized as Guffey v. Mauskopf, which concerns two women who work for the Administrative Office of the United States Courts, Lisa Guffey and Christine Smith. Specifically, the case concerns what they do during non-work hours.

In their free time, both are political activists.

“When they are away from work, they want to express support for their preferred candidates in partisan elections,” the opinion explains. “Both Guffey and Smith have engaged in partisan political activities away from the job while employed at the AO.”

Referred to throughout the opinion as the AO, the agency changed their personnel guidelines in 2018 to prohibit their employees from ever engaging in nine specific forms of political activity.

Those prohibitions are as follows:

1. Publicly expressing opinions about partisan candidates or political parties, including on social media;

3. Contributing money to a party, candidate, or political action committee;

7. Being a member of a partisan political organization;

8. Driving voters to the polls on behalf of a party or candidate; and

9. Organizing events for a partisan candidate.

In turn, Guffey and Smith sued to enjoin those new internal rules and won a partial victory. The district court temporarily enjoined the first seven rules but let the driving and organizing restrictions stand. At the summary judgment stage, the lower court more or less stuck to their earlier decision, permanently barring the AO from enforcing the first seven restrictions but maintaining the driving and organizing prohibitions for all but six high-level employees who are subject to a different set of rules.

Both the employees and the agency were left less than happy with the outcome and appealed to the U.S. Court of Appeals for the D.C. Circuit. The Biden administration also argued in favor of the speech restrictions.

“Because the First Amendment prohibits the government from ‘abridging the freedom of speech,’ the AO’s restrictions on Guffey and Smith’s off-duty political speech and activities are unconstitutional,” Walker writes in the opinion striking down all nine restrictions. “That prohibition violates the Free Speech Clause of the First Amendment.”

Walker notes that “AO employees could” engage in partisan activity “for the first 79 years of the agency’s history,” but only since 2018 has the government “forbidden” such behavior.

While allowing that the government does have “unique interests in its employees’ conduct,” the opinion finds that “the government cannot condition public employment on the complete surrender of a citizen’s First Amendment rights.”

Rather, Walker notes, the government has to show that restrictions on speech have a direct “impact on the actual operation” of the government that would outweigh the citizen’s rights to freely speak and exercise their opinions. Walker says there’s no such showing here by outlining just what AO employees actually do on the job.

• Assist judges and courthouse staff with information technology;
• Help courts connect with visiting judges and coordinate travel;
• Handle human resources and other support tasks for courts, probation offices, and federal-defender services;
• Recommend positions to the Judiciary’s internal policymaking body, the Judicial Conference, on issues like codes of conduct, court administration, and defender services;
• Issue press releases and statements on behalf of the Judiciary;
• Advise judges on reimbursements, recusals, gifts, and other ethics issues; and
• Represent the Judicial Conference before Congress and the Executive Branch.

Perhaps more instructive, however, the judge notes, is what AO employees do not do.

“AO employees do not decide cases — only judges do that,” the majority notes. “Nor do they make recommendations about the outcomes of individual cases, as law clerks and other legal advisors inside a courthouse often do.”

That distinction, the majority says, is crucial – while also noting that the agency has a “duty to uphold the Constitution.”

“The AO wants to maintain the Judiciary’s reputation for independence from politics,” Walker notes. “That is among the worthiest of goals. And no one in this case takes issue with the AO’s longstanding prohibition of political speech by its employees when they are at the office. But the AO cannot prohibit political speech by Guffey and Smith when they are away from work and in no way affiliating themselves with the Judiciary.”

But, in ruling for the plaintiffs, the majority remands the lower court to tailor their earlier blanket injunction so as to be both more inclusive and limited by encapsulating all nine prohibitions but making sure it only applies to Guffey and Smith.

“We trust that upon receipt of our judgment, [the AO] will reconsider the contested restrictions for employees whose work is comparable to (or less sensitive than) the work Guffey and Smith do,” Walker says.

In dissent, Ronald Reagan-appointed Judge Karen L. Henderson admits the AO’s restrictions “encroach” on First Amendment rights, “the other side of balance” would mean accepting the agency’s interest “in safeguarding the public perception of judicial integrity” and how it chooses to effectuate that interest.