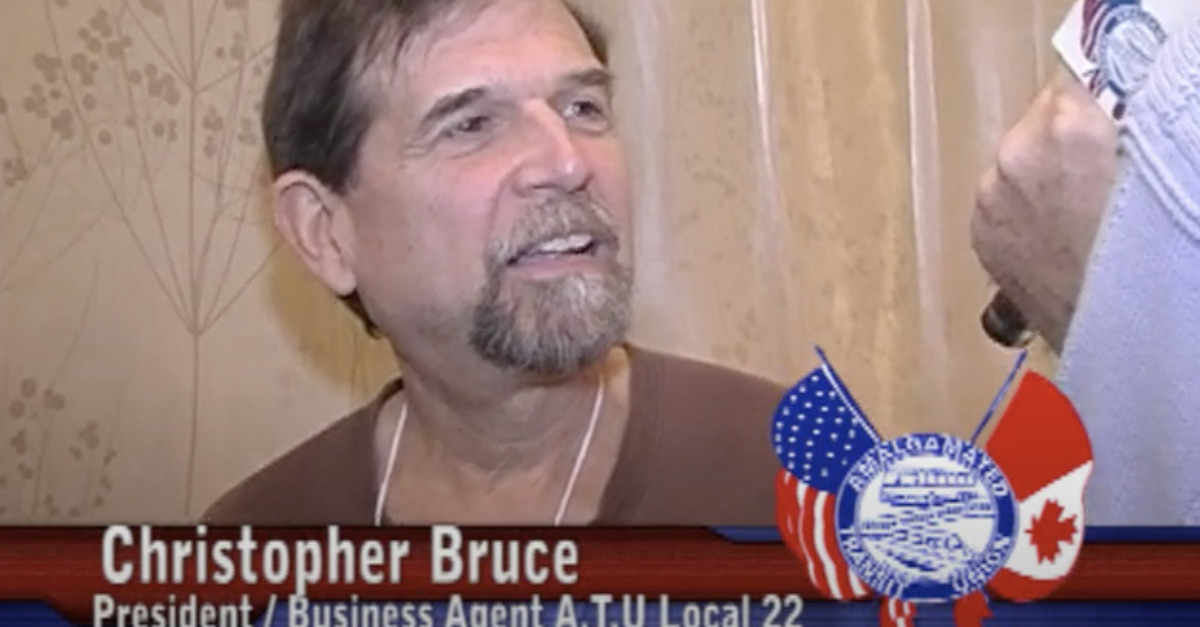 A federal appeals court has resurrected a First Amendment lawsuit brought by a fired union boss who gave a television interview to Telemundo about budget cuts within the transit department.

The U.S. Court of Appeals for the First Circuit vacated the trial court’s grant of summary judgment in favor of Worcester Regional Transit Authority (WRTA) and its contractor, Central Mass Transit Management, Inc. (CMTM), and remanded the case back to U.S. District Court Judge Timothy Hillman (a Barack Obama appointee) for further proceedings.

The civil rights plaintiff is bus driver Christopher Bruce, who claimed that his First Amendment rights under the U.S. Constitution and the Massachusetts state constitution were violated when he was fired for speaking out on a matter of public concern.

Bruce was a longtime employee of WRTA, who worked as a bus driver from 1976 to 1994. Thereafter, Bruce worked as a full-time business agent for the Local 22 union. Bruce then returned to work at WRTA, as a CMTM employee, in 2013 when he was elected president of Local 22.

After becoming union president, Bruce’s employment with CMTM was punctuated by various disciplinary incidents. He was fired by CMTM in 2015 for “disciplinary infractions, including improper cell phone use while driving and failure to follow orders.” That termination was later rescinded by agreement; in 2016, however, Bruce was demoted after being cited for further disciplinary issues. Eventually, Bruce was fired in 2017.

Bruce wished to return to work, and with the help of a union representative, he entered into what was called a “last chance agreement” with CMTM on March 30, 2017. Under the last chance agreement, the time during which Bruce had been fired would be converted to an unpaid suspension, and he would be on a two-year probationary period during which any disciplinary infractions would trigger his immediate termination. The agreement also provided that Bruce would waive all claims against CMTM for past or future disciplinary action.

It wasn’t long, however, before Bruce again faced disciplinary action. In January 2018, he was investigated for leaving the scene of an accident.

The same month, the State of Massachusetts announced impending budget cuts on CMTM. Bruce spoke publicly about those budget cuts. Specifically, he gave a newspaper interview with a local news outlet in February 2018 while he was on duty.

After the interview aired on Telemundo, Bruce was notified that he was being investigated for “making unauthorized statements to the media, for a willful or deliberate violation of or disregard of safety rules or common safety practice, and for a failure to follow work orders.”

Bruce sued his employer, claiming that his public statements amounted to private speech protected by the First Amendment, and that his firing was a violation of his civil rights. The district court sided with the government defendants, and granted their motion for summary judgment, ending Bruce’s lawsuit.

Bruce appealed to the First Circuit and the case was heard by a three-judge panel which included Chief Circuit Judge David Barron and Circuit Judge Ojetta Rogeriee Thompson (both Obama appointees) and Circuit Judge Jeffrey Howard, a George W. Bush appointee. On appeal, the panel reversed and ruled in Bruce’s favor, thus giving his lawsuit another chance at proceeding to trial.

The panel accepted Bruce’s argument that his interview was legally protected, because he was speaking as a citizen on “a matter of public concern.” The court agreed that despite the Telemundo interview occurring during work hours, a reasonable jury could have determined that Bruce had been speaking “as a citizen,” rather than pursuant to his official duties.

Chief Judge Barron penned the 31-page opinion for the court and elaborated on what a hypothetical reasonable juror might find:

Such a juror also could find on this record that Bruce’s speech did not derive from any special knowledge that he had gained as a public employee but was based instead on the common-sense premise (or, at most, a premise that he could have learned as a union official) that cuts to WRTA’s budget would impact WRTA service.

Moreover, a reasonable juror could find on this record that Bruce’s statements to Telemundo were essentially the same as ones that a typical WRTA rider could have made, which would support the determination that there is a citizen analogue to the speech at issue.

The court also found that Bruce may have been fired not for the content of his statements to media, but rather, for violating his employer’s general policy requiring preauthorization of all public statements.

Turning to the matter of the last chance agreement, the court found that there is no “‘magic words’ test” to determine whether it would operate as an effective waiver of Bruce’s claims. Rather, the district court must now engage in a thorough analysis to determine whether Bruce waived his right to make a § 1983 claim for deprivation of
First Amendment rights.

Although the appellate court remanded the issue of waiver back to the trial court, it did so with some heavy-handed guidance. Barron pointed out that his panel is unaware of any case in which the First Circuit has permitted a waiver of a First Amendment claim in the employment context.

The First Circuit’s ruling, while critical to Bruce’s case, does not mean that the bus driver will ultimately prevail in his lawsuit. Rather, it merely allows the case to proceed toward fact-finding — or perhaps toward settlement.