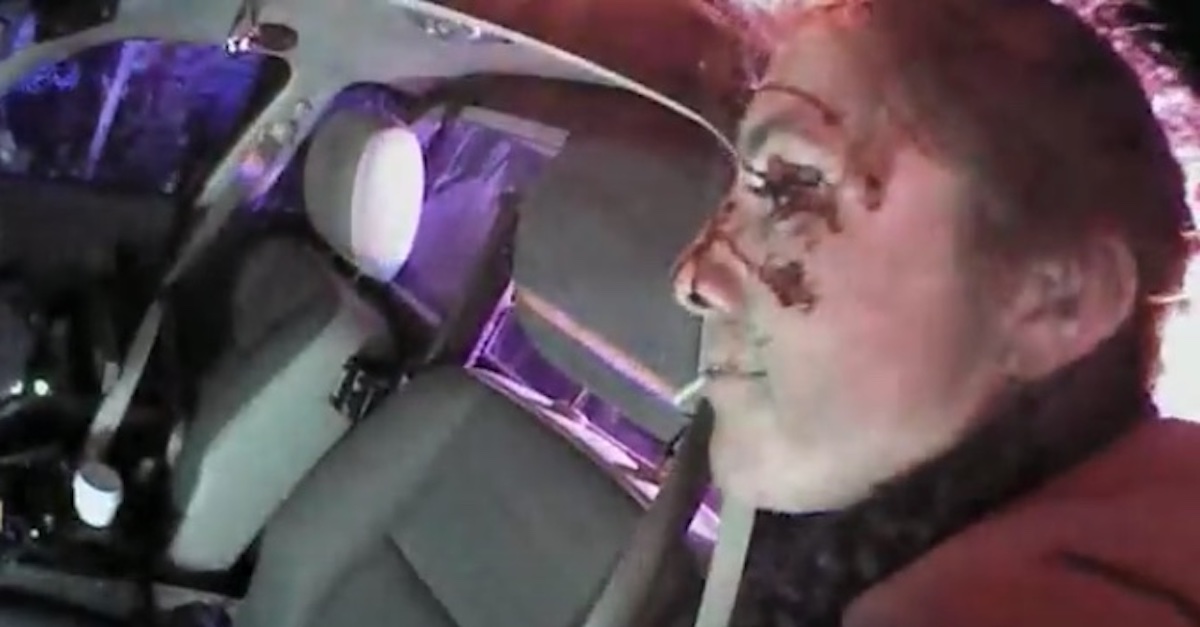 Gabbi Lemos pictured during an altercation with Sonoma County law enforcement in 2015.

A federal appeals court has reversed an earlier panel decision barring a California woman from pursuing her excessive force claim against a sheriff’s deputy stemming from a 2015 altercation caught on camera.

Gabbi Lemos, 25, was arrested outside a high school graduation party in June of 2015, following an altercation involving her, some family members, and Sonoma County Sheriff’s Deputy Marcus Holton.

Holton, who was on his routine patrol at the time, had stopped after seeing a pickup truck blocking a lane of traffic and hearing screaming, according to court documents. Holton activated his body-worn camera and began investigating what he believed at the time was a domestic dispute involving Lemos, her sister Karli Labruzzi, and her Labruzzi’s boyfriend Darien Balestrini. Labruzzi and Balestrini were in the truck, and as Holton approached so did Lemos, her mother, and a different sister.

At one point, when Holton opened the door of the truck to see whether Labruzzi had any weapons or injuries, Lemos stepped between Holton and her sister, telling him that he wasn’t allowed to do that. Things escalated, and Holton eventually arrested Lemos, forcing the 18-year-old high school graduate — who at the time weighed 105 pounds and stood five feet tall — to the ground, pinning her down.

Lemos sustained injuries to her face and claimed she incurred “thousands of dollars in medical expenses” as a result.

In November of 2015, Lemos sued the County of Sonoma, Sheriff Steve Freitas, and Holton for civil rights violations, known as 1983 claims because of the federal statute that provides a civil cause of action of deprivation of rights.

Sonoma County, simultaneously, pursued criminal charges against Lemos. The district court paused Lemos’ civil case, and in 2016 a jury convicted her of willfully resisting, delaying, or obstructing Holton, a misdemeanor.

The conclusion of Lemos’ criminal case reignited her federal civil case, but the district court dismissed on the basis of a legal theory that bars plaintiffs from suing law enforcement for civil rights violations if that plaintiff was also convicted of a crime for the same incident. The underlying idea of that theory, based on the 1994 Supreme Court decision in Heck v. Humphrey, is that a win for the plaintiff in a civil case would invalidate a criminal conviction, which presumably concluded that law enforcement’s action in the incident was legal.

A three-judge panel on the Ninth Circuit upheld the lower court in a 2-1 ruling in 2021.

Miller, a Donald Trump appointee writing on behalf of judges appointed by Trump, Bill Clinton, and Barack Obama, said that in this case, the details mattered — particularly the details of the jury instructions in Lemos’ criminal case.

[C]rucially, the jury was told that it could find Lemos guilty based on any one of four acts she committed during the course of her interaction with Holton. Because the jury returned a general verdict, we do not know which act it thought constituted an offense. Although any one of the four acts could be the basis for the guilty verdict, Lemos’s section 1983 action is based on an allegation that Holton used excessive force during only the last one; at oral argument, Lemos expressly stated that she understood that act to refer to her pulling away from Holton just before he tackled her, and she disavowed any claim based on force used by Holton earlier in their encounter. There would be no contradiction in concluding (as the criminal jury may have) that Lemos obstructed Holton during the lawful performance of his duties by, say, blocking him from opening the truck door while also concluding (as Lemos alleges in this action) that Holton used excessive force when he tackled her five minutes later. Thus, if Lemos were to prevail in her civil action, it would not necessarily mean that her conviction was invalid. The action is therefore not barred by Heck.

In other words, according to the opinion, a law enforcement officer’s behavior can be lawful at one time and unlawful at another time over the course of an entire encounter.

“Under the instructions, an officer could have been lawfully performing his duties at time A even if, at some later time B, he used excessive force,” Miller wrote. “So if the jury found that Lemos resisted Holton at the truck and that Holton was acting lawfully at the time, it should have found her guilty, even if it also believed that Holton used excessive force when he tackled her five minutes later. Lemos’s success in the section 1983 action thus would not necessarily contradict the verdict.”

The ruling remanded the case back down to the district court.

“Like a wolf in sheep’s clothing, the majority opinion may appear at first blush to simply dispense with the Heck preclusion doctrine due to the unique factual scenario presented, but something more troubling lingers beneath the surface,” wrote U.S. Circuit Judge Consuelo Callahan, a George W. Bush appointee, who was joined by U.S. Circuit Judge Kenneth Lee, a Trump appointee. “The majority’s reasoning presupposes that an uninterrupted interaction with no temporal or spatial break between a § 1983 plaintiff’s unlawful conduct and an officer’s alleged excessive force can be broken down into distinct isolated events to avoid the application of the Heck bar. In this way, the decision creates an escape hatch to Heck.”

Lemos’ lawyer said that his client’s win in the Ninth Circuit is a boon for civil rights plaintiffs across the board.

“The decision is an enormous procedural victory for civil rights litigants,” Lemos’ attorney Izaak Schwaiger said in a statement emailed to Law&Crime. “For years law enforcement has known that a criminal conviction for resisting will oftentimes preclude civil liability. Thus whenever an officer uses excessive force, it has become standard practice to arrest the victim of that force for resisting arrest.”

Schwaiger echoed the majority’s take that an officer’s behavior can be lawful at one time during an incident, but unlawful at another.

“Yesterday’s decision significantly narrows the applicability of Heck preclusion in such scenarios, and recognizes the factual reality that while a suspect may be criminally liable for resisting, it does not necessarily follow that everything the arresting officer did during the encounter was lawful,” Schwaiger said. “The Ninth Circuit’s sensible approach to the issue opens many doors for victims of police abuse that were previously closed tight.”

Representatives for the city of Sonoma did not immediately respond to Law&Crime’s request for comment.

You can watch the video of the incident, via the Sonoma County Sheriff’s Office, here:

The Ninth Circuit opinion is below: