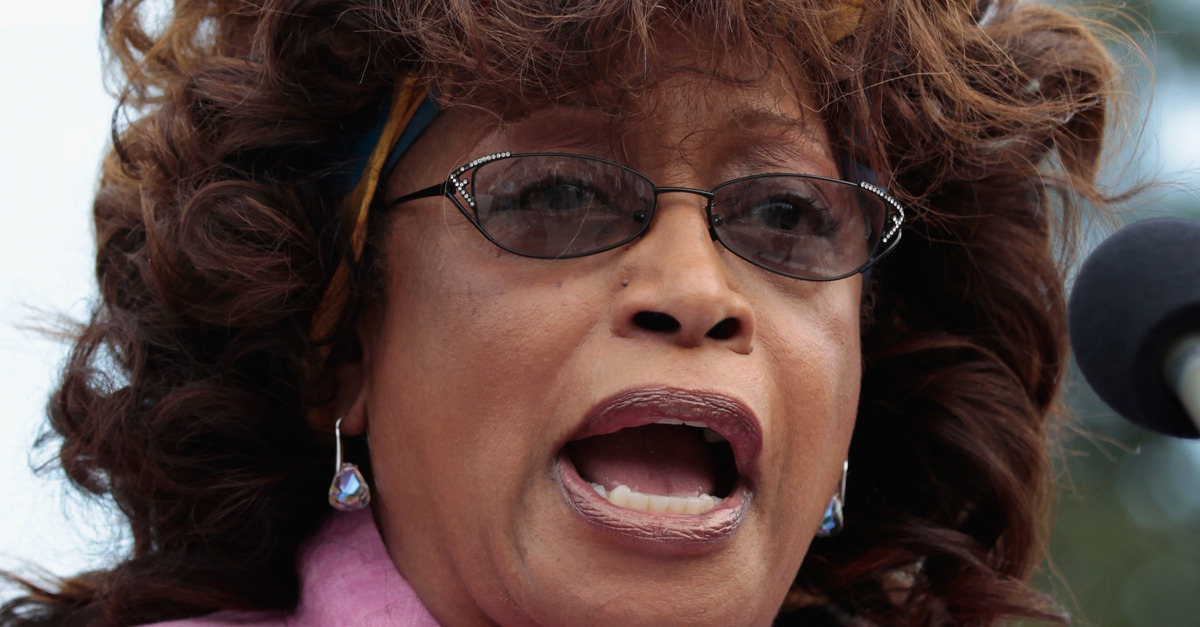 Former Florida Democratic Congresswoman Corrine Brown was convicted for her alleged role a scheme to solicit more than $800,000 in donations to a fraudulent education charity and then using the money for what the Department of Justice called “a personal slush fund.” Now, she’s getting a whole new trial courtesy of the 11th Circuit Court of Appeals and a juror who declared that the Holy Spirit told him Brown was not guilty.

After Brown’s trial and during jury deliberations, Juror 8 called the courtroom deputy to express concerns that a fellow juror, Juror 13, was making comments about a “higher power.” According to Juror 8, several of the jurors were concerned about these statements. The next day, the trial judge met with Juror 8, who then shared a letter explaining her concerns.

That letter read as follows:

With all due respect, I’m a little concerned about a statement made by Juror #13 when we began deliberation. He said “A Higher Being told me Corrine Brown was Not Guilty on all charges”. He later went on to say he “trusted the Holy Ghost”. We all asked that he base his verdict on the evidence provided, the testimony of the witnesses and the laws of the United States court. Other members of the Jury share my concern.

Following receipt of the letter, the trial judge then questioned Juror 13 at length. According to court documents, “the judge began by ‘repeat[ing] the question’ about religious beliefs that impede jury service ‘that [the magistrate judge] asked during voir dire.'” Juror 13 responded that he would be able to base his decision on the law and the evidence without any difficulty.

Despite Juror 13’s assurances, the trial court judge dismissed him on the grounds that although the “district judge was ‘sure’ that the juror ‘believe[d] that he [was] rendering proper jury service,’ the “juror ‘expressed views and h[eld] views’ that were, according to the judge, ‘by definition’ ‘inconsistent with his sworn duty as a juror.'”

In a lengthy opinion, the 11th Circuit reviewed the trial judge’s ruling and found that Juror 13’s statements should not have disqualified him from jury service. According to the court, Juror 13 “never gave any indication that he refused to follow the court’s instructions.”

The majority opinion was written by Chief Judge William Pryor, a George W. Bush appointee. Writing for the court’s majority, Pryor reasoned that unless Juror 13’s religious statements “amounted to proof beyond a reasonable doubt that he could not render a verdict based solely on the evidence and the law,” it was improper to disqualify him as a juror. Finding that Juror 13’s statements were not enough to conclusively prove he intended to disregard the law or evidence, the court ruled that the trial judge had abused his discretion by excluding the juror from service.

True, Juror No. 13 reportedly said that he “trusted the Holy Ghost” a few hours after he said that the Holy Spirit “told” him of Brown’s across-the-board innocence. But Juror No. 8 reported that the other jurors asked Juror No. 13 to base his verdict on the evidence and the law. She never said that Juror No. 13 refused that request or was otherwise obstinate.

Pryor continued, explaining that the trial judge had been unjustly skeptical on the relevance of  Juror 13’s professed religious beliefs.

Jurors may pray for and believe they have received divine guidance as they determine another person’s innocence or guilt, a profound civic duty but a daunting task to say the least.  Prayer is “a part of the personal decision-making process of many people, a process that is employed when serving on a jury.”

The district judge was wrong to conclude that Juror No. 13’s statements that he received guidance in response to prayers were categorically “a bridge too far.”

The appellate judge continued by explaining that many religious believers conduct themselves in accordance with the inner voice of God. Providing Reverend Dr. Martin Luther King, Jr., M.K. Gandhi, and Thomas à Kempis as examples, Pryor explained that Juror 13’s references to the Holy Spirit’s communications were “no more disqualifying . . . than a secular juror’s statement that his conscience or gut ‘told’ him the same.”

The 11th Circuit vacated Brown’s conviction and remanded the case for a new trial.

Four judges dissented. Circuit Judge Charles R. Wilson wrote that the district court judge was in the best position to judge the tone, inflection, and demeanor of a juror — while the appellate court could only look to a cold transcript.

“District judges walk a tightrope when deciding whether to remove a juror mid-deliberations,” Wilson argued.

He concluded (in dissent) that the record provided reasonable reasons to support the decision to disqualify Juror 13 — and that the trial judge’s ruling was within his discretion.

US v Corrine Brown – 11th Circuit by Law&Crime on Scribd