After Ex-Rep. Fortenberry’s Conviction for Lying to FBI, His Attorney Lawyers Up to Fight Judge’s Sanctions Threat 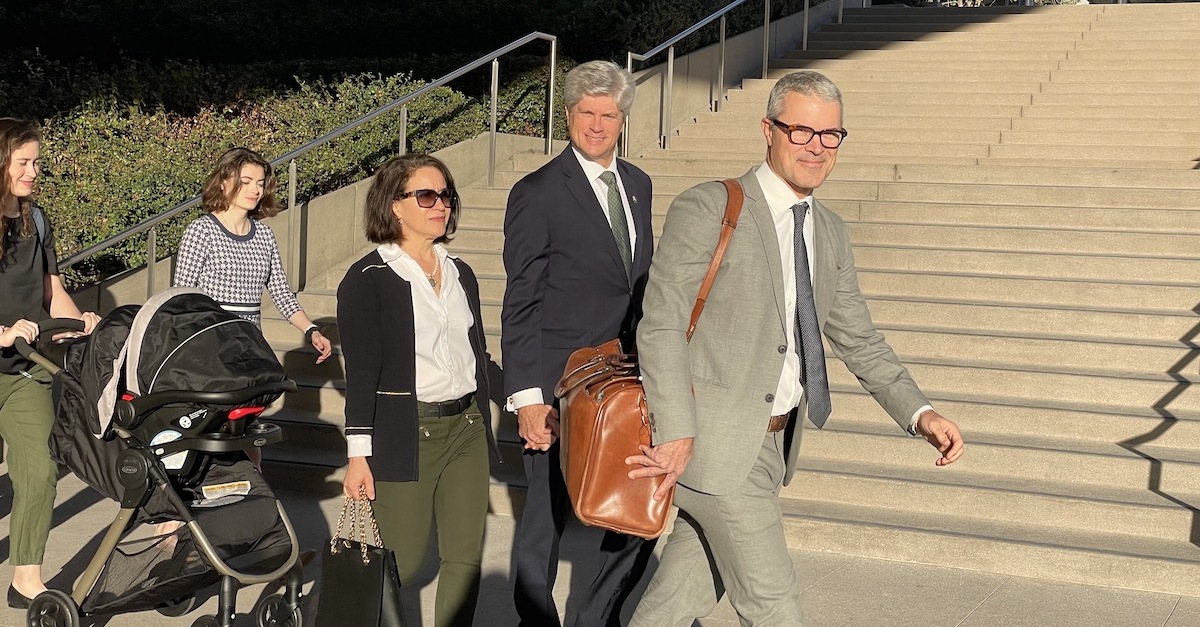 A lawyer whose congressman client was convicted of lying to federal agents about illegal campaign donations now has his own lawyer as he tries to avoid punishment for what the trial judge described as “improper” comments in his closing argument.

Attorney John Littrell is facing possible sanctions and a referral to the federal court’s discipline committee for commenting on now-ex-Nebraska GOP U.S. Rep. Jeff Fortenberry’s decision not to testify in the March trial in U.S. District Court in Los Angeles, which ended with a jury convicting him on all three counts.

U.S. District Judge Stanley Blumenfeld Jr. took issue with the comments shortly after Littrell made them on March 24, but he waited until after he sentenced Fortenberry to probation to formally notify Littrell of possible punishment.

Now, Littrell has a lawyer of his own who’s arguing the judge should back off, and warning that while the court “has inherent authority to manage the proceedings before it, it must take care not to use that authority in a way that unreasonably chills advocacy by defense counsel.”

“Mr. Littrell’s closing argument cannot be characterized as the type of ‘illegal conduct’ the inherent power is intended to deter,” Attorney Guy Iverson of Santa Barbara wrote in a July 25 filing. “And sanctioning Mr. Littrell based on a brief statement in closing argument creates a substantial risk of chilling effective advocacy by the defense bar in future cases.”

Iverson is trying to persuade Blumenfeld to vacate a July 5 order that demands Littrell show why he shouldn’t be sanctioned or referred for discipline. His motion to vacate includes a declaration from Littrell that said he’s never been disciplined or censured but previously cited his clients’ decision not to testify in several closing arguments.

“The theme of my comments has generally been to emphasize that the decision to testify cannot be considered by the jury, but also to acknowledge the difficulty jurors may have in following that instruction, and to try to place the decision not to testify in context of the risks it places on the defendant,” according to Littrell’s declaration. “I do not believe any prosecutor has objected to those remarks until this case.”

In a trial in 2010, Littrell said U.S District Judge Philip Gutierrez called “improper” comments he made in his closing argument that his client’s testimony was unnecessary and risky given the evidence.

“Although there was no objection, Judge Gutierrez pointed out after the closing that he thought my argument about what I told my client was improper. I agree. He was right,” Littrell wrote.

However, “I was not thinking about Judge Gutierrez’s comments as I was preparing my closing argument in this case,” Littrell continued. “I did not write out a script. I rarely do. One risk of speaking without notes is that I may make an argument that is imprecise or poorly worded. That is what happened here. In hindsight, I see that my comments were inartful and capable of being interpreted as arguing facts not in the record.”

Blumenfeld sustained a prosecutor’s objection during Littrell’s closing argument. He pressed Littrell about it outside the jury, asking him to “provide the court with your authority for the propriety of actually commenting upon a decision not testify.”

Littrell told the judge he “certainly didn’t” mean anything wrong but knows jurors “have a real problem with” defendants not testifying.

“Jurors really struggle with that, so I feel some obligation to say something about it. If I’ve gone too far…I certainly apologize,” Littrell said. He also said it was “fair comment” and that “reasonable minds can disagree about that.”

Blumenfeld quoted that in July 5 order, writing, “It is difficult to imagine how Mr. Littrell could believe that it was “fair” to introduce facts that were not presented at trial and subject to cross examination—particularly these facts.”

“Because of the seriousness of this issue and Mr. Littrell’s response to it, the Court does not believe that it can let this matter stand without taking any action,” Blumenfeld wrote. “Mr. Littrell is an experienced lawyer who gave substantial thought before making the argument about his client’s decision not to testify.”

Iverson on July 12 asked for more time to respond to the threat of sanctions or a disciplinary referral, writing, “Given the serious consequences of either of those two events happening, Mr. Littrell retained me to represent him.”

Iverson’s July 25 motion said Littrell acted in good faith and that “what constitutes permissible argument is not subject to a rigid metric of analysis as in other areas of the law.”

“Once there was an objection, Mr. Littrell was on notice. Once that objection was sustained, he moved on. Had he continued to argue the point in violation of the Court’s ruling he may have entered the area warranting sanctions. He did not,” Iverson wrote.

A Donald Trump appointee, Blumenfeld joined the Central District of California bench in September 2020. On June 28, he sentenced Fortenberry to two years probation for one count of scheming to falsify and conceal material facts and two counts of making false statements to federal investigators, bucking prosecutors’ recommended six months in prison. The jury deliberated 2.5 hours before convicting him on March 24. Fortenberry is appealing his convictions and his sentence to the U.S. Circuit Court of Appeals for the Ninth Circuit.

Here’s what Littrell told the jury in his closing, as quoted in Blumenfeld’s order.

“So . . . the Court instructed you, rightfully so, that you cannot consider the fact that the Congressman didn’t testify. He has an absolute right not to testify and you cannot consider it, but that’s a hard instruction to follow, especially in a case where we’re talking about what’s in his mind, what he knew, what he remembered, and what he understood. And we don’t have to explain the decision not to testify, but I’m going to. And the answer is that he did testify. Remember, most of what we listened to during our, I think, six days of trial were his statements. And the testimony, essentially, that he gave in those recordings was unvarnished, unprepared, uncounseled. Well, I suppose in D.C. he told the prosecutors what he knew and remembered, and you got to hear that, too. I can’t improve on that. I can’t—his memory is not better today than it was in 2019, so there’s really nothing to add. And so here you are, some of you may be thinking, why didn’t he testify?
Why didn’t he explain this? But what do you think would have happened if he got up there on the stand and tried to explain and his memory is worse than it was before and the Government confronts him with the call and asks him to explain it? He would say the same thing as what he said before, this is what I heard, this is what I understood.”

A licensed attorney in California since December 2002, Littrell spent 12 years a deputy federal defender before joining Bienert Katzman Littrell Williams LLP in San Clemente, California, in 2017. He represented Fortenberry with Ryan Fraser, also a partner at Bienert Katzman, and Glen Summers, a partner at Bartlit Beck in Denver, Colorado, who was a groomsman in Texas Republican Sen. Ted Cruz’s wedding. Summers is representing him in the appeal, as is Kannon Shanmugam, a prominent appellate attorney with Paul, Weiss, Rifkind, Wharton and Garrison LLP.