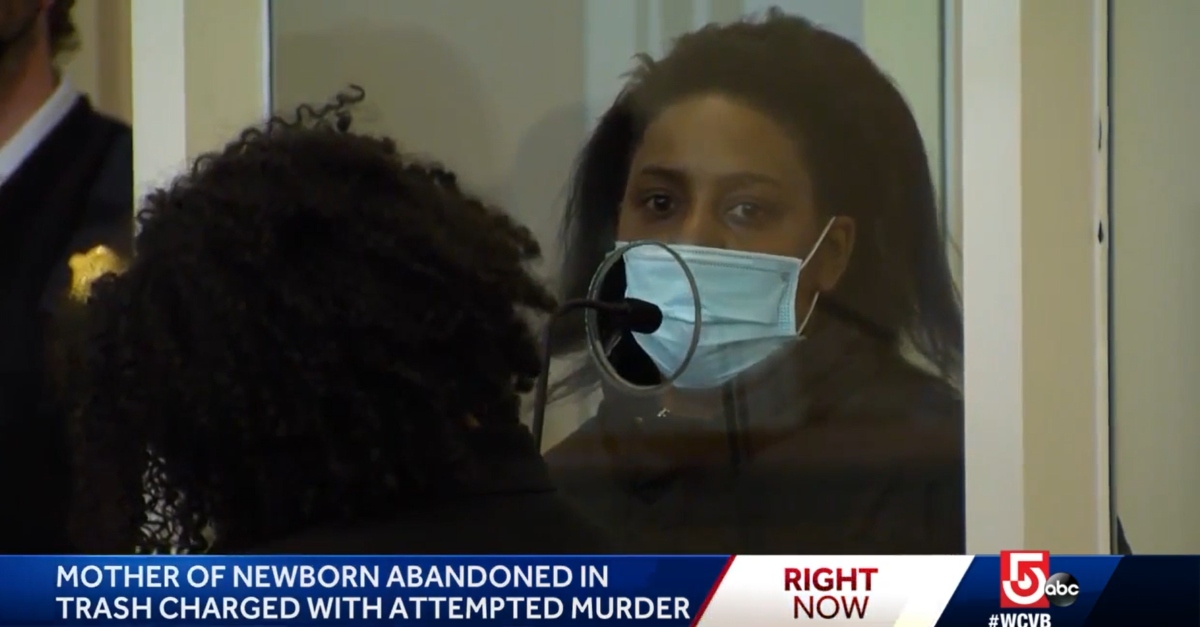 A woman in Boston, Massachusetts allegedly dumped her newborn son in a street-side trash can after giving birth to him in an acquaintance’s bathroom. Marie Merisier, 33, was arraigned Monday for charges including attempted murder, according to WCVB.

This case stems from the discovery of the infant on Friday afternoon. Local woman Silvana Sanchez said she could hear the sound of crying coming from the trash can. She found nearby EMS, who checked it out.

“He grabbed a grocery bag out of the trash can,” Sanchez said. “Two other EMTs came over, cut the bag open, it was a newborn baby found inside of it.”

The boy is said to be in good care with the Massachusetts Department of Children and Families. Suffolk County District Attorney Rachael Rollins said she checked on the baby on Saturday, saying she was glad to find “nurses pampering, spoiling, and singing to, feeding and generally pouring love and affection into this beautiful child.”

She highlighted the state’s Safe Haven Act, which lets parents legally give up newborn babies who are up to seven days old at any hospital, police station, or fire station.

The newborn’s mother is in a different kind of care. The judge set bond at $100,000 in her arraignment on Monday. The defendant is charged with endangerment of a child in addition to attempted murder. Prosecutors said that a pregnant Merisier had been at the apartment of a 73-year-old acquaintance to cook and clean.

She allegedly went to his bathroom for an hour. The acquaintance said he heard a baby crying. In this account, she stepped out of the bathroom holding a brown leather bag. The man heard cries coming from inside the bag. He said he could call an ambulance. Merisier said no, and left. The man called 911 anyway.

The trash can in question was about 200 feet from his apartment on Dorchester Avenue. Merisier initially denied putting the newborn in the barrel, but changed her story, saying she believed the child was dead, prosecutors said.

Her public defender Cristina Rodrigues construed this as a case of desperation, and mental health challenges. She argued for her client, who was laid off from restaurant work at the beginning of the COVID-19 pandemic, to be released on personal cognizance under house arrest and GPS monitoring, so the defendant so can have access to mental health treatment and evaluation in regard to pregnancy.

“This case involves an impossible, complicated set of questions about mental health, pre-partum and post-partum, hormonal, emotional and mental health crises,” the attorney said during arraignment.

The judge sided with the prosecution, who said that the defendant, a Milton, Massachusetts resident originally from Haiti, had no local ties.