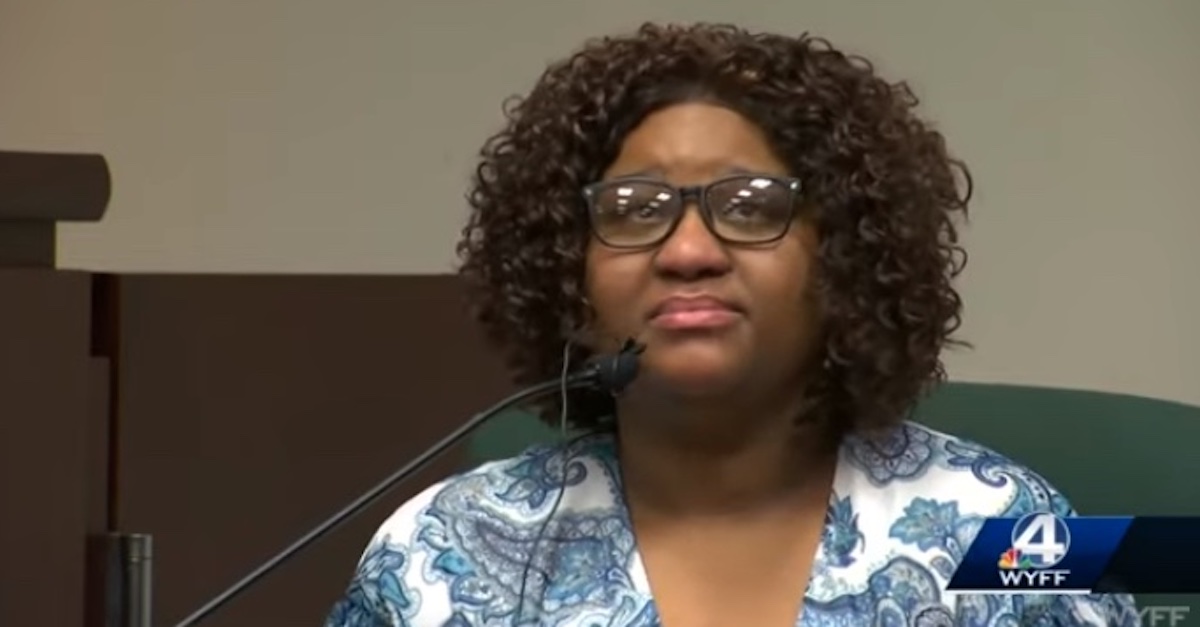 Ariel Robinson takes the stand in the murder trial of her foster daughter Victoria Rose Smith, 3 (image via screengrab/WYFF)

A former winner of a reality TV cooking show has been sentenced to life in prison for murdering her 3-year-old foster daughter.

Ariel Robinson, 30, was convicted Thursday by a South Carolina jury of homicide by child abuse in the death of Victoria Rose Smith, 3.

Robinson’s husband, Jerry Robinson, who also goes by the name Austin, was the person who called 911. He was also charged in Victoria’s death and pleaded guilty to homicide by child abuse in April.

He has not yet been sentenced, according to The Greenville News.

According to courtroom video from local NBC affiliate WYFF, Ariel Robinson appeared unmoved as the verdict was read on Thursday.

Robinson’s attorney, Bill Bouton, asked for each member of the jury to be polled to confirm the verdict. As this happened, Robinson appeared to have pursed her lips slightly, but showed no other emotion.

Judge Letitia H. Verdin issued the life sentence to Robinson after the guilty verdict was read.

According to the Greenville News report, surveillance video showed Victoria alive on Jan. 13, the day before she died, in church, wearing only undergarments as she exited the building.

At trial, Robinson said that they were running around 15 minutes late to the Life Restoration Center and were rushing to get Victoria inside. She said the reason why Victoria was not dressed is because she was eating a snack in the car on the way to church, and threw up when they got into the building.

“[Ariel] could’ve wrapped that baby up in a coat,” Vickie Phares, a family member of Victoria, said after the verdict, according to the Greenville News. “Seeing [Ariel] yank [Victoria] through the door just about undid me.”

Robinson reportedly testified that it was her idea to adopt Victoria and her two siblings, adding that Victoria didn’t have any behavioral issues.

“She was my mini me,” Robinson said when she took the stand in her own defense. “She used to talk like me, act like me. She wanted to be everywhere I went.”

As Law&Crime previously reported, Robinson was the winner of the 20th season of the Food Network show Worst Cooks in America, which aired in February of 2020. The Food Network has since pulled that season from circulation.

Robinson apparently adopted Victoria and her two siblings after winning the $25,000 prize on the Food Network show. She had previously been a middle school teacher, but the South Carolina State Board of Education suspended her teaching license following her arrest.