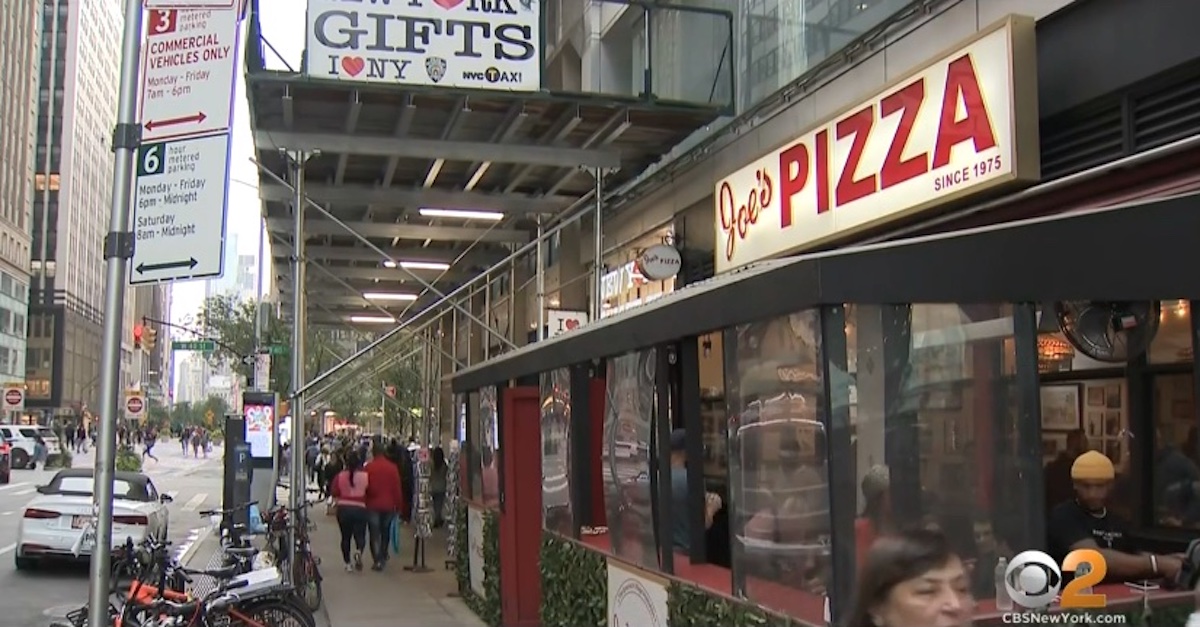 A homeless man in New York faces a second-degree murder charge after allegedly knocking a woman to the ground near a pizzeria in Times Square with such force that she suffered a traumatic brain injury that turned out to be fatal.

Jermaine Foster, 26, had allegedly just stolen a cellphone from someone and was being chased through Times Square on Friday, according to the NYPD.

The incident happened shortly before 1:30 p.m.

“[O]fficers determined that an individual snatched cellphone from a 29-year-old female in front of 1435 Broadway,” the NYPD said in a statement. “As the individual fled that location, he pushed a 58-year-old female Asian to the ground causing her to hit her head on the pavement.”

Foster was apprehended and arrested at the scene, according to the NYPD.

“She was just here. I mean, it’s really devastating. I have no words. I just wanted to cry,” Ambrocio’s brother Carlito Sta Maria said, according to a report by local CBS station WCBS.

The death of oncology nurse Maria Ambrocio is sending shockwaves throughout our area. https://t.co/FFM7CfXVIA

Again & again, we are seeing the deterioration of our City—& we cannot allow this to continue. The tragic death of Maria Ambrocio is the failure of our entire public safety eco-system, including the failure to identify dangerous people & get them off the street & into facilities. https://t.co/0lfPRgLZP2

“Heartbroken,” Sta Maria also said. “Yes, and I’m angry. I’m angry for that person who did this to my sister. We want justice.”

Ambrocio was married, and had four stepchildren and several grandchildren, WCBS reported.

Foster is facing charges of both murder and robbery, along with burglary charges from a separate incident on Friday, in which Foster allegedly broke into a woman’s apartment and demanded money, the New York Times reported.

Ambrocio was a frontline nurse who had just visited the Philippine Consulate General when Foster knocked her over, the consulate said in a statement on Facebook.

“The incident is the latest in the series of violent acts committed by mentally-ill individuals against members of the Filipino Community in New York City since the start of the year,” the statement said. “Beginning January, we have seen several of our kababayan, most of them senior citizens, violently assaulted by individuals with mental health issues.”

We grieve with the family of our kababayan Maria Ambrocio, a health frontliner, who died from her injuries after she was knocked down by a homeless man near @PHinNewYork on Friday. We call on authorities to do what is necessary to make the streets safer. https://t.co/Yp5XYlwbOC

“Kababayan” is a Tagalog word for a fellow Filipino, or compatriot.

The consulate’s statement also called for “heightened police visibility” and “for authorities to take the necessary measures to address mental health issues, especially among the homeless,” before asking: “How many Maria Ambrocios do we have to mourn before the streets would be made safe again?”

Meanwhile, Ambrocio is being remembered by colleagues as a caring oncology nurse who was passionate about her work.

“She spent 25 years as an oncology nurse in Bayonne Medical Center, and her untimely death is a profound loss to us all, especially those whose lives she touched each day,” CarePoint Health CEO Achintya Moulick said in a statement, according to WCBS. “Maria gave so much of her life to her community and patients, including her incredible sacrifices during the pandemic … We will miss her very much.”

Foster had previously been charged with forcible touching after groping a 30-year-old woman in Times Square, the Times reported. Prosecutors asked for bail to be set at $3,000, but a judge released Foster instead, according to the Times.

New York Department of Corrections records show that Foster, identified as a native of Jamaica, is currently being held without bail.

Foster’s next court appearance is scheduled for Thursday, according to court records.