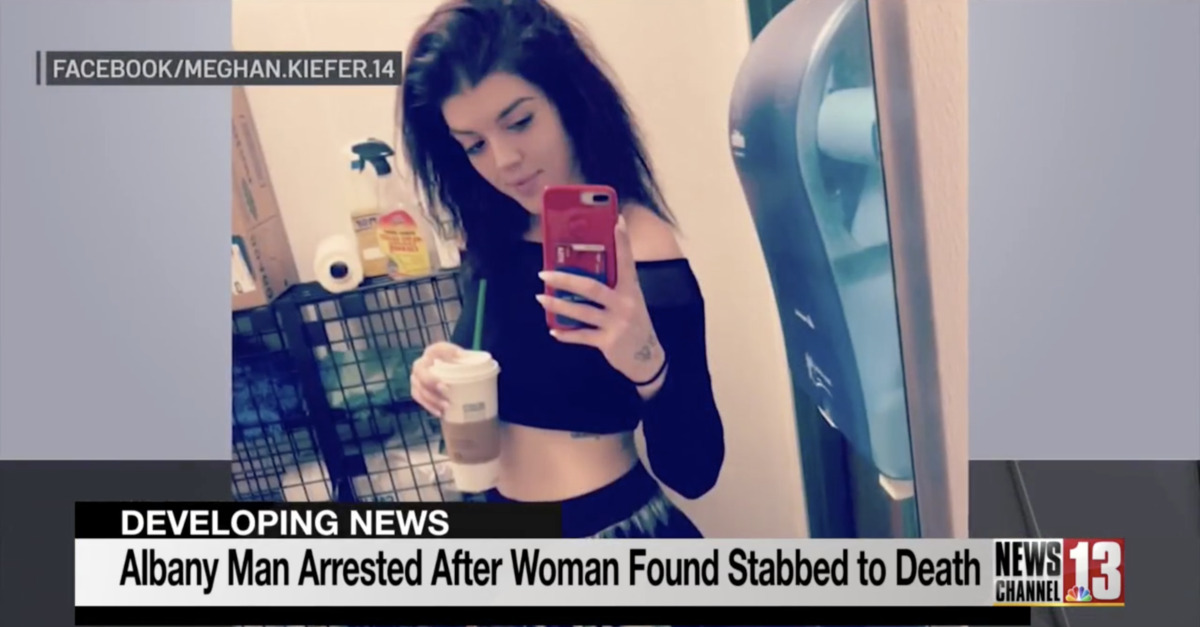 An Upstate New York man was charged on Monday in connection with the three-dozen-plus-times stabbing death of his ex-girlfriend.

Kason Parker, 33, stands accused of murder in the second degree over the death of 27-year-old Meghan Kiefer. The defendant hails from Albany, N.Y.; the slaying occurred more than three hours away in Coram, N.Y. on Long Island east of New York City.

According to New York City CBS affiliate WCBS, family members of the deceased cried in court as details of the slaying were read aloud. Prosecutors say that Parker was staying at Kiefer’s house when the victim returned to retrieve her credit card. Kiefer requested the card back from her ex when, according to a witness cited by law enforcement, the brutal incident occurred on the woman’s own lawn.

Suffolk County District Attorney Timothy Sini said that Parker “pulled her out of the car” and that it initially appeared Parker was “punching” his victim. That read on the situation quickly gave way to a different interpretation of the scene, however, as it became clear to the witness that Parker allegedly had a “knife in his hand.”

Kiefer had just moved back to Long Island several months ago and was living with her grandmother when she was killed. The violent incident is alleged to have occurred right in front of Kiefer’s friend and her friend’s 1-year-old child as they sat in the car from which the victim was dragged.

“She was with her friend and they drove back to the residence and he was there,” Sini told NBC’s flagship New York City affiliate WNBC. “And an argument ensued and the defendant attacked. The defendant attacked the victim in cold blood. And stabbed her approximately 40 times — all over her body.”

Their relationship was reportedly “an abusive situation” for some time, one neighbor told the television station.

Law enforcement officials say a neighbor reported an injured woman around 4:45 p.m. on Saturday. The victim was found laying still on the grass with multiple stab wounds and was rushed to nearby Stony Brook University Hospital, but by then it was already too late. She was pronounced dead as she arrived.

Parker was arrested on Sunday by homicide detectives who allegedly caught him en route to North Carolina at a Port Authority bus terminal. Police say the defendant initially gave a fake name before his arrest.

The defendant has multiple prior convictions including strangulation and assault, according to Albany NBC affiliate WNYT.

He pleaded not guilty to the second-degree murder charge on Monday during an arraignment at the First District Court in Central Islip. His defense attorney said “no comment, no comment” as the proceedings ended and an interview was requested by a collection of assembled reporters.

While appearing in court, Parker could reportedly be seen with a large bandage on his hand. According to the prosecution, the alleged killer sought aid for a wound at a hospital and said that he had accidentally cut himself.