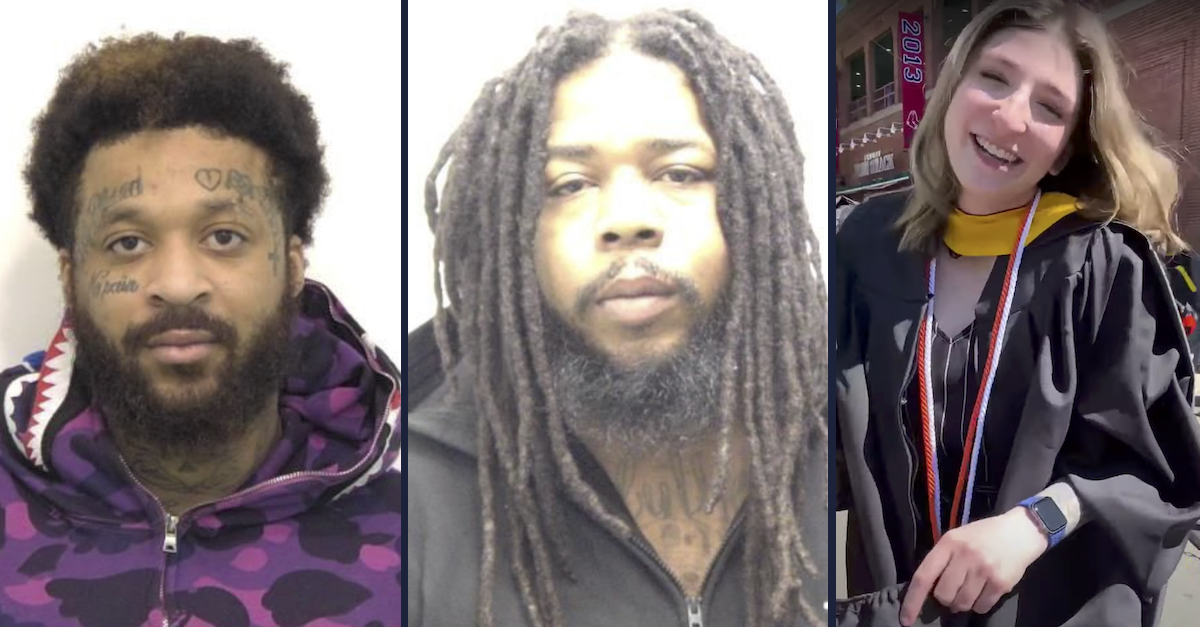 Two Rhode Island men were recently indicted for the drive-by shooting death of a young woman and speech pathologist who was standing on the street and talking to her friend last summer.

Shawn Mann, 31, and Isaiah Pinkerton, 25, each stand accused of murder for the Aug. 1, 2021 shooting death of 24-year-old Miya Brophy-Baermann, who police believe was an innocent bystander.

“This senseless act of gun violence has had a profound impact upon so many that were close to Miya, as well as the greater community,” Providence Public Safety Commissioner Steven Paré said in a statement obtained by Providence CBS affiliate WPRI.

Miya was a selfless person who will be remembered for her infectious and optimistic personality. She made complete strangers feel welcomed and treated everyone equally and as a friend. She had an unbelievable work ethic for her own goals and the causes she believed in. In her pursuit of social justice, Miya lived the experience many just talk about.

In her 24 years, Miya grew to be an astonishing woman, daughter, sister, granddaughter, and niece.

Her parents, Michelle Brophy-Baermann and Bryan Brophy-Baermann, have since started a scholarship fund in their daughter’s name. The fund is called “Miya’s Voice,” and information is available here.

“The last few years, I saw her really blossom into someone who could do so many things at once yet still care for other people,” the woman’s father told WPRI. “She wasn’t doing it just for herself, she was doing it so she could help others, and the pride that comes with that is amazing.”

Miya Brophy-Baermann died weeks after turning 24 following a trip to visit her parents in New Hampshire, with whom she had dinner the night of her death. Later, back in Warwick, Rhode Island, she was shot and killed.

“I did not choose to be born the way I am with privilege, but that is my life,” a quote attributed to the deceased on the scholarship fund’s website reads. “I can either live with the guilt of having the privilege or I can spend time actively working to break down the systemic injustice and racism using my voice and amplifying voices that are not so readily heard.”

According to The Providence Journal, Miya Brophy-Baermann’s death “had been a public mystery for more than a year” and generated a harsh reaction in the smallest state in the nation by geography.

“It took a while [for us] to learn that she was just standing by her car saying goodbye to a friend and someone shot her,” the deceased woman’s mother told the aforementioned TV station. “We don’t really know a lot more than that, in part, because I don’t think we’re ready to know.”

According to law enforcement, Mann and Pinkerton were charged in a secret indictment handed up on Wednesday.

Pinkerton was also charged with possession of a firearm by a prohibited person.

“For over a year, this Office and the Providence Police Department have sought justice for Miya and her family, and with today’s indictment, we are one step closer towards achieving that goal,” Rhode Island Attorney General Peter F. Neronha said in a Friday statement. “I am grateful for our ongoing partnership with the Providence Police Department and the hard work by the investigative team over the past year that led to this week’s indictment.”