This Man Was Cellmates with Sister’s Convicted Rapist. He Beat Him to Death. 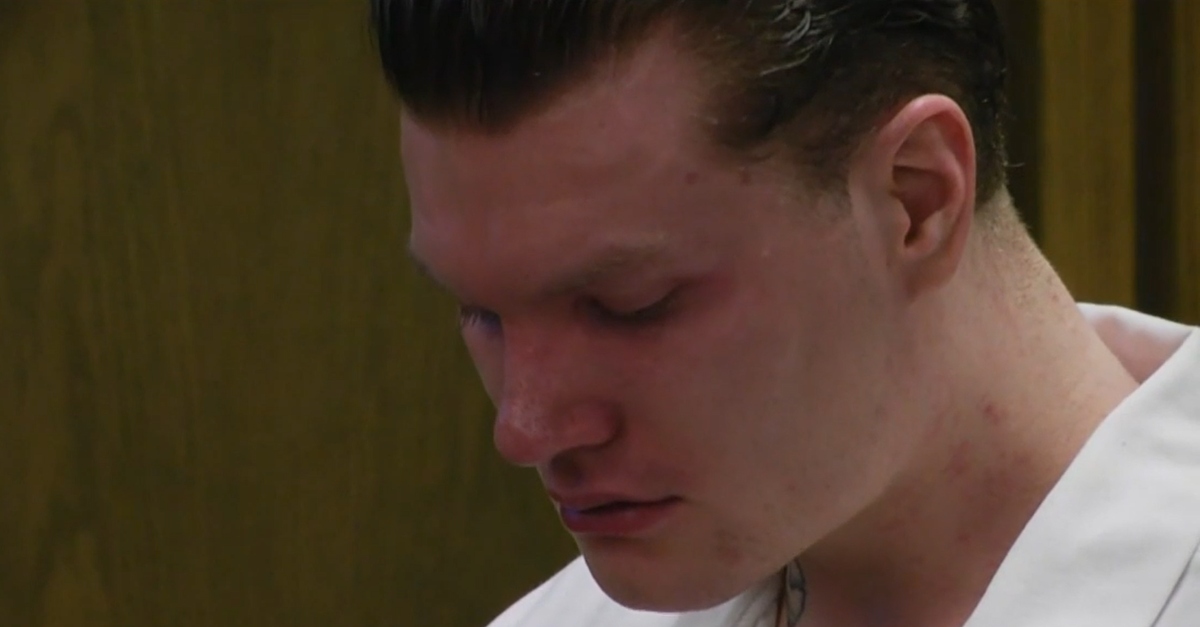 Shane Goldsby at his sentencing hearing for killing Robert Munger.

A man has been sentenced for murdering the individual convicted of raping his sister. Shane Goldsby, a 26-year-old inmate in Washington state, learned his fate Tuesday for killing Robert Munger, 70. He must spend 298 months in prison after pleading guilty to second-degree murder, according to KHQ. That is more than 24 years.

“I feel it’s my duty to make sure that you don’t get out any time soon,” Cowlitz Superior Court Judge Michael Evans said at the 2019 sentencing hearing, according to The Spokesman-Review.

Munger was a given a 43-year term but was unlikely to survive it because of his advanced age. Someone got to him first, however. Out of all the inmates in the Washington state prison system, he ended up in a cell with Goldsby. The younger man beat him to death, striking him about 14 times in the face and head, stomping his head at least four times, and kicking him “a couple more times before walking away,” according to court documents obtained by KHQ.

No one appeared more surprised than Goldsby that they were put in a cell together.

“I was in shock, dude,” he said in a 2020 interview. “I was like, ‘What the fuck?’ You’re talking out the blue they sent me to the same institution, the same unit, the same pod in the same cell as the dude that got locked up because of what he did to my little sis.”

He described it as getting a jackpot in a casino seven times. Goldsby asserted, however, that he tried to get himself out of the situation by telling guards, but he was dismissed. In his account, the tipping point arrived when Munger told him details of the abuse.

“About the photos and videos of him doing this stuff, and it was building up,” Goldsby said.

It is worth mentioning that the 70-year-old displayed erratic behavior amid his 2019 sentencing hearing. Munger had been on suicide watch in jail and, according to a prosecutor, was reluctant to eat or cooperate with staff, according to the Spokesman-Review’s coverage. From his courtroom holding cell, Munger reportedly made a “rambling” 21-minute speech in which he complained about the case, discussed the media, and even made reference to then-President Donald Trump. He seemed to faint before the judge’s sentencing decision.

Prison staff did not know that Goldsby and Munger were previously linked until after the murder, according to a Washington State Patrol investigation into why the two were put in the same cell. For example, authorities said the relatives involved had different last names. Goldsby asserted last year that prison guards did not want to even hear his concerns before the killing.

“When I showed up in that unit, I walked out of that pod, went to an office and said, ‘Hey, I need a new cellie.’ And the correctional officers in that office was like, ‘What? No. We didn’t call you.'” he told KHQ. “Then I went back to my cell. We got something in there called a button. You hit it if something’s going on. So, I hit that button too and nobody came on that mic at all. So, in my head, I’m not in my head at this point and time. I’m completely feeling like this is what they wanted to happen.”

Goldsby was in prison for a 2017 incident in which police said that he, a stabbing suspect, fled from officers and rammed his vehicle into a Washington State Patrol vehicle, injuring a trooper. He also said in the KHQ interview that he repeatedly butted heads with prison guards. The outlet paraphrased him as saying he had “more than 20 altercations” with officials while locked up.

Goldsby last year wondered if he would spend the rest of his life in prison.

Goldsby is scheduled to see the light of day, but by the time that happens, so much of his adult life will have passed him by. The reported logic behind the 24-plus year sentence under the plea agreement is so Munger’s wife would not be alive to see him released, the prosecutor said.

Goldsby appeared regretful in his sentencing on Tuesday, getting so overcome with emotion that his defense lawyer had to finish reading the statement on his behalf.

“I cannot imagine what it would be like to lose a loved one in this kind of way,” the statement read. “To his wife and his whole family I apologize. I am so sorry and I hope you are able to heal from what I caused.”