‘That’s the One I Shot Him With’: New York Man Allegedly Admitted to Killing Son with Shotgun Blast to the Chest on New Year’s Eve 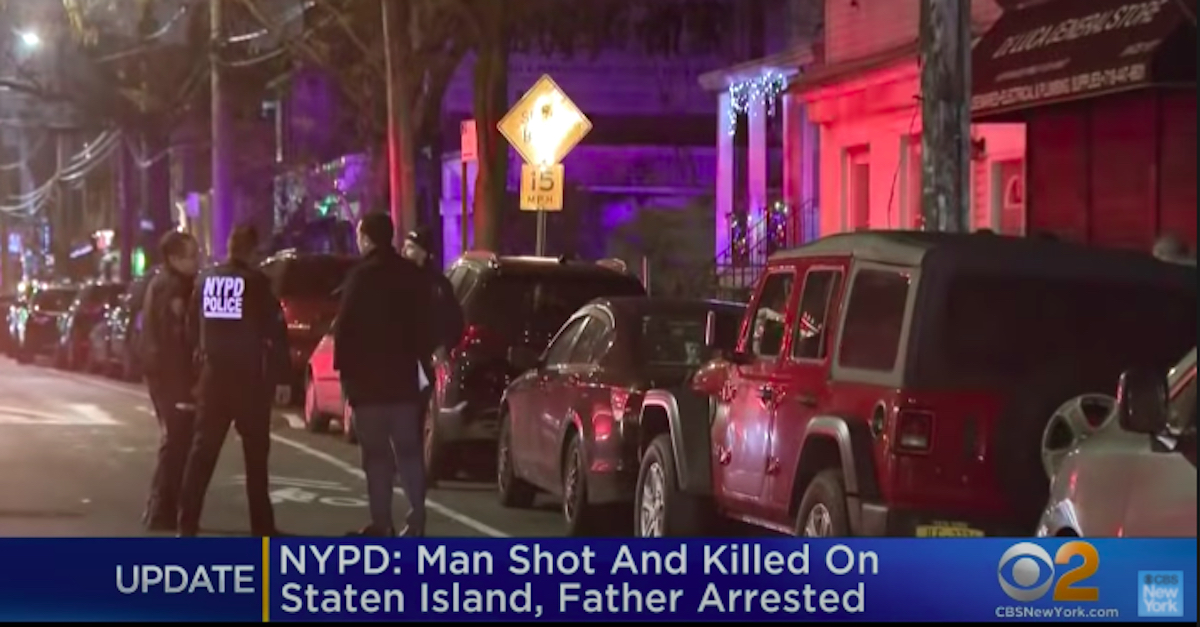 NYPD outside the home of Joseph Leone after his son was fatally shot.

A 57-year-old man in New York City shot and killed his son on New Year’s Eve, then confessed to the crime when police arrived, authorities say. Joseph Leone Sr., of Staten Island, has been charged with one count each of second-degree murder, manslaughter, felony assault, and criminal possession of a weapon in the death of his 29-year-old son, Joseph Leone Jr., the Staten Island Advance reported.

Officers with the New York Police Department responded to a 911 call about shots being fired at a residence located in the 1200 block of Bay Street in Rosebank. Upon arriving at the scene, first-responders reportedly found Leone Jr. on the sidewalk in front of his father’s home having suffered an apparent gunshot wound to the chest. Emergency Medical Services personnel attempted life-saving measures and rushed Leone Jr. to Staten Island University Hospital but he succumbed to his injuries and was pronounced dead a short while after arriving at the facility.

According to a criminal complaint filed by prosecutors with the Richmond County District Attorney’s Office, Leone Sr. promptly told police that he was responsible for the fatal shooting and told officers that he threw his guns in the trash after firing on his son.

“That shotgun in the garbage can, that’s the one I shot him with,” Leone Sr. allegedly told investigators on the scene. Police reportedly recovered two shotguns, four shells, and multiple boxes of ammunition for .45-caliber and .44-caliber firearms from the father’s home.

The victim’s wife, Kimberly Leone, told the Advance that her husband had a fraught relationship with his father, who beat him often growing up, saying those memories drove her husband to be a much better dad to their three children.

“Joe always told me, ‘I don’t want to be like my father,’ and he definitely lived up to that,” Kimberly reportedly told the outlet on Sunday.

She told the New York Daily News that her husband went to visit his father after the elder Leone fell down a flight of stairs in his home and called his son asking for help with addiction.

“He said, ‘I’ll have to go up there and help my daddy recover from alcohol,” she told the Daily News.

But according to Kimberly, once Leone Jr. got to New York, his father continued to go to local bars and get drunk. She reportedly said that Leone Sr. even threatened to shoot his son several days before New Year’s Eve, but her husband did not think his father was being serious.

Leone Sr. is being represented by an attorney from the Legal Aid Society.

“Joseph Leone is a former U.S. Marine with no criminal record. He is presumed innocent, and we caution the public from making any rush to judgement. We will have more to say on this matter in the coming days, weeks and months,” S. Maquita Moody, a Senior Supervising Attorney with LAS’s Staten Island Trial Office, said in a statement.

Leone Sr. is currently scheduled to appear in court on Jan. 6.