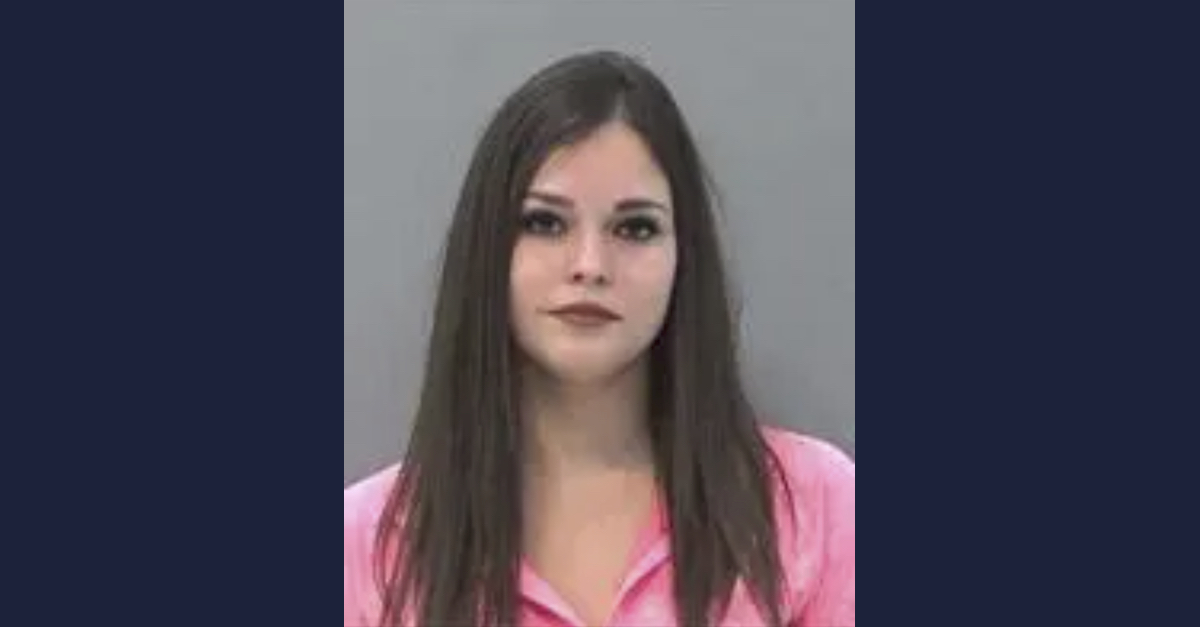 A Texas woman and business owner was arrested and charged in connection with a viral video that allegedly shows a homophobic attack.

Evan Noelle Berryhill, 28, stands accused of assault because of bias or prejudice, a hate crime in the Lone Star State, in connection with the April incident.

“Guess what, motherfucker? I will fucking park here,” the woman identified as the defendant says in the video as it begins. The clip then cuts to the woman inspecting a bumper sticker on another car. She appears to read the sticker aloud: “‘I prefer eating out.’ Imagine that. Imagine that.”

The man behind the camera filming then mocks the woman.

“Imagine that,” he says. “Yeah. I get more dick than you. That sucks.”

The woman, who was then walking away, quickly turns around and re-engages:

As the woman approaches the man filming, she appears to make contact with him in an unidentified way. The microphone on the device recording registers what sounds like some source of contact.

The man responds as if he had been touched.

“Umm, if you touch me one more time, I am gonna have video evidence that,” he says as the woman cuts him off.

She interjects: “Okay, video this. You’re [sic] fucking faggots need to learn that equality is what I got. How are you any better than me?”

In the video of the incident that went viral, TikTok narrator @thatdaneshguy cuts in to criticize the woman. He says that her car is double-parked and that her neighbors are “understandably upset.” The social media post then accused the woman identified as Berryhill of being “clearly inebriated while driving.”

@thatdaneshguy♬ Who Will Save Your Soul – Unedited Master Take – Jewel

The video then shifts back to the incident itself.

The person filming then sarcastically laughs and says: “Go Trump.”

“Yep,” the woman says as she raises her hands into the air in a celebratory fashion. “Republican all the way, baby. I’m sorry not sorry that I’m not a fucking Joe Biden fan. How do y’all like fucking pain?”

As the political insults continue, the man behind the camera says: “We hate Joe Biden. No, we don’t like Joe Biden.”

The woman then raises her voice into a higher register and says, in a whining, taunt-like fashion as she dances towards and then raises two middle fingers to the camera: “Oh, oh you don’t like Joe Biden?”

Another voice off-camera then says something about being libertarian.

“Excuse me, I can’t hear you over your ear piercings,” she says, raising a hand as if in offense. “Eww.”

After that, she walks back to her car’s open door as the second voice calls out: “Will we gross you out enough for you to move over a space?”

She says: “I don’t give a fuck that y’all are faggots.”

The man filming then says he has videos of her spouting the homophobic slurs referenced above.

The man repeats that he has said video evidence.’

“I know,” she says. “You’re wearing a fucking bellybutton ring and fucking booty shorts. Like. I’m sorry not sorry that I’m not fucking…”

The video ends with the narrator identifying the woman as a “wannabe influencer” and then cuts to a scene where the woman says: “Hey, what’s up. I am Evan Berryhill and I will park here.”

According to San Angelo, Texas-based CBS affiliate KLST, Berryhill was booked into the Tom Green County Detention Center on Monday, Aug. 8, and then quickly released after posting $1,000 bond.

According to The Advocate, the couple targeted in the video (which reportedly spans 14 minutes in its entirety) were originally hesitant to press charges until Berryhill returned later in the night to cover their door and vehicles with offensive Post-It Notes, including some that said “faggot.”

“I’m from Dallas, which is conservative but less conservative than San Angelo,” Charles Hardy, who filmed the encounter, told the paper. “My partner is from [San Angelo], and never in their life has it been this bad.”

Berryhill reportedly told an independent website that she has been receiving death threats and doesn’t have the money to hire a lawyer.