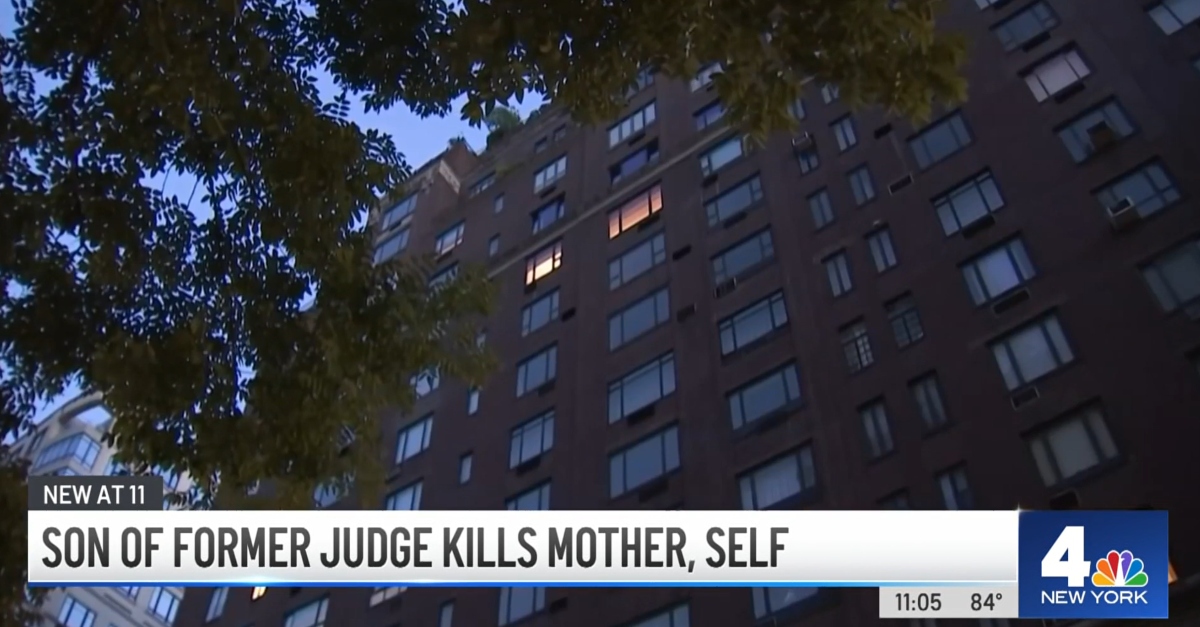 The Manhattan building where the Solomon-Gallagher family lived.

An adult son allegedly beat his mother to death and jumped out of the family’s luxury apartment, falling 16 floors to his death.

“On Tuesday, July 19, 2022 at approximately 1029 hours, police responded to a 911 call of an aided individual at 180 East 79 Street, within the confines of the 19 Precinct,” cops said in an email to Law&Crime. “Upon arrival, police observed a 26-year-old male unconscious and unresponsive, with trauma to the body. The injuries of the individual are consistent with falling from an elevated position. Upon further investigation, officers discovered a 65-year-old female inside of apartment 16D unconscious and unresponsive with head trauma. EMS pronounced both the male and female deceased on scene.”

Doug Solomon beat his mother to death at their luxury co-op home Tuesday and jumped naked out of the building, police and law enforcement sources said in a New York Post report. Investigators believe the murder weapon specifically was a bedside lamp found near Diane’s body, according to sources for WNBC. Gallagher suffered blunt force trauma, sources reportedly said.

The suspect was discovered naked and bleeding in the courtyard of East 79th Street building at around 10:30 a.m., according to the Post.

“It was the loudest thud,” a building resident, who declined to give his name, told the outlet. “At first I thought it was an air conditioning unit.”

He said he looked down, and “he” — Doug Solomon — was below the resident’s window “butt naked.”

Based on abrasions on Doug’s body, authorities suggested that he squeezed out through a narrow bedroom window, according to WNBC sources.

“I heard a bunch of voices,” the neighbor, who lives several floors below the Solomon apartment, told the Post. “I thought it was construction workers arguing.”

Gallagher had a daughter planning to get married.

“She’s just one of the most amazing people,” longtime friend and neighbor Martine reportedly said of Gallagher. “Bright, articulate, dancer.”

The family had no reported history of domestic violence or mental health problems, but according to sources for WNBC, Charles Solomon told investigators his son had dropped out of college and engaged heavily with alcohol and marijuana. The former judge reportedly said he and Diane discussed their son’s future the night before. Solomon said his son and wife were asleep when he left for work at around 8:30 a.m. that day.

The former judge reportedly said he was not close with his son, but Diane was.

He described Doug Solomon as having a temper and that his son could get frustrated when not getting his way.

Authorities did not suggest a motive in the suspected murder-suicide.

Charles Solomon reportedly returned to work with the Manhattan District Attorney’s Office in 2018 after retiring from the bench. As a judge, he presided over rapper Sean “Diddy” Combs‘ nightclub shooting trial, and also presided over charges against woman who allegedly blackmailed former New York State Gov. Elliot Spitzer (she only pleaded guilty to attempted petit larceny against another man).