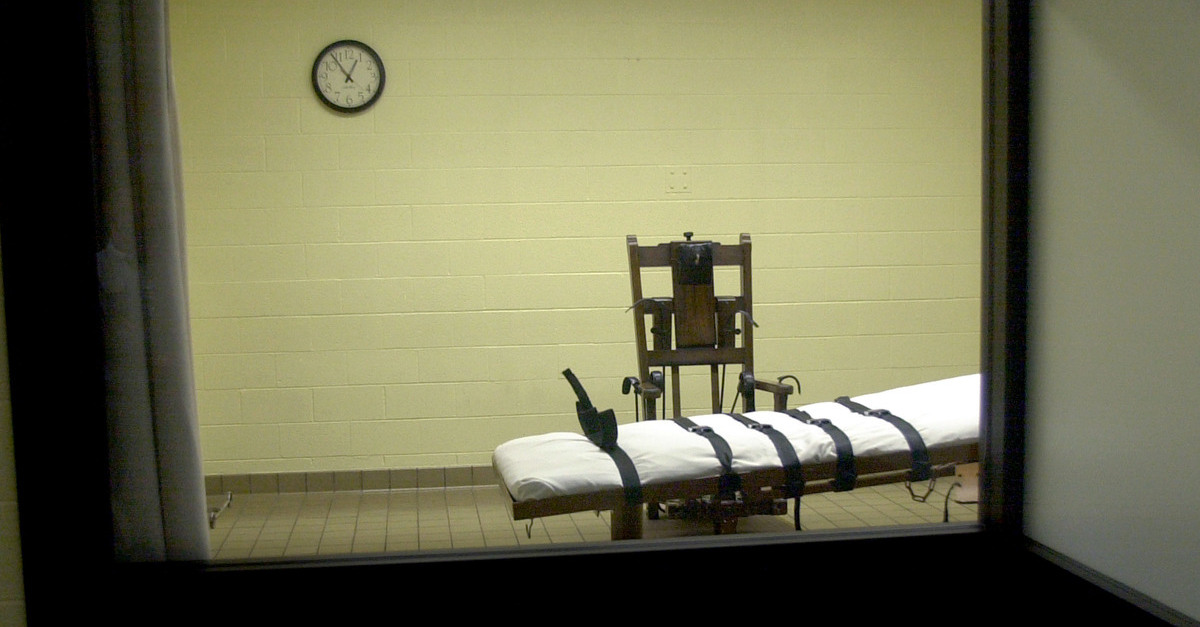 A view of the death chamber from the witness room at the Southern Ohio Correctional Facility shows an electric chair and gurney August 29, 2001 in Lucasville, Ohio. The state of Ohio is one of the few states that still uses the electric chair, and it gives death row inmates a choice between death by the electric chair or by lethal injection.

A sharply divided U.S. Court of Appeals for the Sixth Circuit upheld the death sentence of an Ohio man convicted decades ago for the gruesome murder of a young boy, with a 9-7 panel rejecting the argument that he was too intellectually disabled for execution to be legal.

Passionately criticizing that finding on Friday, the dissenting judges skewered the majority for disregarding the collective findings of “teachers, administrators, psychologists, and even the Ohio courts.”

Danny Hill was sentenced to death for the 1985 murder of 12-year-old Raymond Fife, who had been beaten, sexually tortured, strangled with his underwear, set afire and left for dead. He died two days after family members found him. Both Hill and his co-defendant Timothy Combs were convicted of Fife’s murder. Combs, who had been under 18 at the time of the murder, was not eligible to receive a death sentence and died in prison at age 50 in 2018 while serving a life sentence.

His federal public defender, Vicki Werneke, claims that Hill’s conviction was the product of a coerced confession of a then-18-year-old Black teenager with developmental disabilities, unsupported by legitimate physical or forensic evidence.

“Despite overwhelming evidence of Danny’s life-long intellectual disability and the State of Ohio conceding that he is intellectually disabled, a slim majority of the federal court of appeals found the habeas statute prevented them from vacating the death sentence,” she wrote in a statement.

Hill, who had been 18 at the time of the crime, was sentenced to death by the trial court. Though Hill still maintains his innocence, appellate arguments have revolved mainly over his intellectual capacity to face the death penalty. A federal appeals court initially answered that question in the negative, overturning his sentence some three years ago. At the time of Hill’s conviction, there had been no restrictions on executions of the intellectually disabled, but a 2002 Supreme Court case later held that such a sentence violated Eighth Amendment guarantees against cruel and unusual punishment.

A unanimous three-judge panel of the Sixth Circuit ruled in Hill’s favor in 2018. U.S. Circuit Judge Gilbert S. Merritt Jr. (a Jimmy Carter appointee) wrote the opinion, laying out the three-pronged framework for a legal finding of intellectual disability:

(1) the individual exhibits significant deficits in intellectual functioning—indicated by an IQ score “approximately two standard deviations or more below the mean,” or roughly 70;

(3) the deficits arose while the individual was still a minor.

There had not been any dispute about the first prong, as Hill’s IQ was found to have been between 48 and 71 — clearly within the proscribed range. However, the state disagreed with Hill’s position on the second and third factors. Ohio argued that Hill had insufficient “adaptive deficits,” and that Hill’s diagnosis came too late to make execution improper.

The initial panel sided with Hill, finding that he had demonstrated an “‘inability to learn basic skills and adjust [his] behavior to changing circumstances’ since a very young age,” and that Hill struggled with school and received special education services from the age of 6. Even as an adult, “Hill could barely read or write,” and as an inmate, “could not perform even the most basic cleaning tasks without close supervision.” As a child, Hill “could not remember to comb his hair, brush his teeth, or take a shower without daily reminders,” and “[e]ven in the highly structured environment of death row, Hill would not shower without reminders.”

After a rehearing en banc, however, a slim majority of the 16-judge Sixth Circuit bench issued an opinion Friday taking issue with the relevance of information about Hill’s cognitive abilities during his incarceration. The court held that “his time incarcerated may be an imperfect indicator of his functional abilities.” U.S. Circuit Judge Julia Smith Gibbons (a George W. Bush appointee), writing for the majority, noted that “[p]rison officials are also not trained to diagnose intellectual disability,” and that Hill required no special accommodations to perform his prison job.

Furthermore, the majority rejected Hill’s argument as to the timing of the court’s evaluation of his mental ability.

“If intellectual disability is not a transient condition,” wrote Gibbons, “then the outcome should not change if the court evaluates a defendant’s abilities at the time of the crime or at the time of a later Atkins hearing.”

Ultimately, the Sixth Circuit court found that the Ohio Court of Appeals reasonably relied on the testimony of medical professionals in making its determination that Hill was not “intellectually disabled” for purposes of the death penalty.

The dissenting judges accused the majority—and their equivalent state court—of overlooking the obvious, noting that even the Ohio Court of Appeals found Hill to be “essentially illiterate,” displaying “poor word and concept recognition” and allegedly “deficient” in his motor skills.

“There is no getting around it—Hill is intellectually disabled,” U.S. Circuit Judge Karen Nelson Moore, a Bill Clinton appointee, wrote. “To deny the obvious is unreasonable.”

Moore characterized the majority’s ruling as against the weight of decades of evidence.

“Long before the Supreme Court decided Atkins, teachers, administrators, psychologists, and even the Ohio courts all determined that Danny Hill is intellectually disabled,” she wrote. “Voluminous records and observations detail Hill’s significant struggles with academics, self-care, and other adaptive skills. At the time of Hill’s sentencing, none of those determinations carried any constitutional significance in barring the State from imposing the death penalty as Hill’s sentence for his conviction. But they mattered.”

“Danny has been on death row for over 35 years, but the bare majority found it was reasonable for the state courts to use his ‘current’ functioning to find he has no deficits despite the fact Danny was identified as intellectually disabled while in prison and he has significant deficits even to this day,” she wrote.

Update—Aug. 23 at 3:08 p.m.: This story has been updated to include comment from Hill’s public defender.