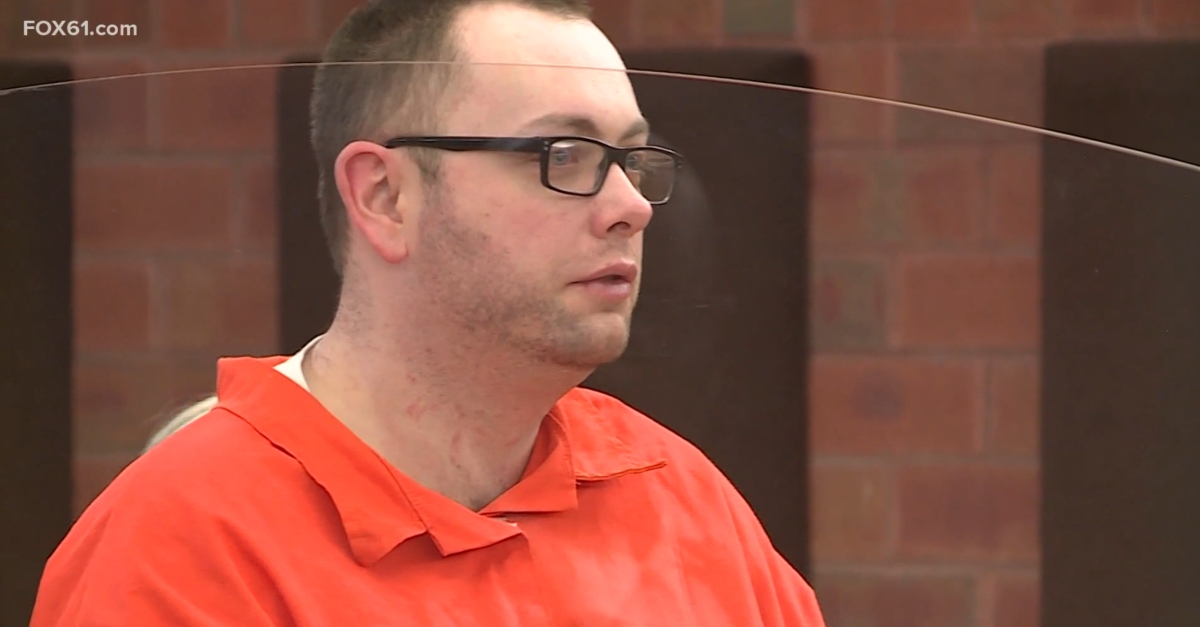 A sex offender has been sentenced to 35 years in prison for killing a jogger in a fit of rage fueled by self-pity.

William Winters Leverett, 30, admitted to chasing down Melissa Millan, 54, while she was on a nighttime jog in Simsbury, Connecticut, in November 2014. Leverett fatally stabbed her in the chest and abandoned her after she fell onto the street.

He confessed in 2018 after turning himself in to police.

Police have said that Leverett admitted to them that he came across Millan while she was jogging. He didn’t know her, but he drove to catch up with and meet her. He admitted that he got nervous, according to the cops, and that he believed he couldn’t “have her” and “she’s way out of my league.”

Leverett said he became angry and “went into a frenzy.” He ran toward her on foot, forcing her to stop running, and stabbed her once in the chest, police said. Leverett then left her for dead as she repeatedly said, “Oh my God.”

Millan, a senior vice president at MassMutual Mutual Life Insurance Company, was found unresponsive on the street. Leverett had punctured her heart and a lung.

Millan’s children Zeke and Tori, who were respectively 15 and 12 at the time of the murder, did not appear in court at Leverett’s sentencing on Tuesday, but their statements were read on their behalf, local Fox affiliate WTIC reported.

“I’ve said little about my mom since she died,” son Zeke said in a letter read by victim services advocate Adriana Venegas McCormick. “It is not that I have wanted to erase my mom, but her absence has been too painful to acknowledge. I have grown up without one person I would have loved to share my life with.”

“My mom made every day something to celebrate,” daughter Tori said in a letter read by Prosecutor Vicki Melchiorre. “Holidays were always magical. What I also learned at the ripe age of 12 was that my mother was extraordinary. It took her absence to recognize it.”

Defense lawyer Claud Chong reportedly said at Tuesday’s hearing that his client committed the murder out of impulse, and that he surrendered to police after discovering faith. He initially confessed to a friend, who in turn reached out to pastors. Leverett repeated his confession to them at the pastors’ home.

“We told him, ‘You know what you have to do,’ and he said, ‘Yes I have to turn myself in,'” Pastor Michael Trazinski said, according to the Hartford Courant. “We were stunned. Nobody said anything for at least a minute.”

Police said they corroborated Leverett’s confession, saying that he knew details that they did not release, including what Millan was wearing. He also reportedly pointed police toward the glove he had worn during the murder that allegedly had his DNA on it. According to cops, he said he donated his bloody boots to Goodwill after cleaning them, and that he threw the knife in a trash compactor at his job.

According to cops, Leverett said that prior to the murder, he had returned home from a sex offenders therapy group. He reportedly said was feeling lonely and wanted to go out to meet people.

Leverett rejected a plea deal for the murder in March, with prosecutors offering 35 years in prison and 10 years on special parole.

Chong said that offer was “a little unreasonable,” according to The Journal Inquirer. Leverett eventually accepted the deal that led to Tuesday’s sentence.

Melchiorre said that Leverett’s autism diagnosis was considered as part of the sentencing recommendation, but it did not excuse what he did, according to the WTIC report.

“I am grateful for the fact the defendant confessed,” she said. “At least the victim’s family will have closure after eight years of waiting.”

But Melissa’s brother Matthew Millan said Tuesday’s sentencing that the end of the criminal case did not bring closure because Melissa was gone.

“Melissa was a devoted and loving mother,” he said. “Melissa‘s murder threw our family into a triage and survival mode to deal with both our individual in our collective grief and loss.”

Leverett apologized when his time to speak arrived.

Online records show that Leverett has been convicted of sexual assault on a child. He had pleaded guilty in 2011 to abusing an 11-year-old girl who was a friend of his sister, according to The Hartford Courant.

In addition to the 35 years in prison, Leverett must also serve 7 years of special parole, according to WTIC.