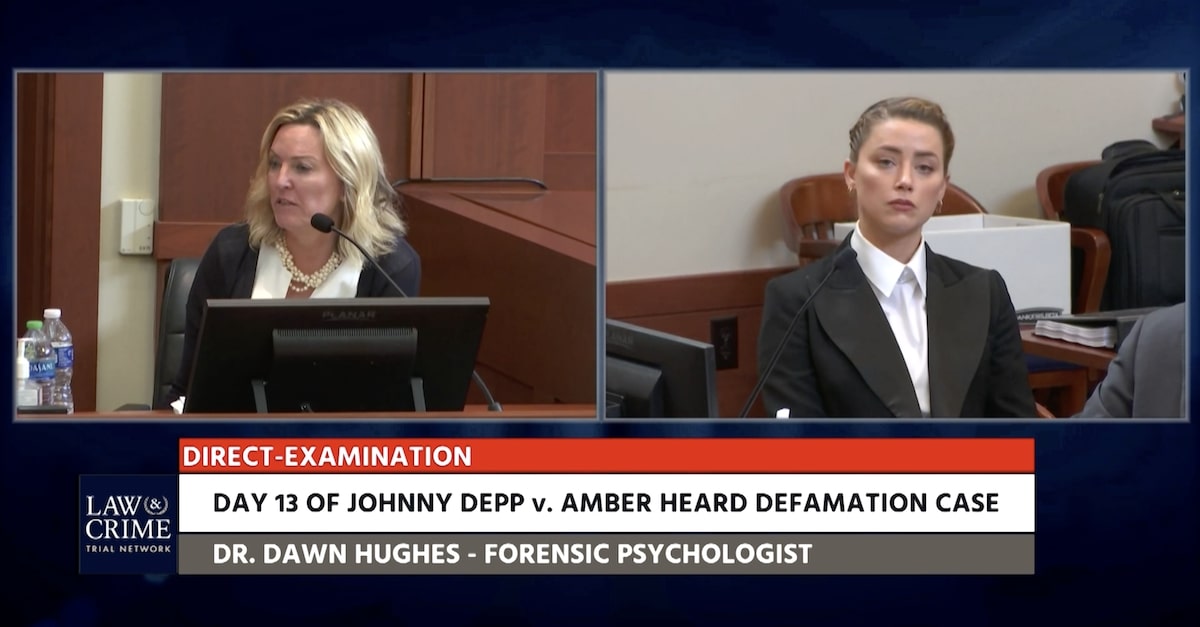 Within the span of one short week, a jury has heard dueling portraits of actress Amber Heard as someone living with multiple personality disorders and a traumatized victim of domestic abuse with an otherwise clean bill of mental health.

Heard’s forensic psychologist Dawn Hughes has spent the better part of two days painting a diametrically opposed picture. Hughes told a jury that Heard did not have any disorders and that she had PTSD.

“In order to meet criteria for post traumatic stress disorder, you have to have an actual cause,” Hughes said. “It’s one of the few diagnoses diagnostic entities that we have to have a cause for, and the cause was the intimate partner violence by Mr. Depp.”

Both experts said that they used scientific and rigorous methods to reach their conclusions.

Curry testified that she relied in part on a test she administered called the MMPI-2, a set of 567 questions that are short for the Minnesota Multiphasic Personality Inventory. For the PTSD findings, Curry cited another structured interview known as a CAPS-5, where Heard allegedly reported 19 out of the 20 possible symptoms of trauma.

Even those with the “most disabling” forms of PTSD do not score that high, Curry said.

Hughes flatly disagreed with that approach, saying that she performed tests for malingering, the legal term for faking or exaggerating illness. Heard scored a “zero” on it, she said. Hughes claimed that Heard’s score on MMPI-2 suggested a “normal profile.”

Both sets of counsel tried to discredit the dueling experts on cross examination. Heard’s attorney Elaine Charlson Bredehoft noted that Curry was not board certified, a credential attained by few forensic psychologists. Curry also acknowledged that she agreed to testify following food and drinks at Depp’s home with his legal team.

Depp’s attorneys noted that Hughes is being paid $500 per hour and noted that she habitually referred to victims of domestic violence with male pronouns and perpetrators with male pronouns in her testimony. Hughes said that was because she reached the conclusion that Depp abused Heard. She acknowledged that Heard engaged in what she called “low level” violence in reaction.

Depp disputes that, claiming that he is the victim of physical and emotional abuse. He is suing Heard for describing herself as a survivor of domestic violence in a 2018 Washington Post op-ed, which did not refer to him by name but alluded to allegations she made during their acrimonious divorce two years earlier.

In his most serious allegation, Depp claims that Heard threw a broken bottle at him that sliced off his finger. Heard claims that Depp did this to himself—and told hospital personnel just that.

Heard has her own horror stories involving a liquor bottle and sexual assault.

Hughes said that she learned of an incident where Depp grabbed a bottle and “shoved it up her.” Heard’s thought at the time was “I hope it’s not the broken one,” Hughes said.